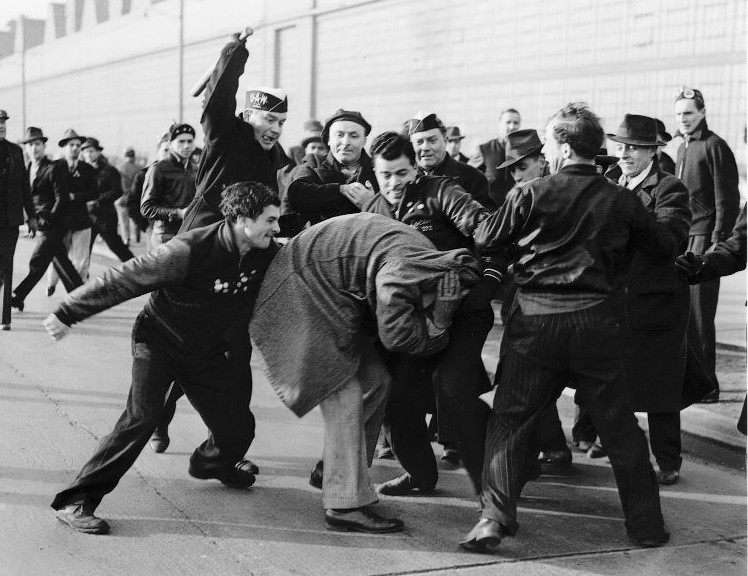 Milton E. Brooks captured his Ford Strikers Riot in April of 1941 and received his Pulitzer prize for a year later. This photo was the very first to win the Pulitzer in the Photography category. This category existed from 1942 till 1965.

The first strike in Ford history

The story of this photo starts with a single layoff of the employee at the Ford plant in Detroit. Henry Ford just received his Honor Cross from the Nazis, the economy grew, and it seemed like the Great Depression was in the past. Although, people still remembered its hard times painfully reacting on firing people for no or little reason. That was the case of pre-war April of 1941.

The group of Ford workers agreed to participate in picket and calling everyone to stop working and join the strike. ‘Ford Strikers Riot’ photo captured the moment when strikers assaulted the worker who tried to pass through them. Interestingly, there was advice from the City Police Department not to try and access the building until the strike will settle down. So it was a moment when the confrontation with the protesters became fiery. Ford strikers stunned the man with an unexpected punch, and the fight began. In the photo, the break-through man is attempting to block the blows, covering his head and face with his coat. Picketers caused some severe damage to this unknown man. He had to get to the plant hospital for immediate treatment, as there were symptoms of concussions.

Ford employees’ strike attracted a lot of public attention. The crowd gathered around the plant building where picketers were protesting. Local newspaper  Detroit News photographer Milton E. Brooks was among the observers. Milton had a nickname “One Shot Milton” for his excellent stilled moment pictures. He operated a challenging type of camera that took several seconds to reload itself before the next shutter. Here’s why Milton E. Brooks had to select his capture moment carefully.

Milton wasn’t the only cameraman on that day. But while other reporters focused on the picket line, Brooks stayed ready to capture the conflict situation between the protesters and the worker trying to enter. When the action began, Brooks drew the camera from his pocket, pressed the shutter, and quickly disappeared in the crowd. He saw that protesters already went ballistic, and were ready to assault anyone who opposed them. The images could trigger unnecessary aggression. “Those guys seemed to be ready to kill me just to get my camera and waste that picture.”

Milton recalled that he was afraid that someone captured the same or almost-the-same image. He hurried back to the newspaper office and pushed the image to the next-day publication. After publication, the photo “Ford Strikers Riot” won Milton Brooks, the first Pulitzer Prize in photography in 1942.

Noteworthy, the father of Milton Brooks was also a newspaper reporter. He worked at The Detroit News from 1928 to 1953. Afterward, he became a commercial photographer.

The Last Stand of Salvador Allende

The raising flag on Iwo Jima

[…] in 1943. It was a second Pulitzer prize awarded in a Photography category. The first one went to Milton E. Brooks for his ‘Ford strikers riot,’ a year before. This Pulitzer category existed from 1942 till […]