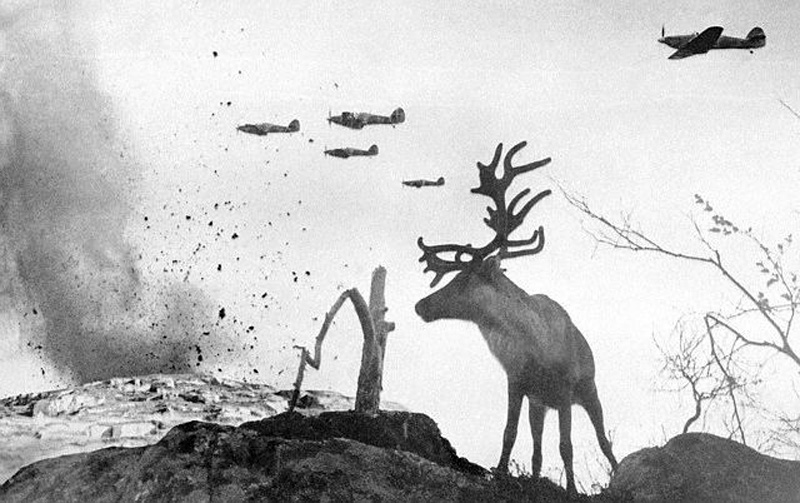 The name of this photo is Reindeer, called after the German operation during the WW2. This offensive aimed to capture Petsamo (an area in Finland on the border with the Soviet Union) to seize nickel mines. The Reindeer operation started on June 22, 1941, and proceeded without incident. On June 29, the German plan changed, and the whole operation was renamed to ‘Platinum Fox.’ The new goal was the city of Murmansk. The Soviet Photojournalist Yevgeny Khaldey was covering the Russian defense activities. It was a time when he made this striking shot in which the beast’s natural beauty confronts the killing machines.

The Reindeer is not the only famous photo that Yevgeny Khaldey took. The best-known picture is, of course, the Flag over the Reichstag, 1945. The ‘Flag’ picture hit the Top 100 most important photos in history.

Oldpics also published a story behind another amazing photo by Yevgeny Khaldey: The Nazi family in Vienna, 1945.

How the reindeer appeared in the combat operation photo

But now, let’s get back to the Reindeer operation photo. In his works, Yevgeny Khaldei liked to combine everyday life and war. He photographed a sunbathing couple next to a destroyed building, the head of the traffic control service next to the sign of German cities in Russian, etc. He used a similar technique with the Reindeer photo. True, the photo with the reindeer was not entirely documentary. The book “Witness to History: Photos by Yevgeny Khaldei” tells about this shot. During the bombardment, the deer (Russian called it Yasha afterward) approached soldiers. The shell-shocked animal did not want to be left alone. Khaldei took a picture, but it turned out not as spectacular as the correspondent expected. Through multiple exposures, Khaldei added British Hawker Hurricane fighters and an exploding bomb to the shot.

The Reindeer operation did not bring success to the German-Finnish army. Neither the Germans nor the Finns reached the Murmansk railway, nor did they seize the Soviet fleet’s base in the Far North. In this sector of the war, the front stabilized until 1942.

Check our publications of the best Soviet WW2 photography: