Raising a Flag over the Reichstag by Yevgeniy Khaldei,1945 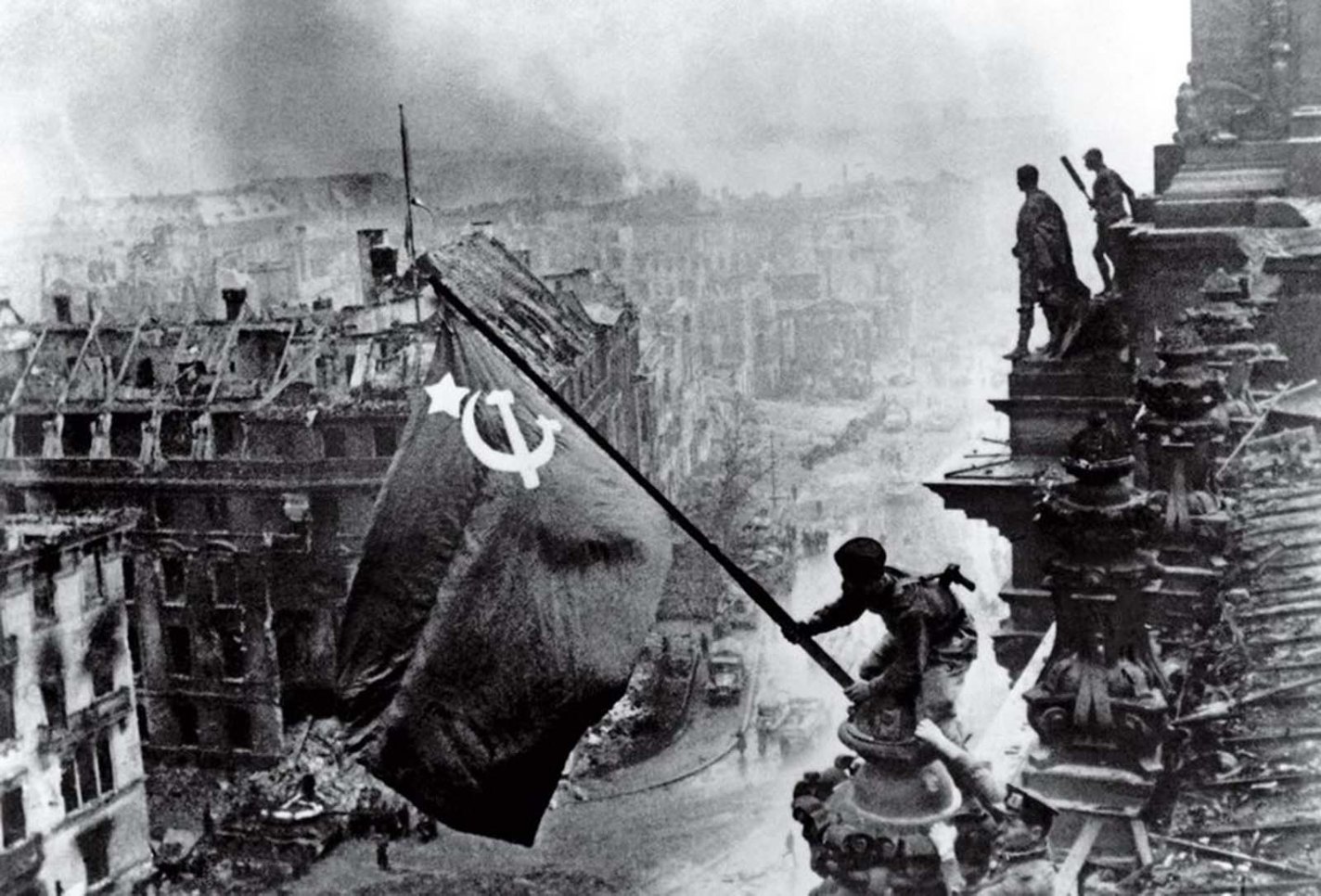 Yevgeniy Khaldei, the Ukraine-born soviet photographer, underwent through World War 2 side by side with soldiers. He walked half of Europe and documented many historical events on the road from Murmansk to Berlin, ending up his WW2 adventure with the ‘Raising a Flag over the Reichstag’.

The ruins of cities, soldiers during battles, rare moments of rest and fun, civilians who have lost everything, many deaths. Photographer pictured everything he saw without caring about the censorship of totalistic propaganda.

Raising a Flag over the Reichstag is featured in Top 100 most influential photos in history, according to Times magazine.

The photo of Raising a Flag over the Reichstag is often compared with Raising the Flag on Iwo Jima, and they have a lot in common: both were made not in the actual date of victory, both became symbols of the fall of Axis regime and its supporters, and both became art objects.

The backstage of the Raising a Flag over the Reichstag is quite simple: a photographer arrived in Berlin one day after the actual Victory flag was already there. The whole Reichstag was then studded with Soviet flags of victory. Khaldei did not find the very moment that is shown in the famous photograph, and he staged it.  When he saw a clear point of view, Khaldei asked random soldiers were walking nearby to put the flag, pretending it’s the first time. These soldiers were  Aleksei Kovalev from Kyiv, Abdulkhakim Ismailov from Dagestan, and Leonid Gorychev from Minsk. At that moment, Reichstag was burning,  half the dome was gone, and two of four sculptural towers were still in the place. On a pedestal of one of these towers, the Khaldei took his picture. Choosing a good composition, he shot on two film rolls with his Leica 3 with a 35mm f3.5 lens camera. The fact that the photo was staged did not bother anyone.

The flag was made by Khaldei’s distant relative, Israel Kishitser, a tailor by profession from the fabrics of three tablecloths he took in some canteen.

Before publication on 13 May 1945 in the Ogonyok magazine, it was hardly edited: retouchers added drama to the composition with heavy dark clouds over Berlin on the backstage.

Except for such noticeable changes, also, the image of the soldier was edited: he had two watch-looking-like devices. To avoid scandal with blaming for marauding, one object (probably hand compass) was removed from the soldier’s hand.

Yevgeny Khaldei wasn’t prized for his photos in the USSR, but his exhibitions in Europe were very popular. In 1995 he received the Médaille of Chevalier of The Ordre des Arts et des Lettres in France.