At first glance, Sting does not look like a person about whom you can tell something unusual or show some unseen photos. But not for the Oldpics! Moreover, we decided to mention not only Sting photos but a few fantastic videos. And yes, we know that we’re the ‘Old Pictures,’ not the Old Videos. 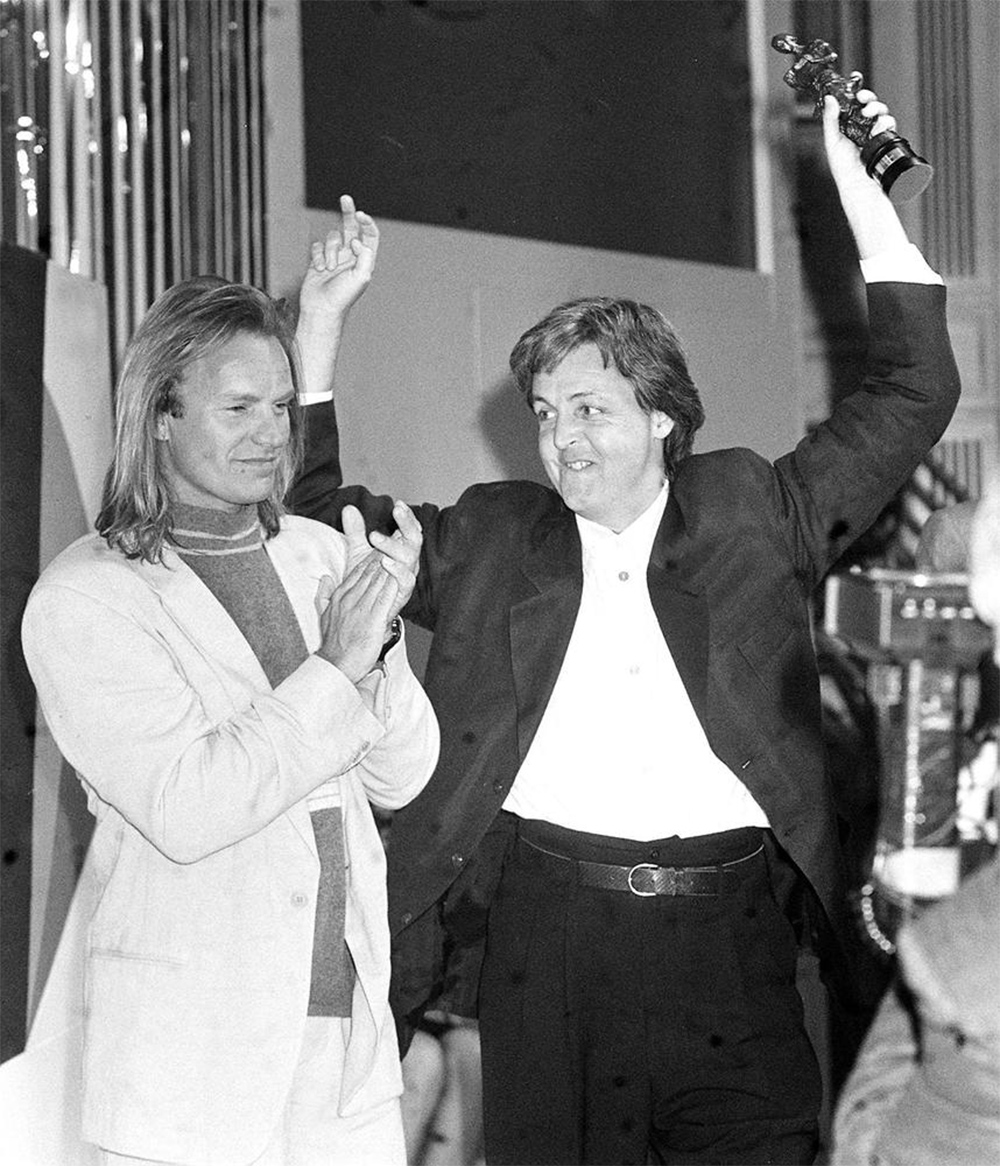 Sting and Paul McCartney, 1989. McCartney said he would like to be the author of a song like Fields of Gold

Sting nickname stuck to the musician due to his younger years’ performances in a bee costume (check one those photos below). Well, not precisely a bee, but still wearing a sweater with black and yellow stripes.

By the way, another gifted kid, Neil Tennant, co-founder of the Pet Shop Boys duo, went to the same school with Sting. Neil was only three grades younger.

Check out our collection of Early photos of famous musicians. 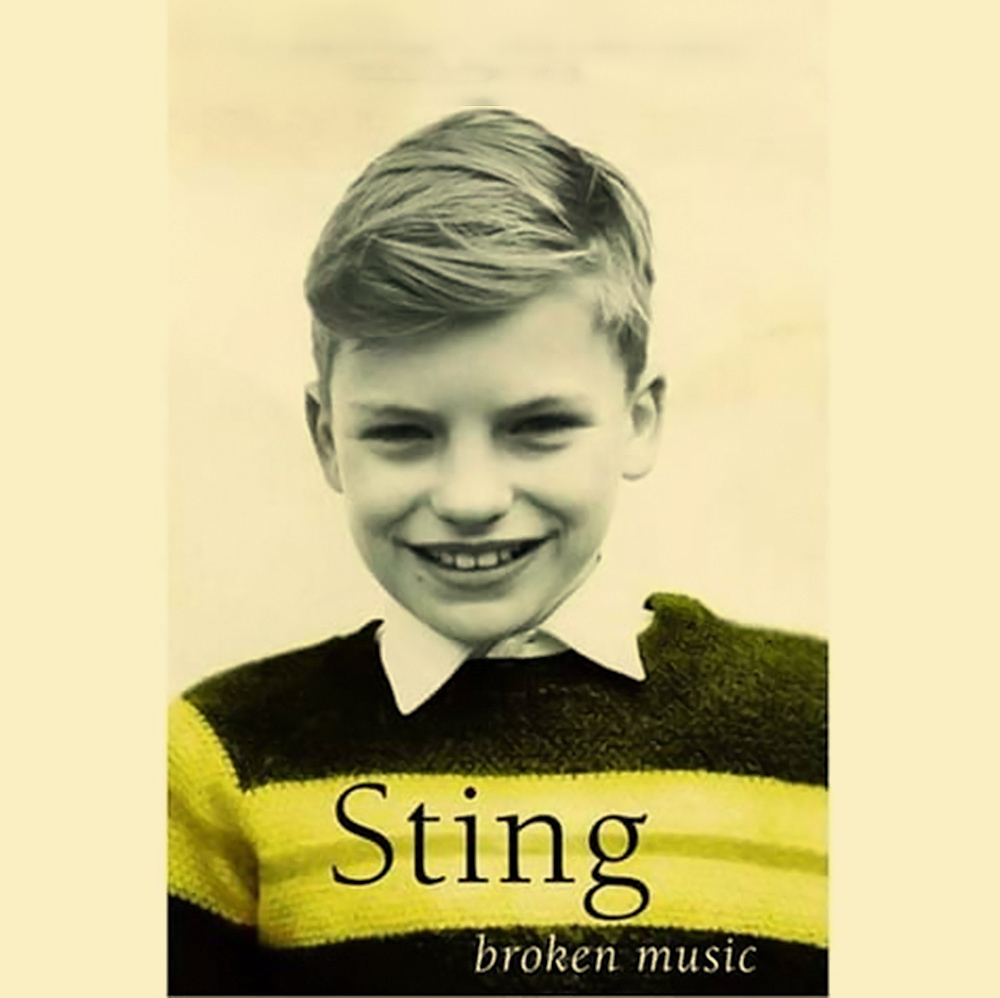 On October 2, 1951, the singer was born in the north of England in Wallsend’s port city. Like many yet-not-famous-rock-stars, he has tried a million professions: bus conductor, football coach, English teacher. There was a time when he was a tax collector. It was the worst job, according to Sting. 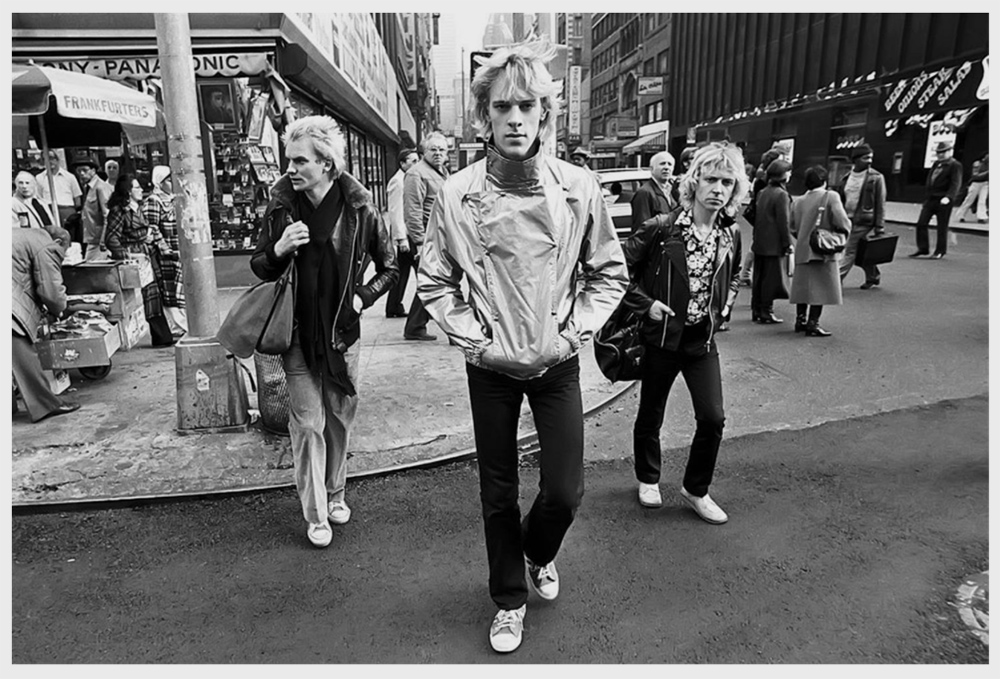 In the beginning, Sting shared his popularity with two bandmates from The Police. The band released their first album in 1978, and it also featured the early hit “Roxanne” (which was initially born not as a reggae song at all, but as a lullaby for a baby). 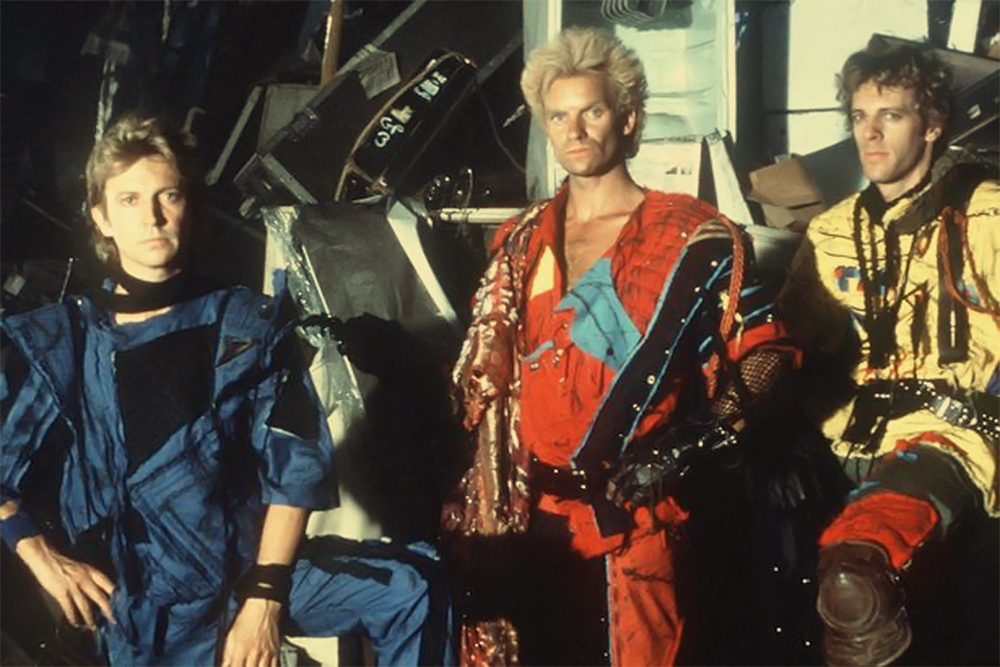 The Police have always appeared in public in the form of ash blondes. And this image has a bright background!

In 1977, the gum manufacturer Wrigley commissioned a commercial and hired a little-known English director, Ridley Scott. The video required an unnamed rock band with dazzling blonde hair. The unknown guys from The Police agreed to participate. The advertisement did not hit the air, but the group decided to use the white-haired image during their performances. 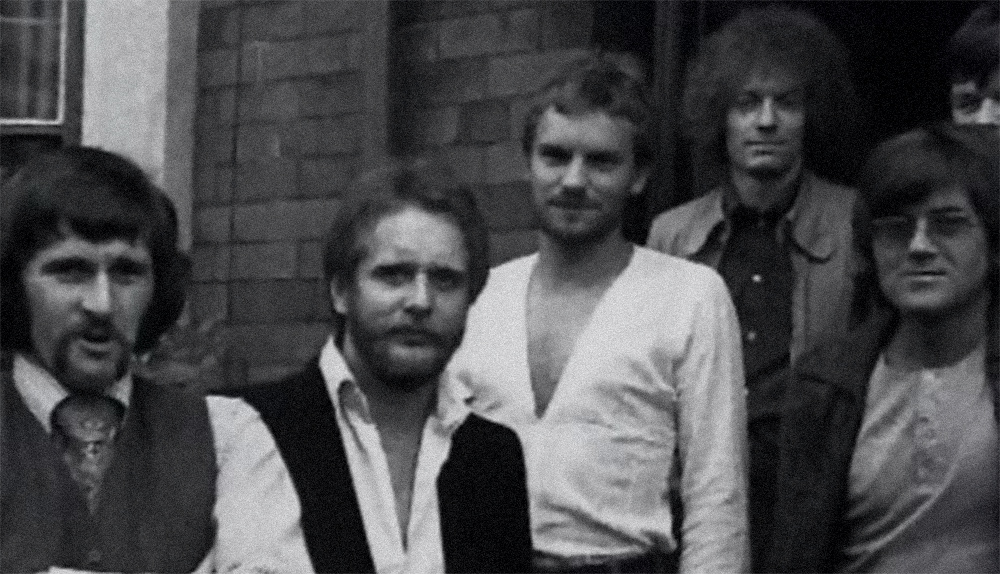 Sting (center) during the game in the Last Exit group, the mid-70s

Sting had a chance to play chess with Garry Kasparov. He took part in a show match against the grandmaster in 2000 in New York. It was a simultaneous session. It took Kasparov fifty minutes to beat all five. 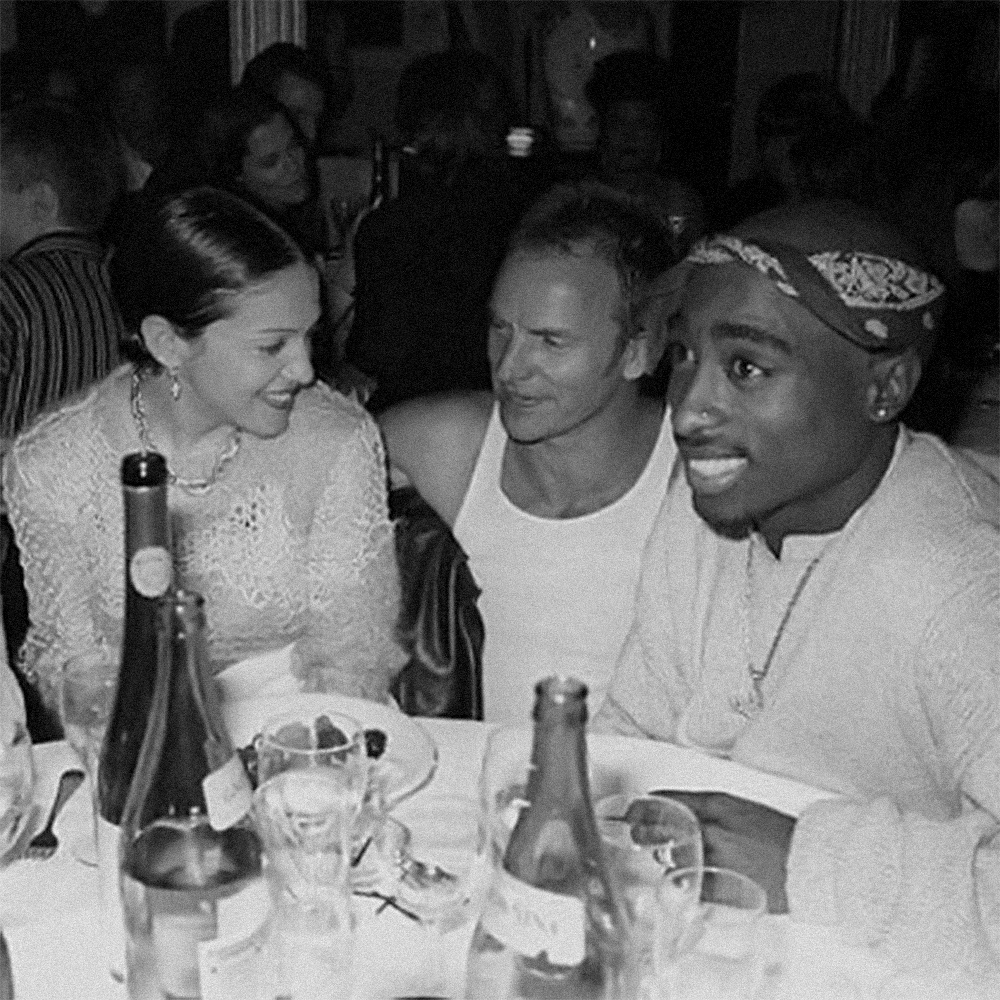 Madonna, Sting, Tupac, 1994. Three people with a one-word nickname at once.

Sting is a remarkable actor. He starred in Dune, The Bride (he played Dr. Frankenstein there), The Adventures of Baron Munchausen, and, of course, ‘Lock, Stock, Two Barrels.’

And his first film work was the role in the semi-cult drama “Quadrophenia” in 1979, based on the British band’s album The Who (and not a musical at all).

Sting also starred in the 1989 Broadway show ‘The Threepenny Opera.’ 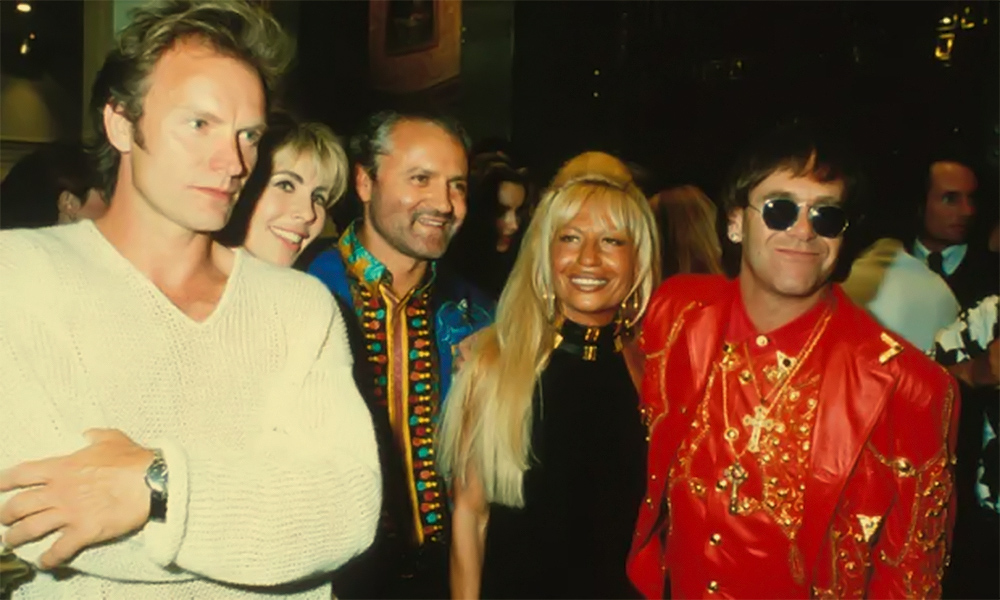 Sting with Gianni and Donatello Versace and Elton John. Sting is one of the patrons of the AIDS Foundation, which Elton founded.

Every reference book and Wikipedia will tell you that Sting’s full name is Gordon Matthew Thomas Sumner. However, Sting himself does not associate himself with this name in any way. Back in 1985, a journalist called the musician Gordon in an interview. Sting immediately replied: “My children call me Sting, my mother calls me Sting. Who the fuck is Gordon?” 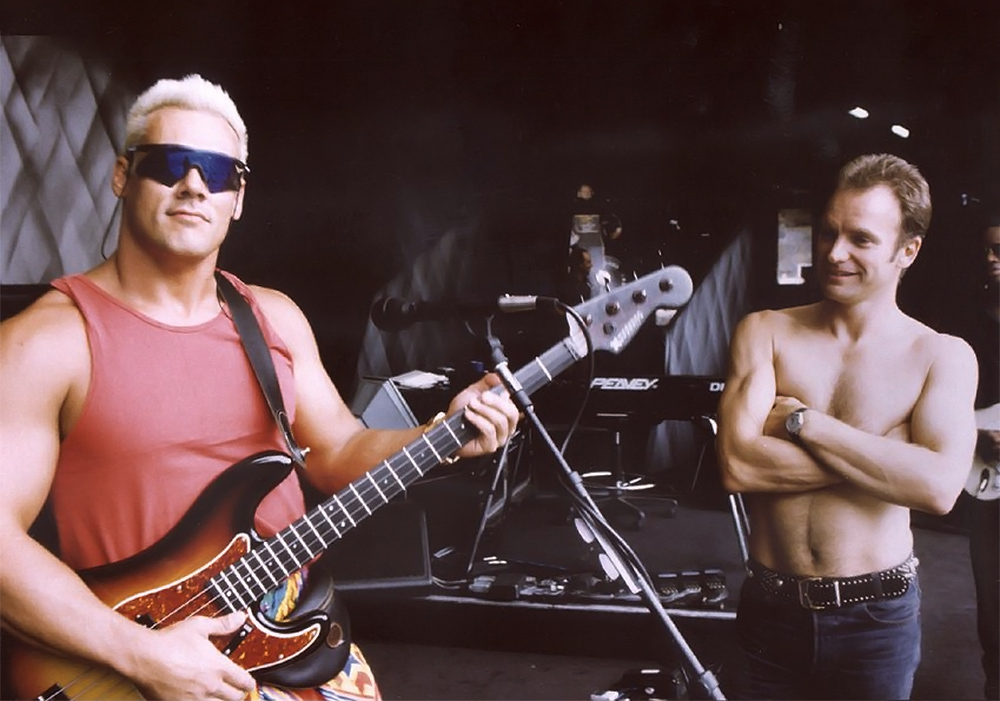 Two Stings in one photo. Guess who is a musician and who is a wrestler?

Unlike most successful bands that fell apart at their peak due to squabbling and irreconcilable ambition, The Police had a very different case. It’s just that the time has come.

Sting recalled that on August 18, 1983, they performed at the legendary New York stadium Shea (where The Beatles themselves played at the height of Beatlemania). And right during the show, the artist felt that he had conquered Everest. There is no higher mountain to climb. Therefore, The Police were paused, without an official disband.

However, other musicians look at the situation a little differently, assuring that, in any case, they are tired of Sting. 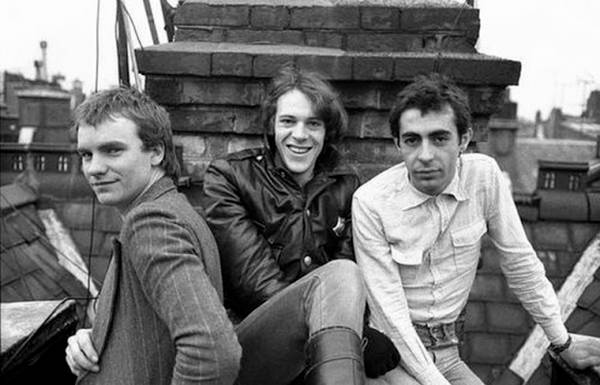 Early photos of Sting and The Police, 1977

The award-winning American wrestling star Stephen James Borden also has a nickname Sting. Interestingly, he claimed it earlier than a musician did. Therefore, when Sting had to buy the rights for the pseudonym from the wrestler.

It is Sting who sings, “I want my MTV” in Dire Straits’s “Money for Nothing.” From now on, you will listen to this song in a completely different way, sorry.

Sting doesn’t want to be featured in a biopic, as is actively encouraged these days. “I am absolutely against it. I don’t want that. I already describe my life through art. “

And Sting doesn’t want his many children to inherit a $ 400 million inheritance. According to the musician, for them, it will become a yoke around their necks. Besides, Sting hopes to spend all this money in full!