The story behind ‘The Terror of War’: ‘Napalm Girl’ by Nick Ut. 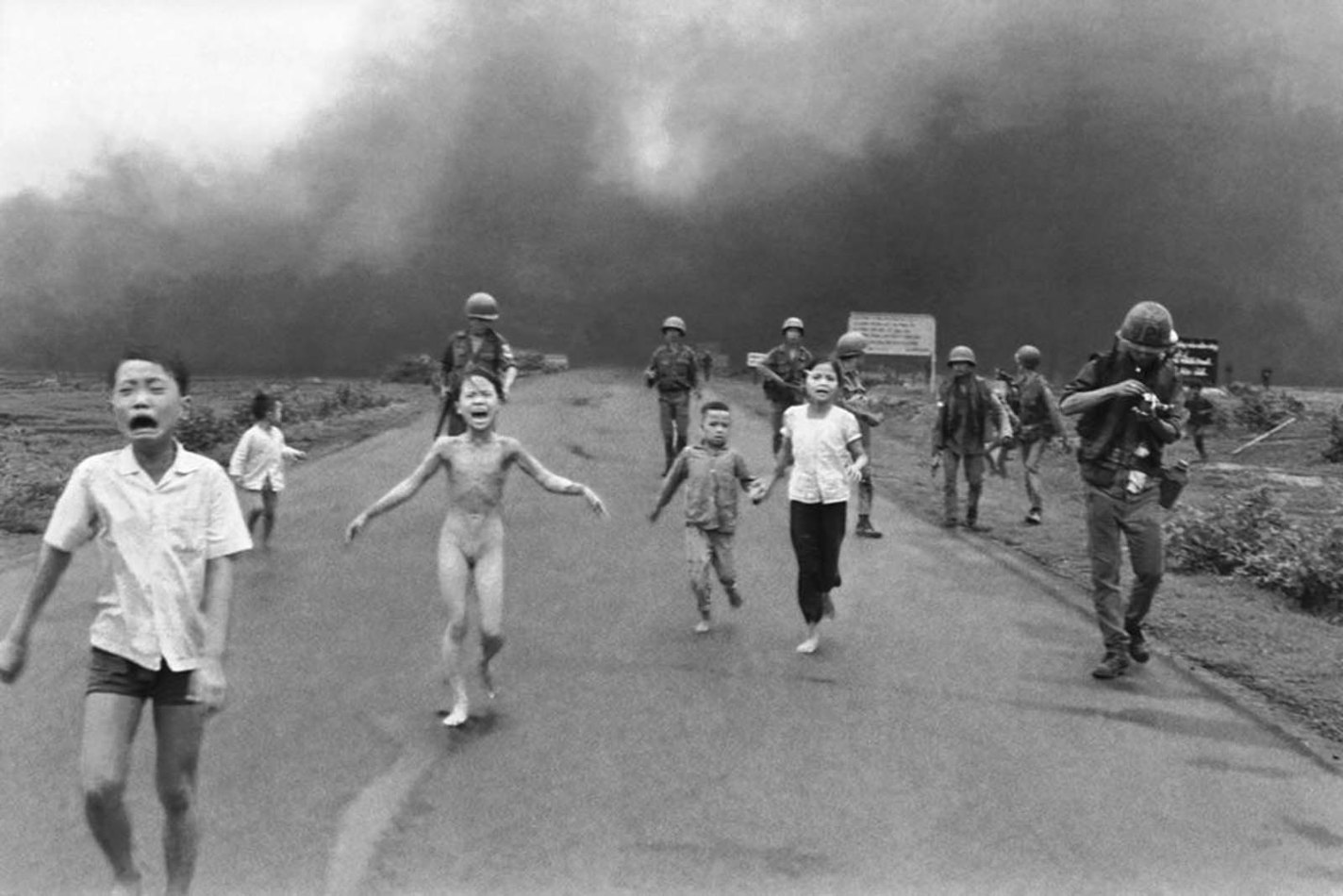 ‘The terror of war’ or also known as the ‘Napalm Girl,’ is a Pulitzer Prize-winning photograph by photojournalist Nick Ut, a Vietnamese American photographer. The latter captured the historical events of War in Vietnam while working for the Associated Press. Nick joined AP in 1966 after his brother was killed in 1965 at the age of 27. First working in the darkroom, he later became a war photographer just like his brother.

The photo we are looking at was taken with Leica M2 Kodak 400 tri x film as only 400, and 200 versions were available in Vietnam.  The camera still exists and is stored in a museum in Washington, DC.

‘Napalm Girl’ picture settled in the Top 100 most influential photos in history, according to Times magazine.

Nick Ut used to say that ‘Napalm Girl’ had a fantastic history behind it. On June 7, he heard about fighting in Trảng Bàng. Ut photographed the refugees and planes dropping bombs, captured the unseen horrors of the Vietnam war. The civilians were caught in between North Vietnamese who were trying to take control of the village and South Vietnamese troops who were trying to defend it. One of the planes dropped a napalm bomb on North Vietnamese positions. However, the bomb mistakenly hit Trảng Bàng and civilians. Kim Phuc and other villagers were hiding in the temple in the village. As the bombs were exploding everywhere, villagers ran out of the temple as they thought it would be targeted as well, when suddenly another plane dropped the napalm bombs. People were running out bomb barrage. Women were carrying burned children, the burning postures of the running people that were doomed.

When the photographer looked through, he saw terrified children and among them, a naked girl (9-year-old girl, Phan Thị Kim Phúc) running and crying. As her skin slumping down, Ut put down his camera and brought water for the girl. He picked her up and brought her to his car with other children and took her to the hospital. There he found that she might not survive because she had suffered third-degree burns on thirty percent of her body. So he helped to transfer her to an American hospital where they were able to save her life.

When he sent his picture to the AP’s office, the photo was actually about to be rejected since the rules for publishing nudity were very strict. In the end, the editors agreed that the historical value of the picture and the news is higher than the reservations about nudity, which is funny because, in 2016, Facebook censored the photograph. Mark Zuckerberg was accused of abusing his power, and after widespread criticisms from news organizations and media experts across the globe, Facebook backed down and allowed the photograph.

Like any other famous historical photograph, this one is also a little controversial. At first, some people, including then-president Richard Nixon, doubted that the photo was authentic. Nick Ut later said: “The ‘Napalm Girl’ for me, and unquestionably for many others, could not have been more real. The photo was as authentic as the Vietnam war itself.” Nixon suggested that the photo was fake, and the girl was perhaps burned with oil since no one ever survived napalm bombing until then. The picture was also initially published cropped, so the first version was published without the soldier rewinding his film. Nick Ut said in the interview on Petapixel that the soldier was David Burnett. As the civilians were running out of the fire, everyone was terrified, and all the photographers and TV cameras started taking pictures. David Burnett ran out of the film and was desperately trying to rewind it. When he finally did it, he also took photos of Kim. Now, the picture had a more significant impact without the figure of a soldier looking like not caring too much, especially when the people didn’t know he was trying to document the accident. What do you think about cropping photos like that?

Nick later said. “I wanted to stop this war, and I hated war. My brother told me I hope one day you have a picture to stops the war,” and on June 8, 1972, Nick Ut took just a picture like that, a picture that stopped the war. The photograph is said to be one of the most memorable historical images of the 20th century.

As Saigon fell, he moved out of Vietnam and eventually settled in LA. He spent more than 50 years as a photojournalist. Photographing famous historical events, politics, and celebrities, but his most known photo was taken at the beginning of his career and, in my opinion, had the most significant impact.

Ut won a World Press Photo and  Pulitzer Prize for the picture in 1973.

In 2012 he was inducted by the Leica Hall of Fame for his contributions to photojournalism.

Kim Phuc survived, and she and Nick Ut met again after the end of the Vietnam conflict. Ut said he was pleased when he looked at the picture because it changed the war history.¨

By Andrew Piper
1 Mins read
Somehow this photo of former-model Lee Miller in Hitler’s bathroom is one of the best-known WW2 photography. Its story is noteworthy, though….
Subscribe
0 Comments
Inline Feedbacks
View all comments
×
CitiesStories