The story of ‘The last stand of Salvador Allende’ photo 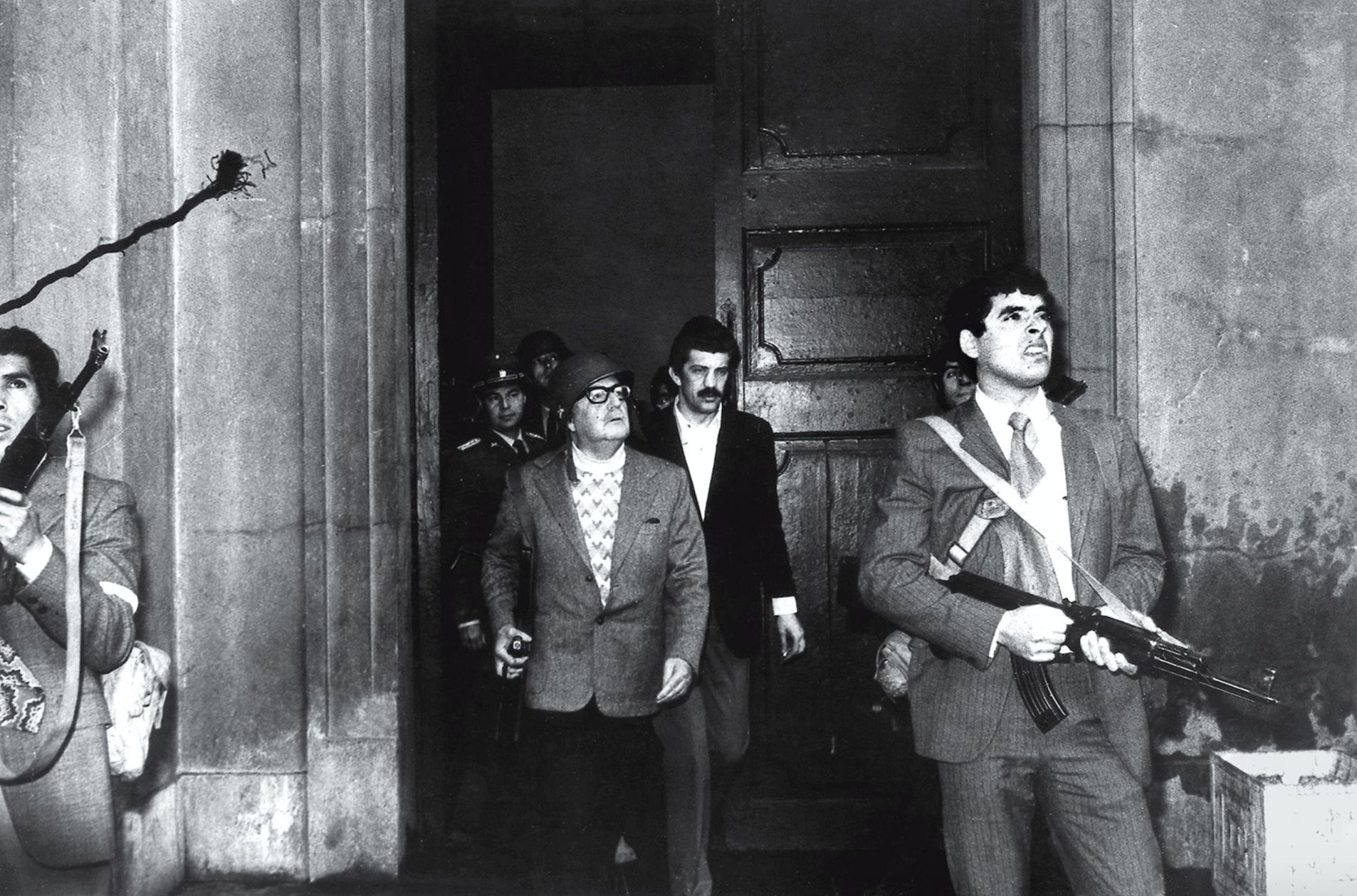 Salvador Allende leaving his palace. He will commit a suicide a few hours later, 1973.

This photo captured the moments of the life of the Chilean president Salvador Allende during the military coup in 1973. He will kill himself a few hours later, avoiding the dishonor of capture by rebelling militarians. “I’m sacrificing my life for the values of the people of Chile”, Allende said before his death. 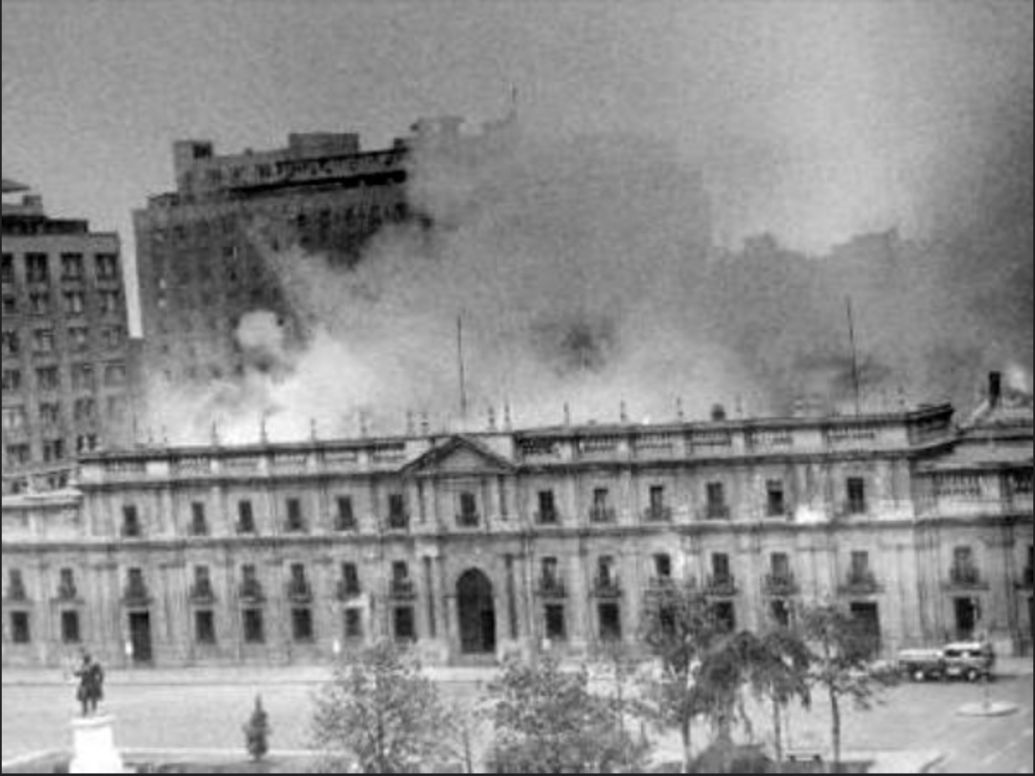 The palace of the Chilean president on fire after bomb attack of the army squads, led by Augusto Pinochet

Allende won presidential elections in 1970, standing on a ‘leftish’ Marxist platform and bringing hope for quick social justice and welfare growth. He started radical reforms, nationalized US-owned companies, deprecated land ownership, and turned all farms into collectively managed assets. The economic collapse followed these populist changes, inflation and unemployment grew dramatically, while Allende was accusing the US in undermining the monetary stability of Chile. He appointed Augusto Pinochet as Commander-in-chief in August, and this general led the military coup just two weeks later. Supported by the army and the US embassy, Pinochet distinctively gave the order to bombard to the presidential palace. 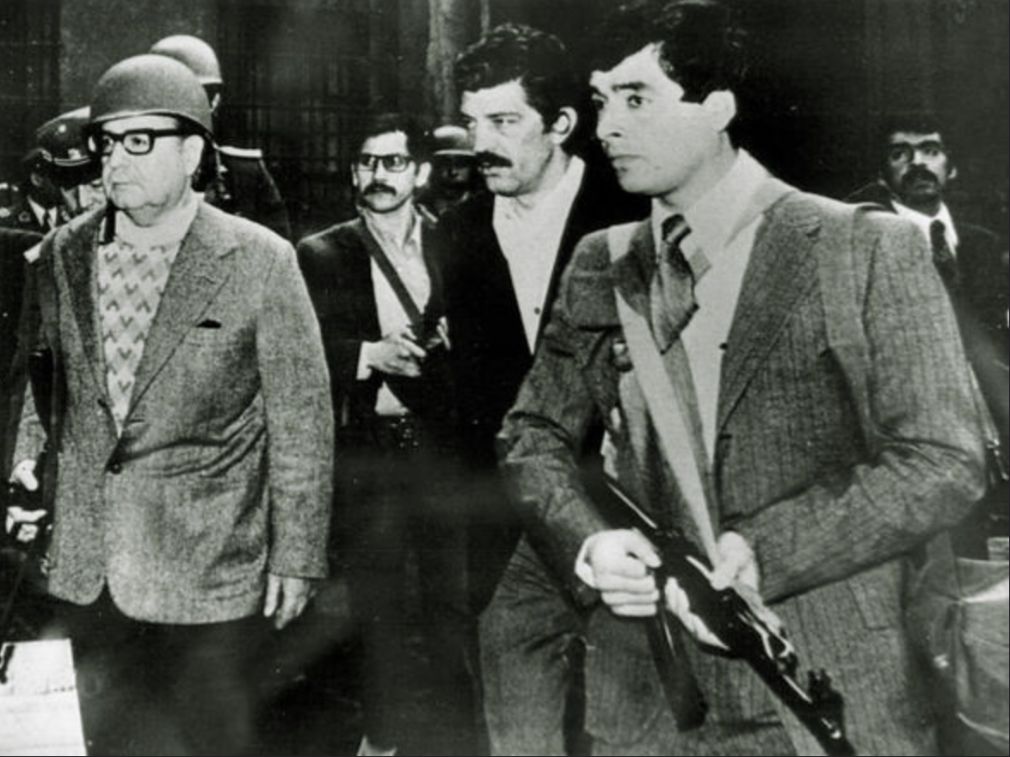 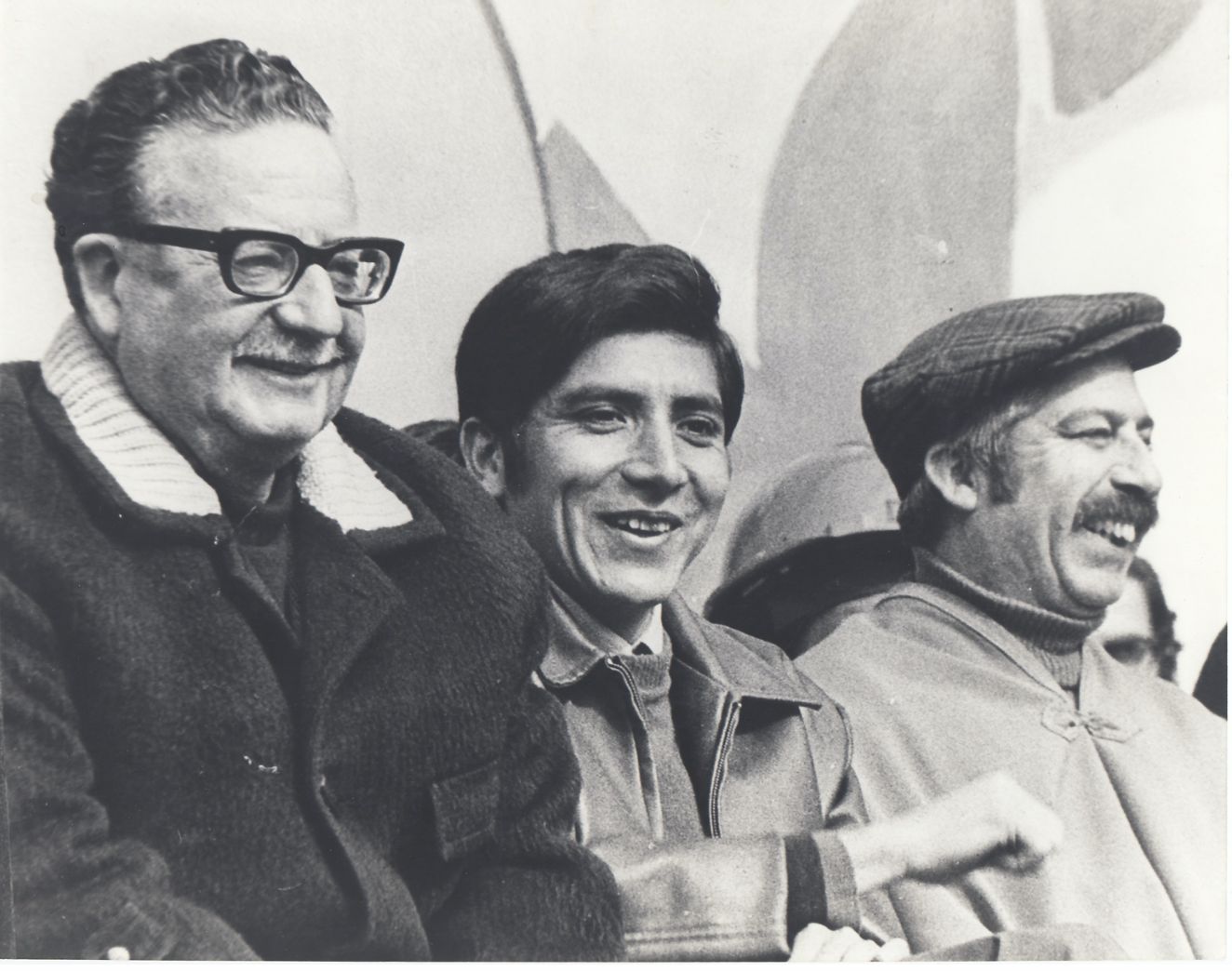 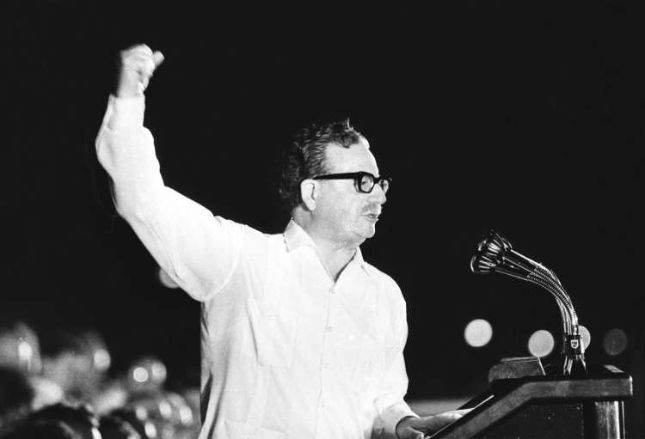 Salvador Allende during the presidential rally, 1970

This iconic ‘The last stand’ photo was taken while Allende was leaving his palace, armed with an AK-47 gun, escorted by loyal guards and administration members. 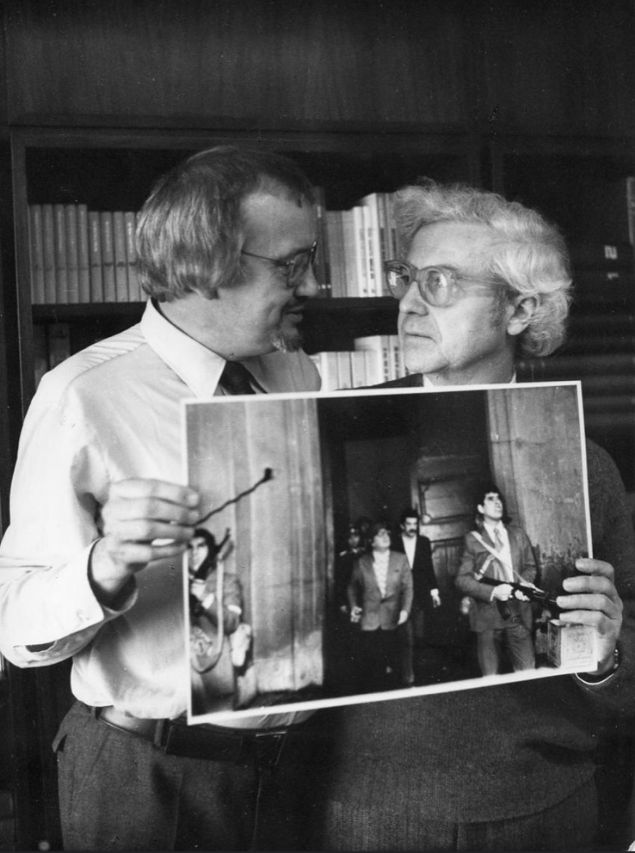 This picture, called ‘Allende last stand’, hit the newspaper months late the coup. It was first published by The New York Times and reprinted by other papers then.  The photo was credited as ‘Author unknown’ because the photographer’s name remained anonymous until 2007 when he died, and his identity was revealed to be Orlando Lagos, an ideological Marxist supporter and governmental staff photographer at the time. Interestingly, Orlando Lagos didn’t leave the country immediately, knowing that Pinochet’s regime will arrest him. He didn’t betray his Marxist views till the end of his life, attended many communist events, and communicating with such party leaders as Louis Carvalan. 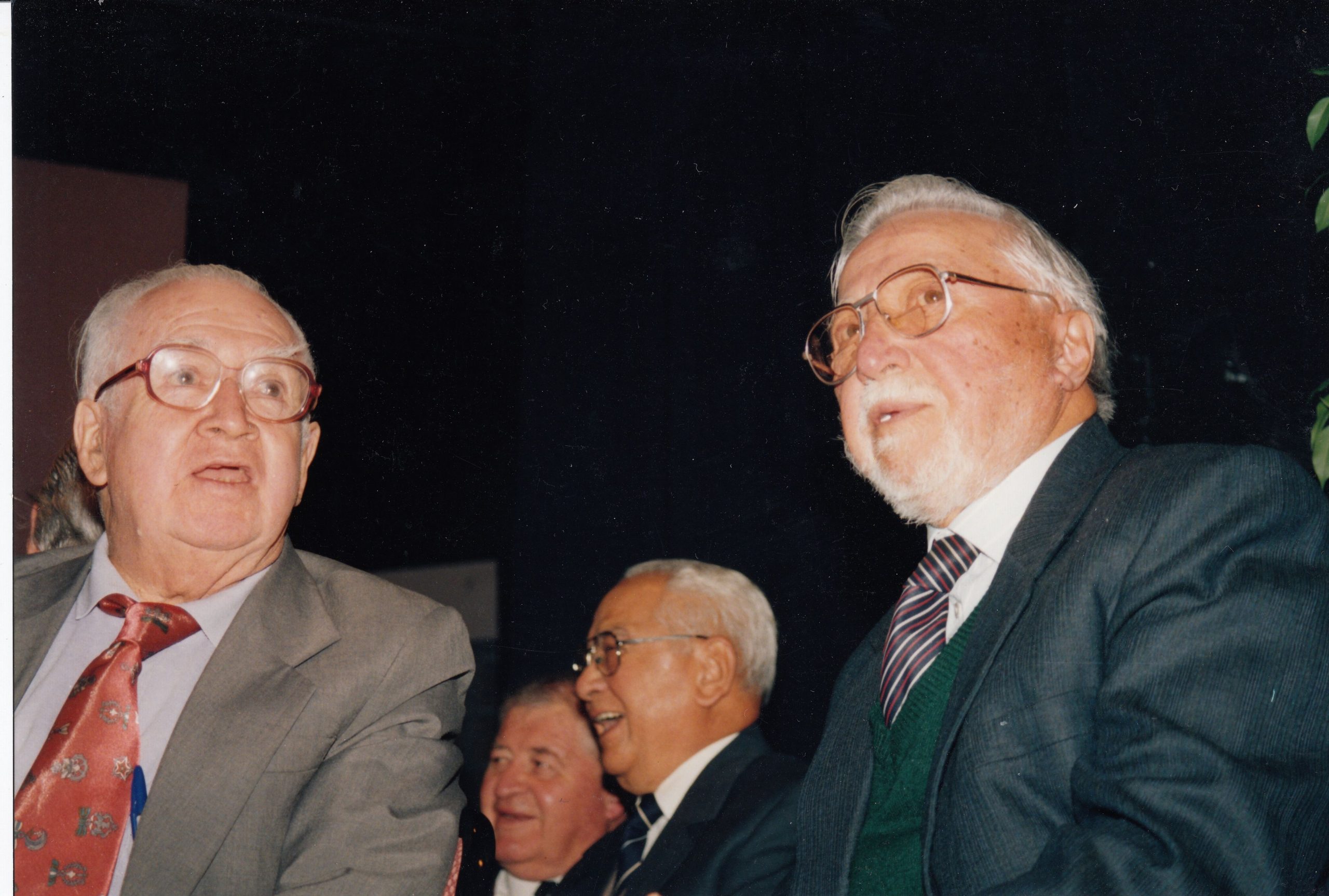 This image won the World Press Photo of the Year award in 1973. The jury valued the historical value of the photo, that immortalized Chilean leader, and captured the last moments of the democratically elected government. Later this image was called among 100 most influential photos in the history by the Times magazine.

The World Press Photo of the Year committee never awarded anonymous photographers before 1973. And the contest chairman Joop Swart remembered that John Morris, photo editor of the New York Times, asked him to submit this photo, stressing its historical importance. Another reason behind the jury decision was an intention to award a photo made not by US or EU photographers, which dominated the chart for decades.

Read more: ‘The Critic’: a story behind plus more photos of Weegee

A bloody execution during the Iranian Revolution, 1979 - Old Pictures

[…] went to the ‘unknown photographer,’ just like in the case of the Chilean photographer Orlando Lagos who captured ‘The last stand of the president Allende.’ The name of the photographer became known only in 2006. In 2007, Ramzi received 10 thousand dollars […]