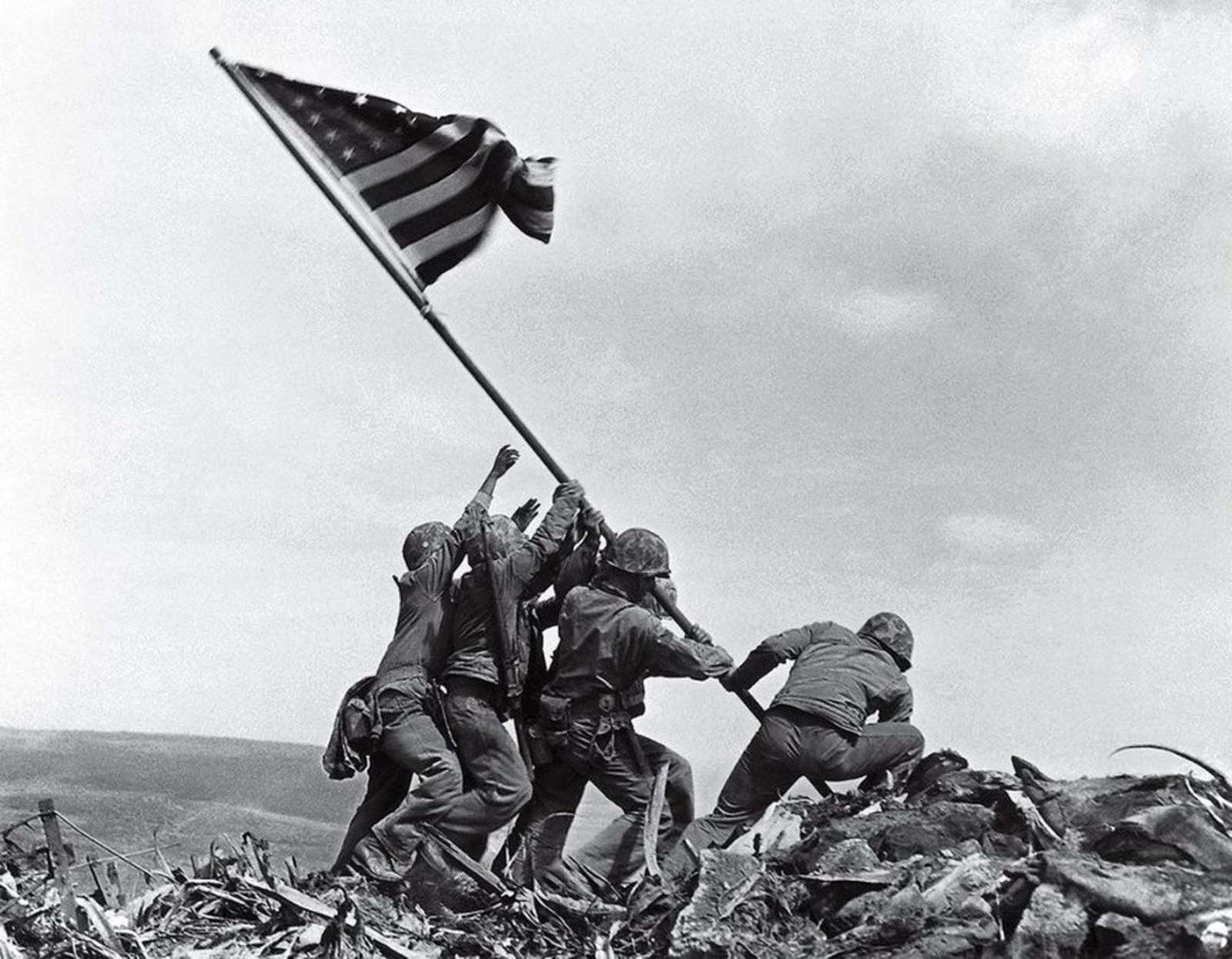 ‘The Raising Flag on Iwo Jima’ photo became a symbol of the US victory at the Pacific theater of WW2. And here’s why it deserved a place in the Top 100 most influential photos in history, according to Times magazine.

The distance between the US pacific coast and Japan affected the effectiveness of bombers and air attacks. The aircrafts often overloaded and broke during long-distance flights. Also, Japanese radars located them, and their anti-air forces were ready to counterattack.

Iwo Jima was located in the Pacific Ocean 1250 km south of Tokyo and 1300 km north of Guam. Its population counted around 1000 citizens and almost 4000 soldiers. Japan used this small volcanic island as a naval base.

Initially, the American army commanders did not consider Iwo Jima as a target. Still, a relatively quick capture of the Philippines led to a more extended break in battle than the Americans had expected before attacking Okinawa.

The US forces, consisting of two Marine divisions equipped with amphibious gear and another reserve division, under the command of General Holland Smith, an experienced and battle-tested general. The paratroopers, who landed after three days of artillery shellings, broke through the Japanese defenses on the first day of the operation. About 23 thousand island defenders, under the command of General Tadamiti Kuribayashi, resisted them desperately, with 23 tanks, 40 aircraft, ten patrol ships, and five submarines.

The bloody battle ended up with the defeat of Japanese forces. The surviving Japanese troops descended into underground bunkers and caves, from where they carried out sabotage for the next few years.

The most famous episode of the campaign is the raising of the American flag on the top of Mount Suribati on February 23, 1945, by five Marines and paramedics of the US Navy.

The moment of ‘Iwo Jima’ photo

This raising flag was captured by The Associated Press photojournalist Joe Rosenthal. The ‘Ivo Jima’ photo brought him the Pulitzer Prize and world fame. The image received its name “Flag Flight over Iwo Jima” and later became the most frequently reprinted photograph of all time.

Rosenthal captured the moment the second American flag when soldiers topped it over Suribati. The first set after the capture of the island at about 10:20 was too small and was poorly visible from the nearby beaches, where troops landed. Lieutenant Albert Theodore Tettle found a more massive flag (244 cm x 142 cm) on one ship.

According to the official version, this flag hit the ship from a warehouse in Pearl Harbor. Soldiers of the second platoon of the Easy company Michael Strank, Harlon Block, Franklin Susley, and Ira Hayes meanwhile made a telephone line to Suribati. The flag got to the top around noon. At the same time, Rosenthal went up there, accompanied by two Marine photographers. This group reached the top at a time when the Marines were tying the flag to an old Japanese water pipe.

Seeing that he was missing a unique moment, the photographer quickly picked up his camera and clicked without looking into the viewfinder. Half of the six soldiers died within the next month. A shell hit Strenk on March 1, Block was mortally wounded the same day. Susley was shot dead by a Japanese sniper on March 21. Only Harold Schultz, Hayes, and Harold Keller were lucky enough to return home.

Seeing the ‘Flag on Iwo Jima’ photo, US Secretary of the Navy James Forrestol said to General Smith: “Holland, raising this flag on Suribati means that the Marine Corps will exist for the next five hundred years.”

The photo hit the newspaper pages immediately. The flag scene got the sculpture forms in the U. S. Marine Corps War Memorial. The Post Office Department chose Flag Raising on Iwo Jima to honor the United States Marine Corps on a postage stamp. Also, the ‘Flag on Iwo Jima’ photo is considered as a propaganda equivalent to the ‘Flag over the Reichstag’ by Evgeniy Khaldei. The story of flag-raising mariners inspired Clint Eastwood to direct a historical themed movie, as well as at least two songs by Johnny Cash and Bob Dylan.

[…] the best-known WW2 Pacific battles photo belongs to Joe Rosenthal (Raising Flag on Iwo Jima), Eugene Smith photographed a different side of the war. He focused on capturing the emotions and […]

[…] we tend to pick WW2 photos that reflect important historical moments. Sometimes we pick images captured by famous photographers. But some of the bizarre WW2 photos […]

The Dangerous Summer of Ernest Hemingway in pictures (Spain, 1958)