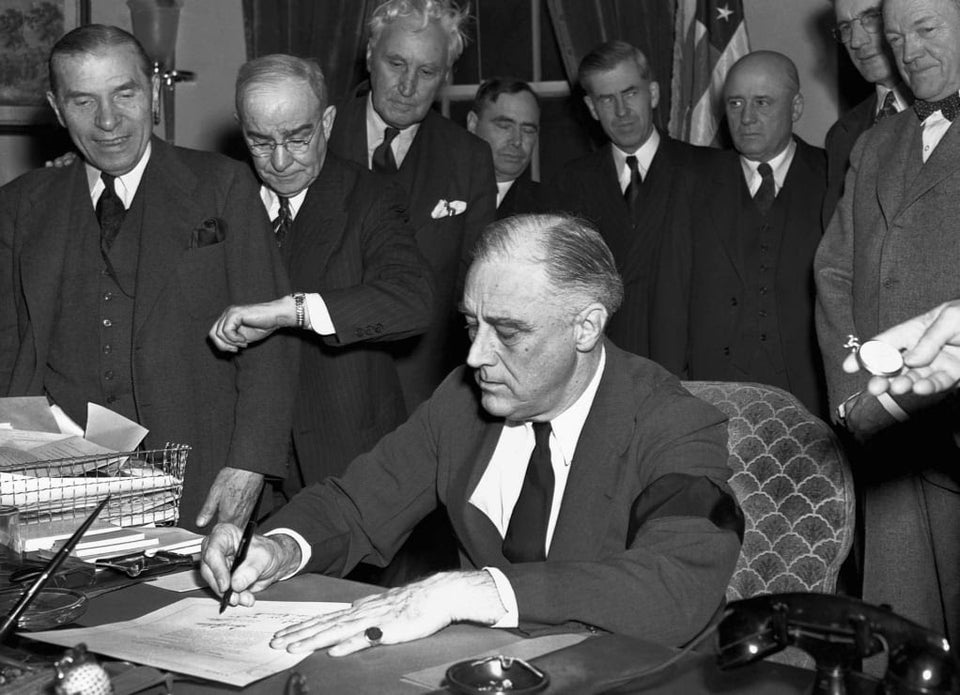 In this photo, the US President was signing the Declaration of War on Japan on December 8, 1941. In other words, Franklin D. Roosevelt declares war and marks the entry of the US into WW2.  President is wearing a black armband, mourning for the victims of the attack on Perl Harbor.

This photo hit the front page of the New York Times the very next day, and the headline was ‘Roosevelt declares war on Japan’.

Franklin D. Roosevelt was delaying the entrance of the US into WW2 as hard as he could. But a vicious Japanese attack on the US Navy base didn’t leave him any choice. Roosevelt also signed an executive order 9096 soon after the declaration of war on Japan. Around 13000 US citizens with Japanese origin relocated to concentration camps according to this document.

Japan didn’t have any historical chance to overcome the US in WW2. Even despite the fact that Japanese forces conducted several air attacks on the Californian cities, including Los Angeles. It was a matter of time when American forces will concentrate their effects in the Pacific theater. When all naval units gathered together, the US started slowly but surely pushing the Japanese away from their shores.

The US forces successfully resisted the Japanese air attacks and continued to help allies in Europe.

American marines successfully took all principal islands, including the strategic Saipan Island, in 1944.

Battles of Iwo Jima and Okinawa nocked the Japanese army down. The atomic attack on Hiroshima was the final blow.

The war with Japan ended on August 15, and Americans started to celebrate the V-J day.

But the formal treaty that ended WW2 officially was signed on September 2, 1945. Unfortunately, President Roosevelt didn’t live to see the end of WW2, as he passed away several months ago. Although, his vice, then-president Truman, did his best to put the final stop in the most horrible war ever.