Statue of Liberty: history in pictures and unknown facts 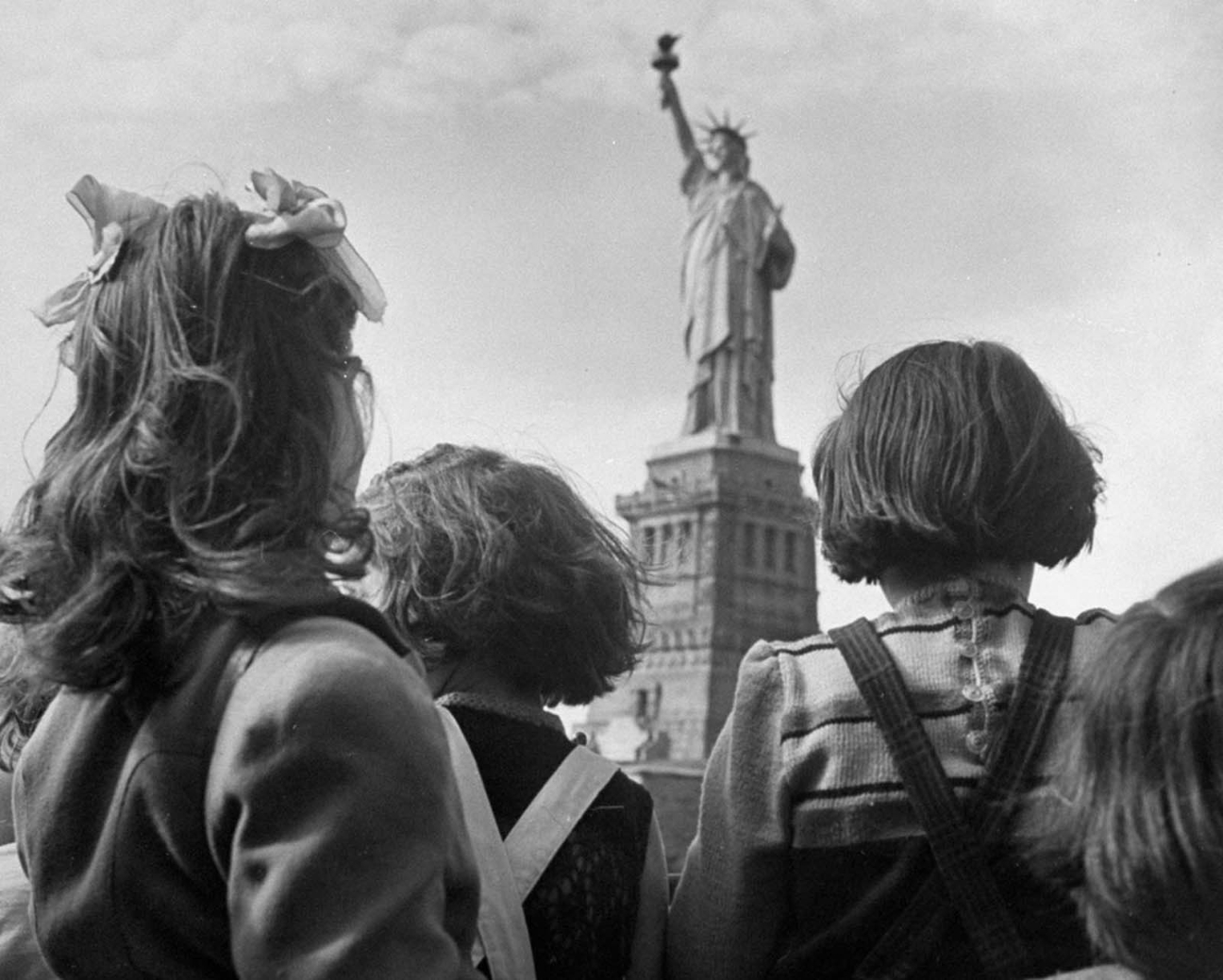 In 1946, refugee children gaze at the Statue of Liberty from the railing of a boat.

Statue of Liberty arrived in the US 115 years ago, in July 1885, and Oldpics honors this date with a set of historical pictures and unknown facts.

The history of the Lady of Freedom is fascinating and full of mind-blowing discoveries: including a genius vision of  Frédéric Auguste Bartholdi, here-n-there pessimists, construction show-stoppers, and a deadly dark storm during transportation to the New York harbor. 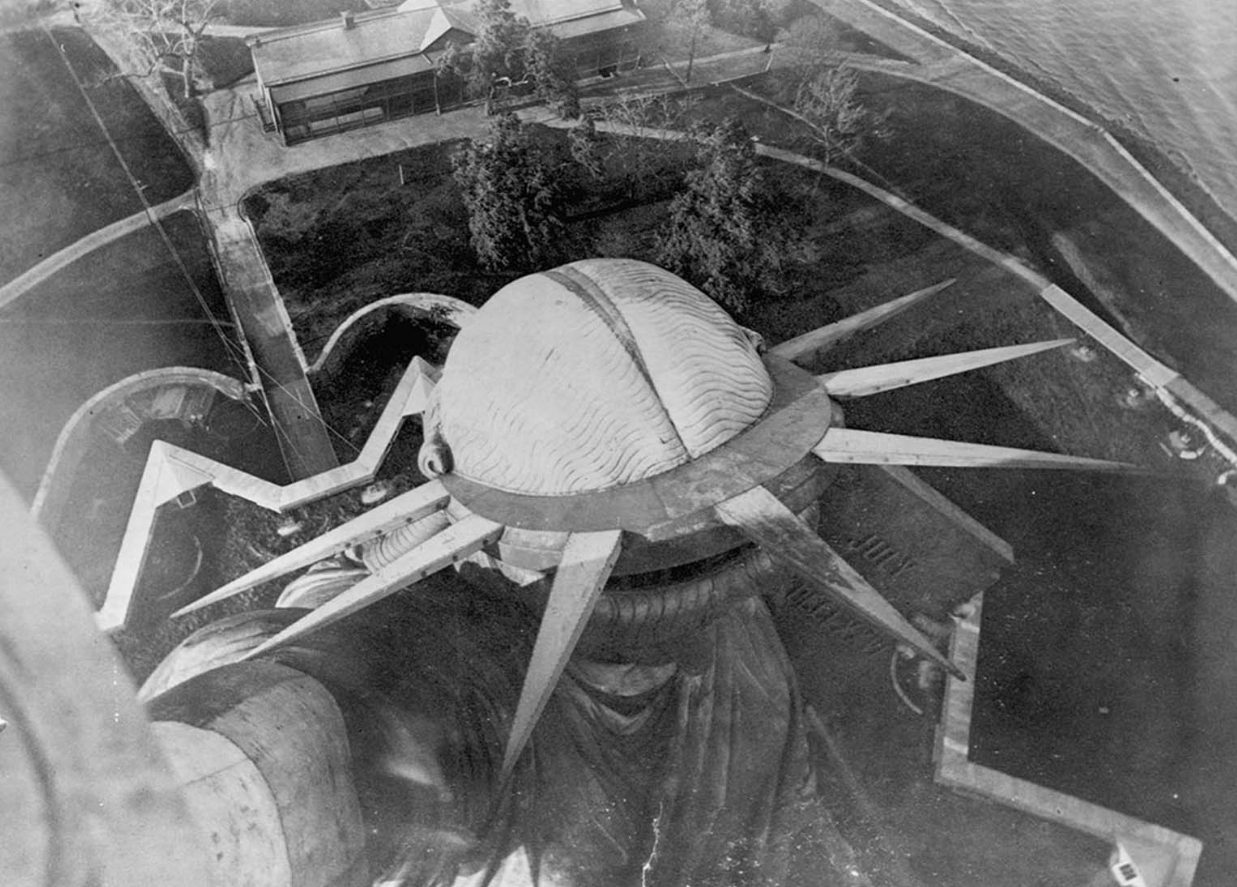 We used to think that Lady Freedom was a gift from the French government. In fact, french taxpayers didn’t put many dollars (well, franks) in the Statue’s creation. The history of the Lady started when Frédéric Auguste Bartholdi, a little-known sculptor, decided to honor a country that he never been to with a ‘magnificent lighthouse monument in the form of a woman.’ He traveled from ocean to ocean then, visiting cities and towns, and looking for his project support.

Bartholdi hoped to receive government fundings but failed. He followed up with his fundraising tricks, including workshop admission charges for visitors who wanted to watch the Statue’s construction, souvenirs sellings, and even a dead try to organize the national lottery. The French government didn’t permit him to run the sweepstakes, as it needed funds to recover from the war with Germany.

The fundraising history ended up with American money. Joseph Pulitzer, a media tycoon of the 19th century, saw the hand-drawn pictures of the Statue of Liberty and decided to help french sculptor to complete the project. He decided to publish the name of every person who gave even a penny to the foundation. This approach swiftly increased the distribution of Pulitzer’s newspaper when readers purchased a copy simply to see their names in the paper—an excellent selling tactic.

Frédéric-Auguste Bartholdi, the sculptor of the Statue of Liberty, explaining the construction process to a visitor. The visitor had paid an admission fee to see the workshop.

Bartholdi did not plan the initial design of Liberty for America. As a young man, he had toured Egypt and was fascinated by the ongoing project to dig a channel the Atlantic and Indian oceans. At Paris world’s fair of 1867, he had an audience with Khedive, the ruler of Egypt, and suggested building a statue as amazing as the pyramids or sphinxes. Bartholdi then designed a colossal woman holding up a lamp and wearing the loose-fitting dress of a fellah, a slave, to stand as a lighthouse at the entrance of the Suez Canal. When the Egyptian perspectives faded, Bartholdi took a chance on America to pitch his colossus. Workers in a workshop forging the copper for the construction of the Statue of Liberty in 1883.

Sculptor even recalled in his memoirs that he had a feeling like ‘Americans didn’t want the statue at all.’ All the Pulitzer demanded there were some pictures from the construction site of the Statue of Liberty. A pure investor’s approach.  Bartholdi could complete it much faster than 15 years, but he couldn’t because of fears that his work won’t be accepted. At some point, there were talkies about setting Philadelphia as a statue’s home, because Pulitzer couldn’t get a decent land in New York.

Frank Leslie’s Illustrated Newspaper for June 1885, showing the Statue of Liberty in Paris — plus her iron backbone

The first piece of the Statue of Liberty that reached the American land was its torch. It was a part of the world’s fair in Fairmount Park in 1876, Philadelphia; families paid admission walk inside the torch, take ‘almost a bird-eye view,’ as an advertising poster said. Visitors could buy Statue of Liberty pictures as souvenirs too. The torch had a vast visitors’ success, and Bartholdi raised enough funds to complete the head (Yep, another fact in the for not-so-free-French-gift history). Sculptor enjoyed the attractiveness of his project so much that he even considered giving it to the people of Philadelphia instead of New York. Pulitzer’s money convinced him back then.

A view looking up a spiral staircase in the statue’s interior.

The Liberty Statue project became well-known and quite popular in the US at the beginning of the 1880s. While Bartholdi was orchestrating the construction process in Paris, the Boston city council made its bid to invest in the project and change its location. The mayor of New York steamed and addressed an emotional message to the new yorkers in the article with a Statue of Liberty pictures in New York Post. It triggered a new wave of fundraising, and the Statue’s final destination became unquestionable. 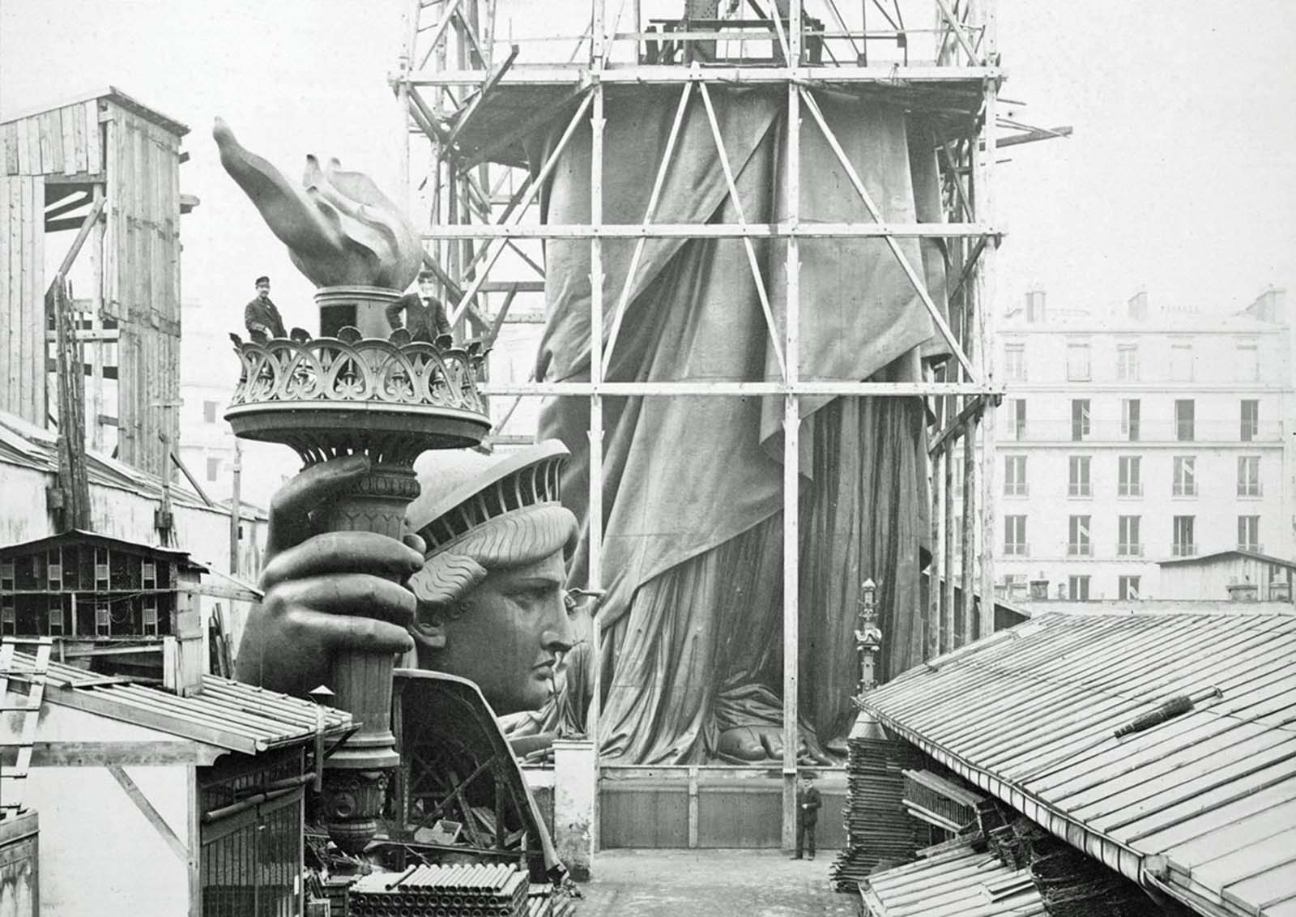 Statue of Liberty in Paris, the bottom half of the statue under scaffolding, with the head and torch at its feet, photographed in 1883.

Bartholdi thought that Statue of Liberty could become a part of Brooklyn’s Prospect Park or Central Park. The land in the area was expensive even in the 19th century, and the sculptor couldn’t even hope that the government will dedicate a whole island to it. The well-known Dakota apartment building could not look so magnificent when neighboring such a massive construction.

Many visitors of Statue of Liberty use lipstick to write their names or initials.

President Ulysses Grant agreed to the use of Bedloe Island for the Statue when he saw in a Statue of Liberty pictures its lighthouse design. He even guaranteed some federal fundings if it will help the ships’ navigation. However, the designers couldn’t install enough light to serve that goal, and Bartholdi was frustrated with that fact. Sailors also stressed the fact that Bedloe Island’s location is a poor choice for an actual lighthouse, as it is hardly seen from the sea.

Preparing the assemblage on Bedloe’s Island.

Bartholdi wanted his creation to shine even in the dark. He recommended the city council to spend some taxpayers’ bucks to gild her. After all, this idea seemed both ridiculous and costly and was declined.

The text of the poem entitled “The New Colossus,” by Emma Lazarus, mounted on the base of the Statue of Liberty. Inventor delt with sound a lot, and even represented his phonograph to the public in 1878. Edison had a brilliant marketing idea that he shared with reporters. It was a “large vinyl disc” installation inside of the Statue of Liberty that play records of speeches so laud that even Manhattaners will hear them. Fortunately, the city council simply ignored the inventor’s ideas and switched from sound experiments to electricity researches. 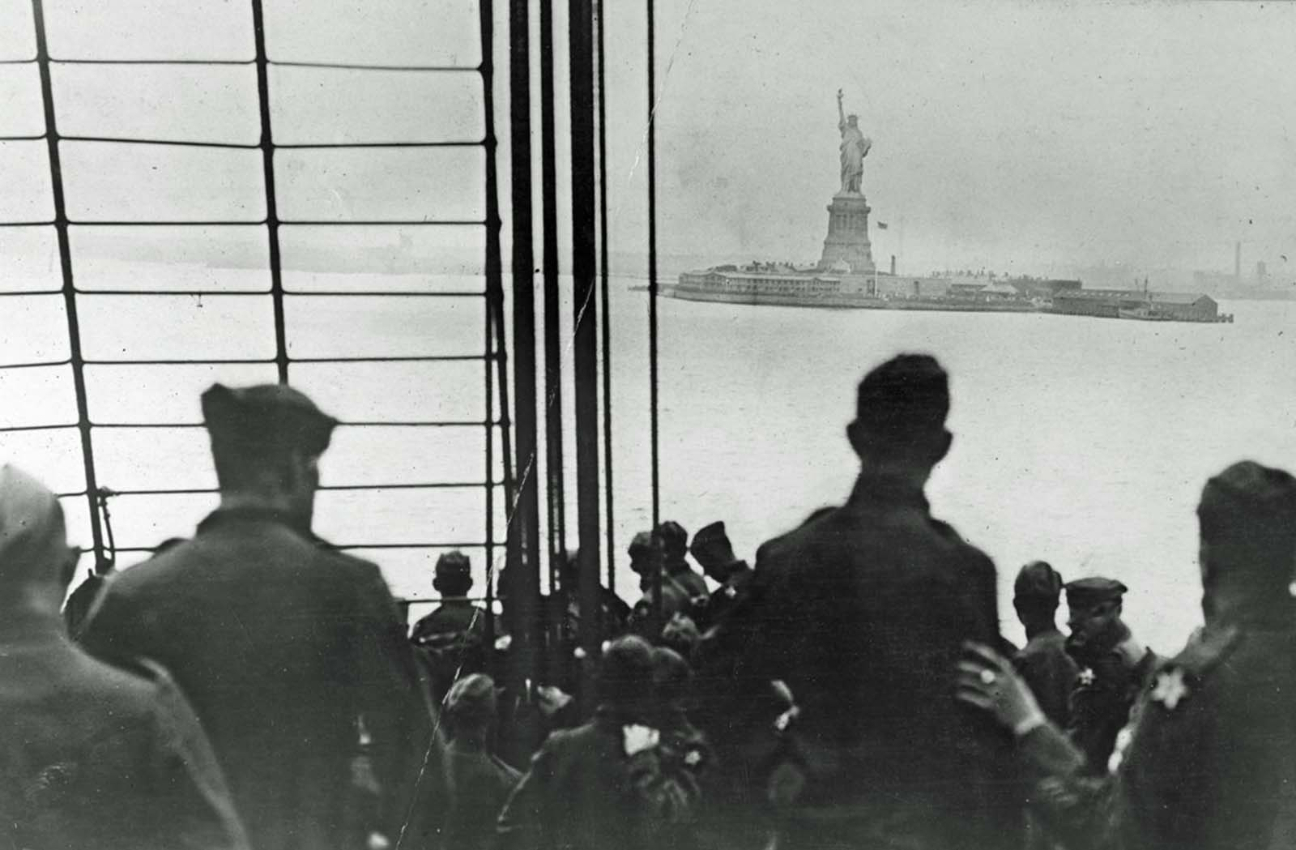 The irony of the situation was that a woman statue symbolized freedom in a country where women couldn’t vote. Suffragettes rented a ship to tour around the island during the statue opening. They raised the protest slogans, but no one paid any attention to their event. Statue will stay an attraction point for many civil rights movements in the future.

Some more pictures of the assembling of Statue here. 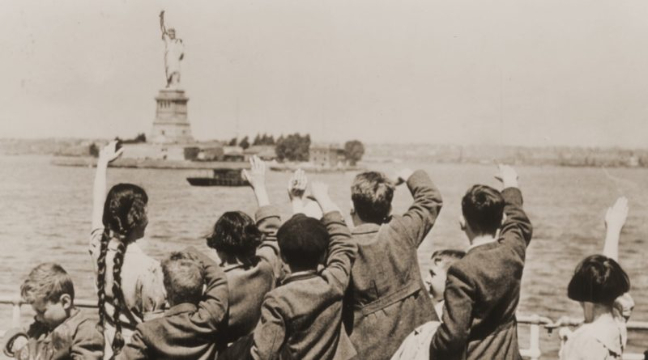 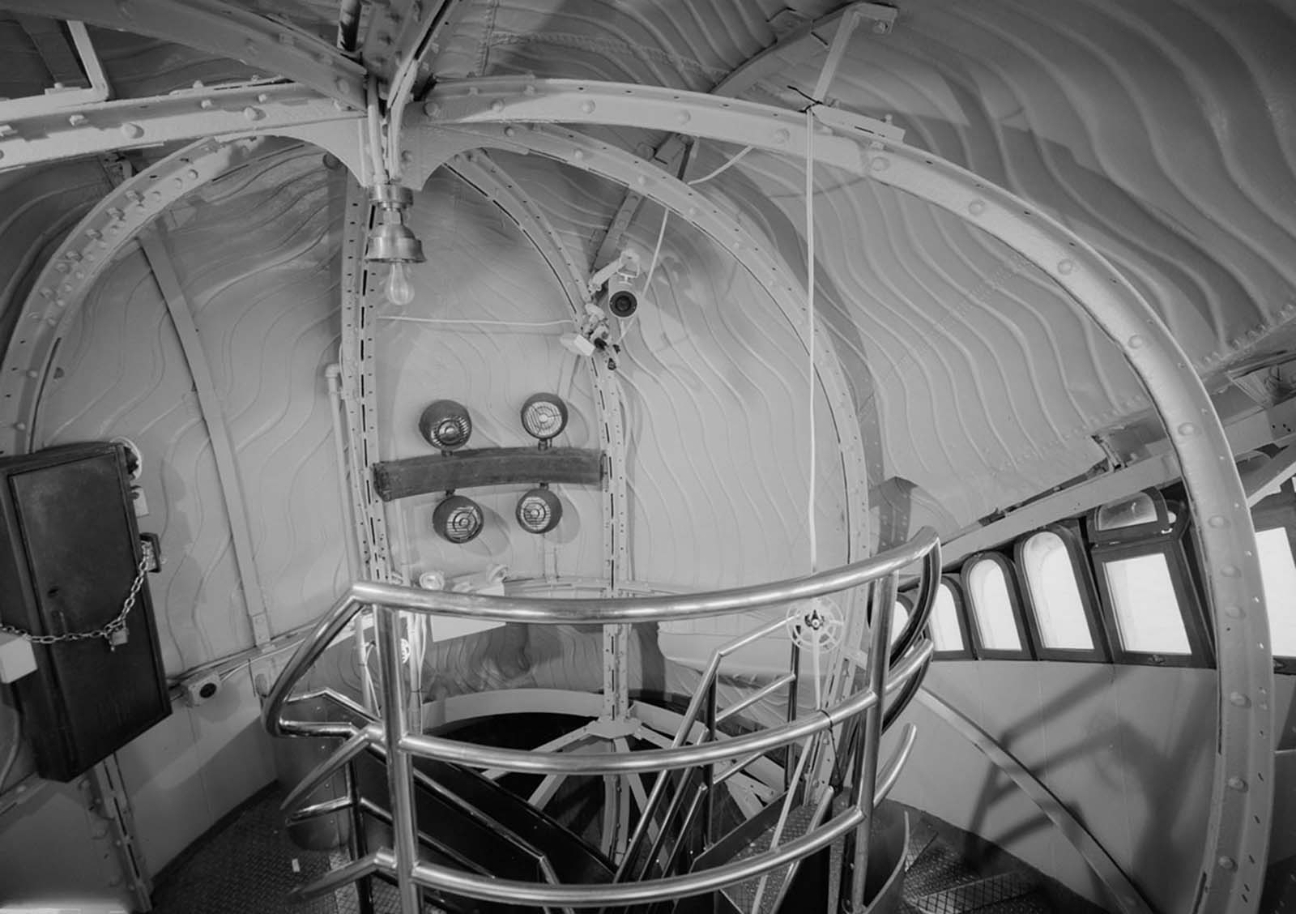 The Interior of the head and crown, looking northwest 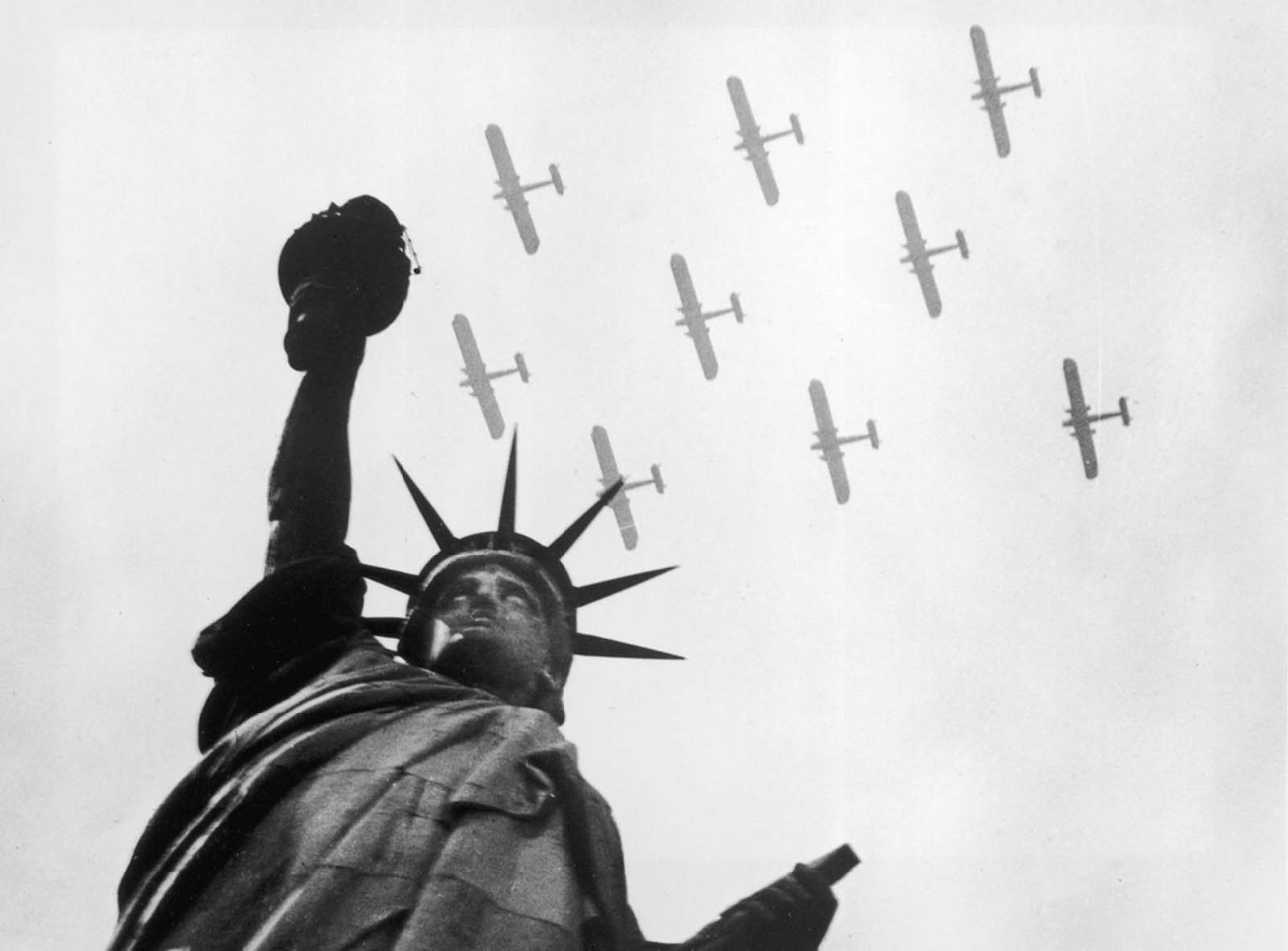 Fighters fly over the Statue of Liberty, circa 1935. View from Fort Wood, military fortifications at the late 1880s 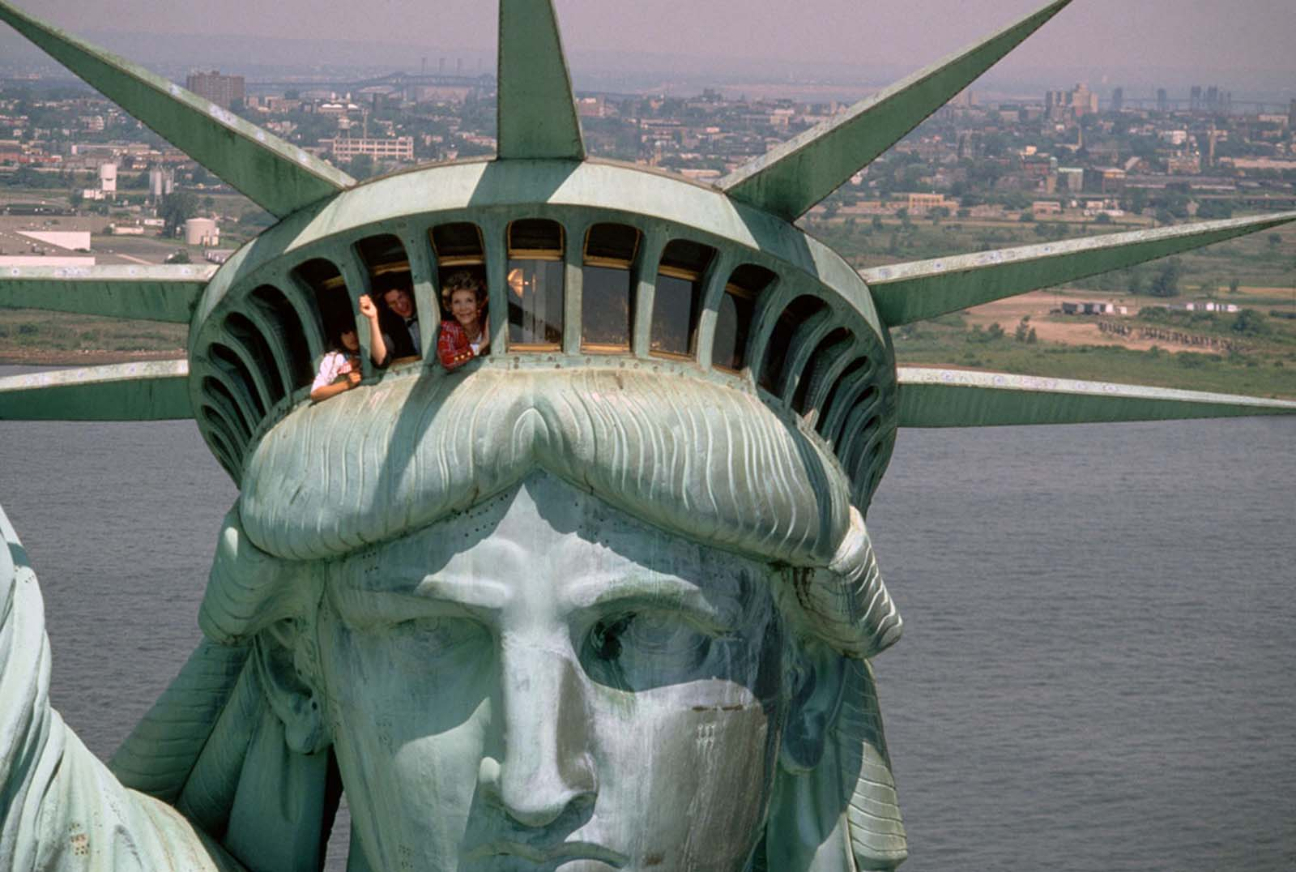 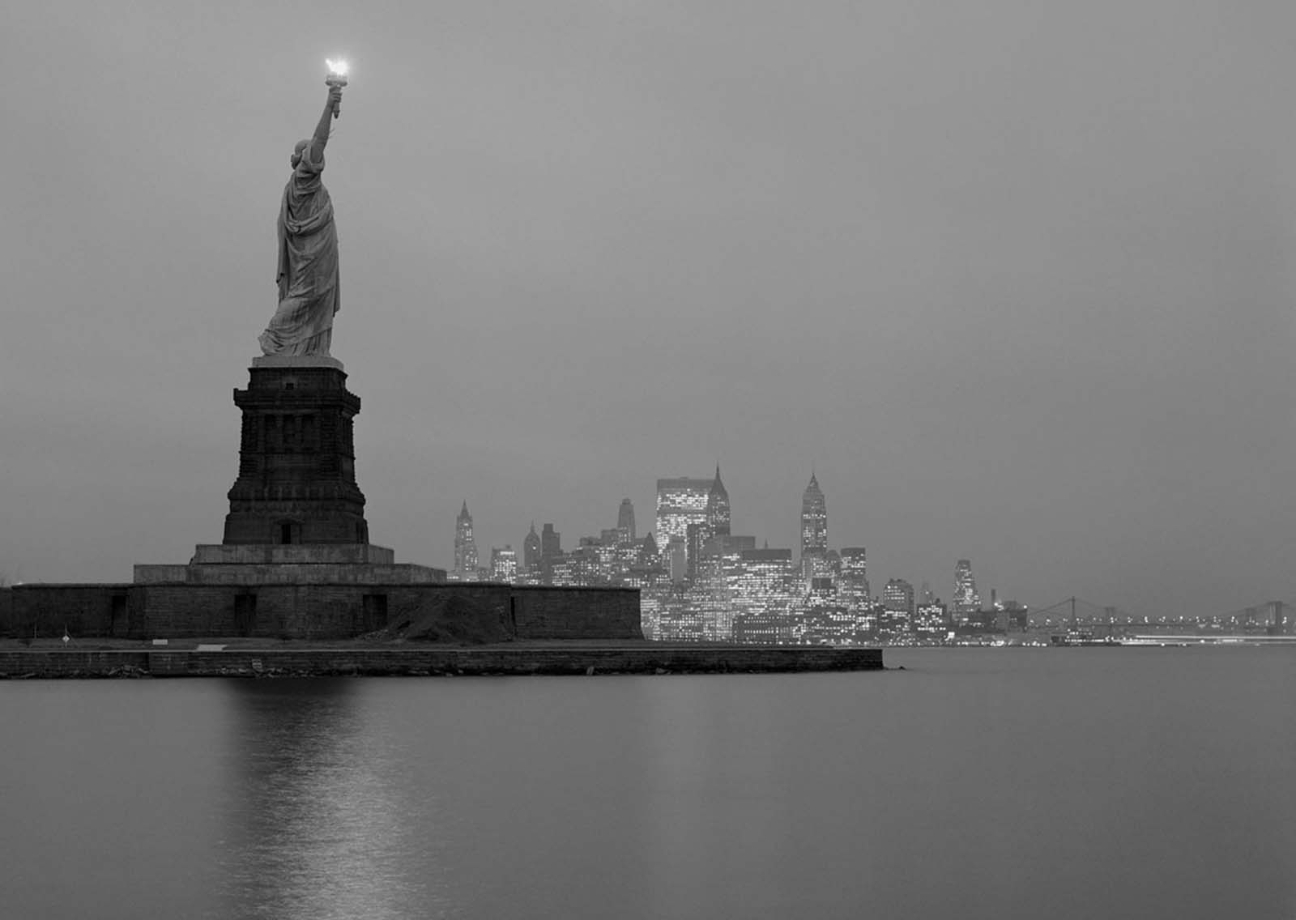 Lights were limited during the WW2

A view of the Statue of Liberty and Manhattan in the evening, photographed in 1961.