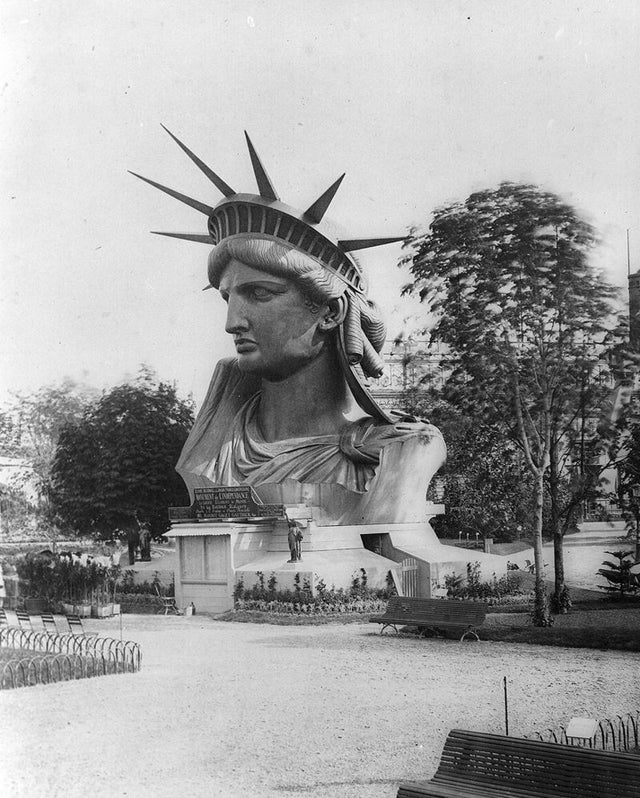 The Statue of Liberty will be fully assembled in 8 years

The head of the Statue of Liberty was shown at Paris’ World Fair in 1978. The exhibition was located at a Mars Field, but the statue’s head was placed in the garden of the Trocadéro palace. Despite the fact that this fair’s aim was the celebration of recovery after the lost Franko-Prussian war (1971), it suffered a lack of funding. Lots of constructions used low-cost materials and had a deteriorated look.

The statue was made of copper and was designed by French sculptor Frédéric Auguste Bartholdi and its metal framework was built by Gustave Eiffel, who’ll construct a world-famous tower a decade later.

Some parts of the statue were already delivered to the US by that moment. The torch-bearing arm was transported to Philadelphia two years earlier and was shown at the Centennial Exposition in 1876. After the exhibition, it was staying in Madison Square Park for six years, from 1876 to 1882.

Overall the head of the Statue of Liberty didn’t attract much attention during the fair. There was an opinion that it consumed too much copper that should be directed to the military needs.