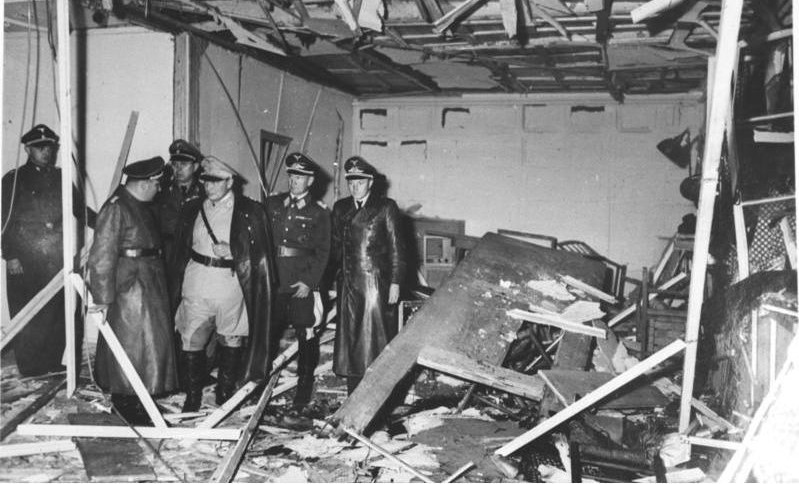 Hermann Goering and other German officials examine the destruction of Wolf’s Lair, one of the residencies of Hitler, after the failed July 20 assassination attempt.

Historians count at least forty attempts of Adolf Hitler assassination. But each time the assassination attempts failed, and Hitler survived. The reasons were different: the lack of planning of the lone conspirators, the caution of Hitler himself, and sometimes a bit of pure luck. The operation Valkyrie (July 20, 1944) was the boldest attempt to overthrow the Fuhrer. A massive wooden chair became a life-savior of the Fuhrer on that day. 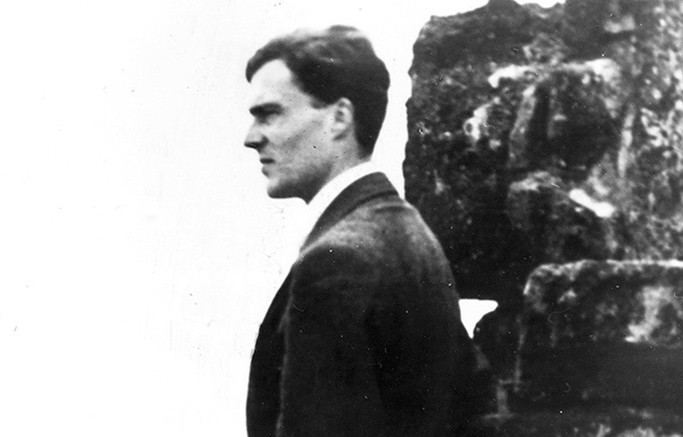 Klaus von Stauffenberg executed the best attempt at Hitler’s assassination. Only luck could save Fuhrer on that day.

The darkest clouds started to gather above Germany by the beginning of 1944. But as long as the Fuhrer kept power grip, there was no chance to end WW2. The conspirators who were planning an anti-Nazi coup decided to take advantage of this situation.

Overal the Valkyrie plan wasn’t about the assassination Hitler. It set the transfer of power between the heads of the districts during emergencies, like the enemy’s invasions or other disasters. Hitler approved the Valkyrie plan having no idea that is will become a basis for a few assassination attempts. General Henning von Treskov decided to use the plan for the coup purposes – to overthrow Hitler and seize power in the country. 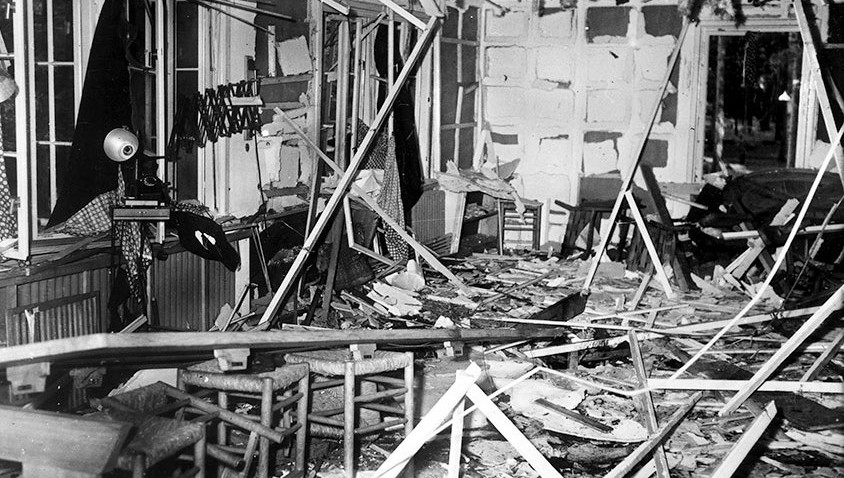 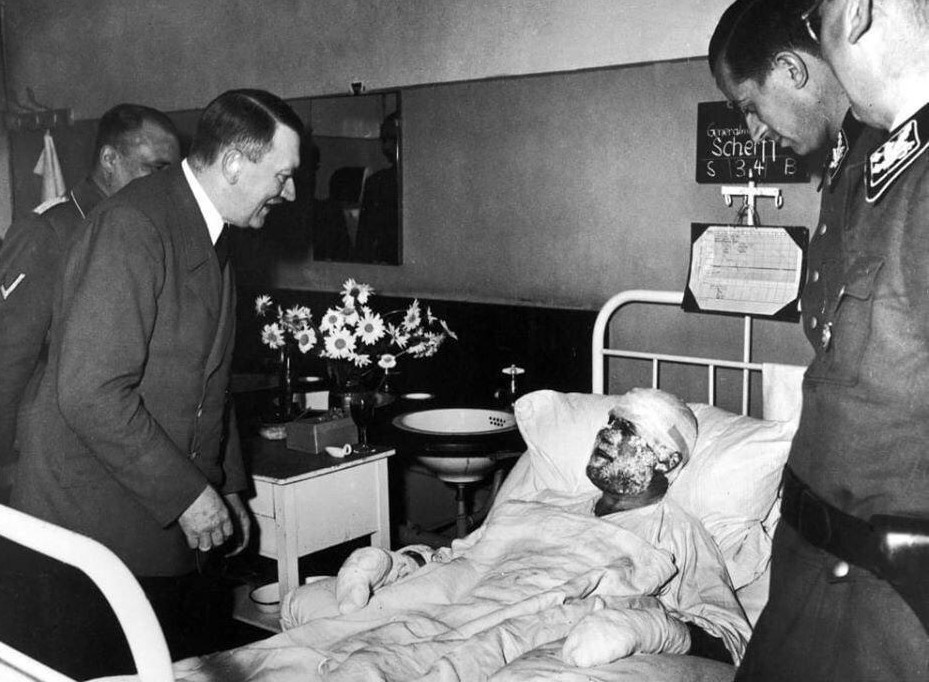 Adolf Hitler visits with officers wounded in the July 20, 1944, assassination attempt. The injured man in the bed is Walter Scherff, Hitler’s military historian 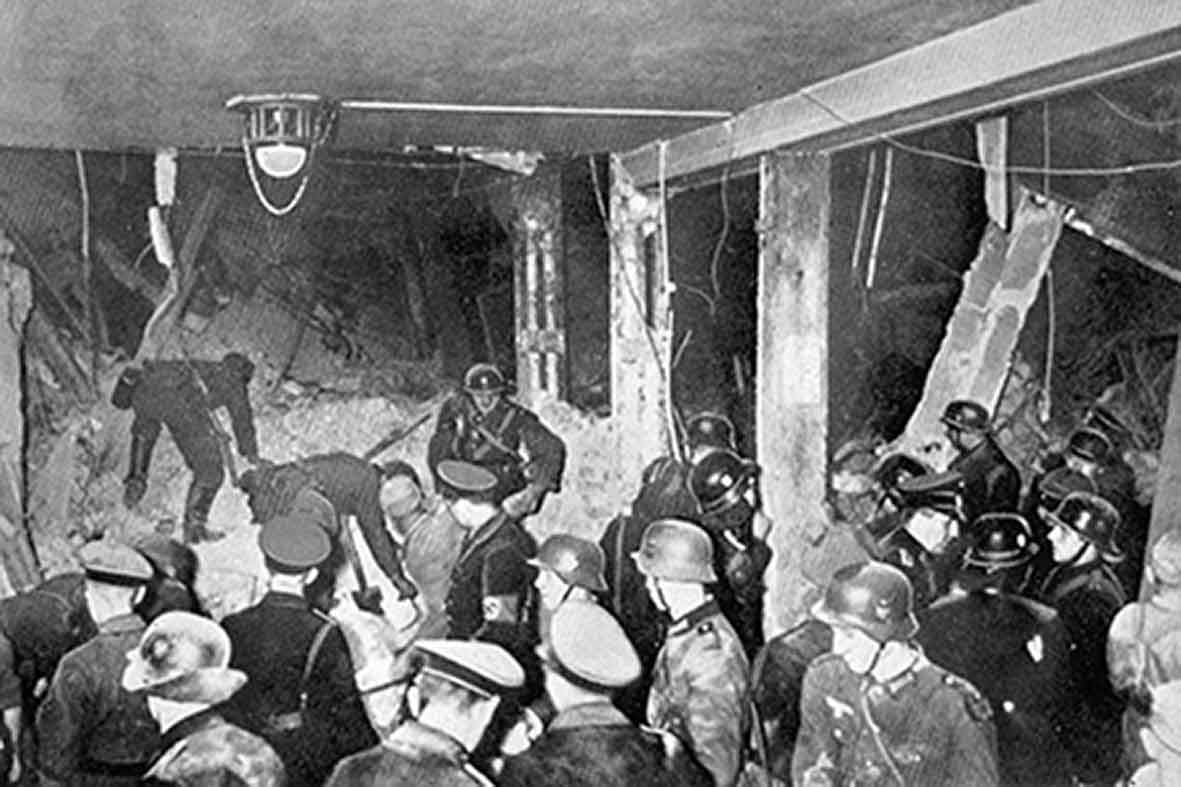 Soldiers are removing the ruins of the bar in Munich, after the failed Hitler assassination attempt.

Colonel Klaus von Stauffenberg had to execute the plan. This infamous militarian lost his right hand and eye during the war in North Africa. He barely avoided capture, unlike many of his brothers-in-arms. Stauffenberg had to kill Fuhrer on July 11 at a meeting in Berchtesgaden. But the Fuhrer did not come to the meeting, so the conspirators postponed the mission.

On July 20, Stauffenberg went to one of Hitler’s headquarters called “Wolf’s Lair”. The colonel had two briefcases with him: one with documents inside, the other – with explosives. Stauffenberg asked to take a seat next to Hitler, citing problems with his ears and placed a bomb a couple of meters from the Fuhrer. He left the room for ‘a telephone conversation,’ and activated the bomb.

A pure accident saved Hitler’s life on that day. After Stauffenberg left, Colonel Franz Brandt took a seat closer to Hitler and moved the briefcase on the other side of the massive pedestal. The explosion killed four people. However, the Fuehrer survived. On the same evening, Stauffenberg and Olbricht were shot. 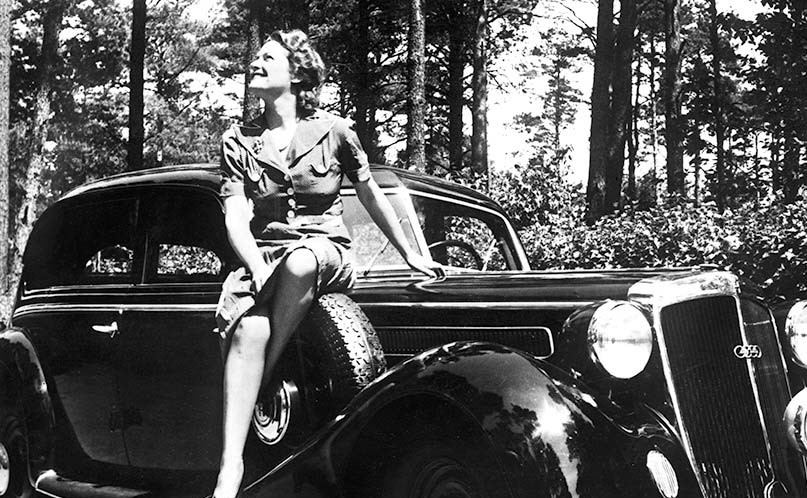 In 1920, actress Olga Chekhova decided to try her luck in Europe. She went to Germany, where she made her debut in the film “Castle Vogel”. Career went uphill. Years later, Chekhova earned the title of state actress of the Third Reich and became a star of German cinema. The rumor has it that Fuhrer himself was a massive fan of the Russian-born actress. Chekhova attended various events and communicated with Hitler’s beloved Eva Braun. Olga had direct access to Reichsmarschall Hermann Goering, Hitler’s henchman, and also a passionate art lover.

There’s a historian’s theory that Chekhova became an agent of the Soviet secret service before her trip to Germany. And she had to execute one assassination attempt plans, but Stalin vetoed the operation. The idea was to involve Polish Prince Radziwill, captured by Soviets in 1939. Polish aristocrat, along with Chekhova, had to cover the Soviet agent and provide him with direct access to Hitler. They planned to use a time-bomb as a weapon. But Stalin abandoned this idea, fearing that the Fuehrer’s successors would sign a peace treaty with Great Britain and the United States and use it against USSR. The Soviet leader was preparing to crush Germany with his offensive, with no idea that he may completely lose (including losing his son) the first stage of WW2. 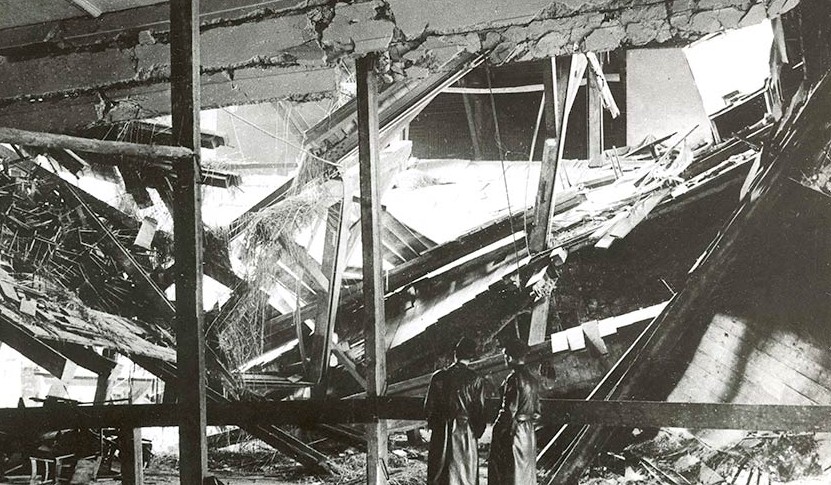 Assassination attempt on the anniversary of the Beer Putsch

However, the Soviets could even skip Chekhova’s plan if Georg Elserattempt succeeded with one of the boldest attempts to assassinate Hitler in November 1939. He recalled later: “I wanted to stop much greater bloodshed with my single bomb.”

On November 8, 1939, the anniversary of the Beer Hall Putsch, Hitler delivered his traditional speech in Munich. He was unaware that a time bomb was right behind the column, near his podium—the ticking of the clock lost in the crowd’s noise. Hitler’s speech timing stayed the same for many years. But this time, he hurried back to Berlin and completed speech a few minutes earlier.

The bomb exploded minutes after Hitler left the room. Seven were killed, about 60 people were injured. Police caught Elser, and Fuhrer surprisingly didn’t order to execute the conspirator. He spent the rest of his life in one of the concentration camps and didn’t live to see the end of WW2.

British MI-6 had about a dozen plans to murder Hitler. Some of them were very unusual: for example, hypnotizing Rudolf Hesse, captured by Great Britain, and making him kill a German dictator. There was an option with a deadly poison. The plan was to poison the fresh milk delivered daily to his residence, or the drinking water in the carriage.

But the secret services selected a much more common option –  a sniper. Brits knew Hitler’s travel routs perfectly and worked out a plan. According to it, a group of soldiers should parachute near the Führer’s residence in the vicinity of Berghof. They had to get as close as possible to the place where Hitler takes his morning promenades, and make an accurate shot.

By the end of 1944, MI-6 completed the preparation for the operation. But British military commanders quitted the plan. Germany had already suffered several significant defeats by that time. The physical elimination of the Fuhrer would not have the best effect on the flow of a previously successfully developing war. The CIA had a very similar operation in development. But President Roosevelt, following Churchill’s example, abandoned this idea.

No one knows how WW2 could end up if one of the Hitler assassination attempts succeeded. The Flag over Reichstag could never be set, and US soldiers returned home much earlier.