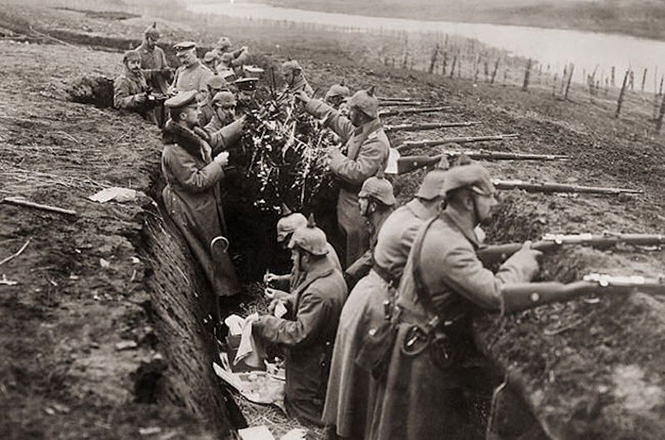 This fascinating story of the Christmas Truce of 1914 started on December 24, when the British watch noticed that the Germans were installing Christmas trees on their trenches’ parapet. Brits used to see machine guns there!

How the Christmas truce of 1914 became possible

Later reporters will call it a WWI Christmas truce of 1914. Of course, the decorations were primitive as they can be during wartime. The sparkling copper leading belts from shells decorated the Christmas trees. Garlands replaced bandages and telegraph tapes.

But the fact itself did not fit in with the atmosphere of the hopeless massacre that had prevailed here for the past few months! Very soon, Brits heard the German Christmas song, Stille Nacht. 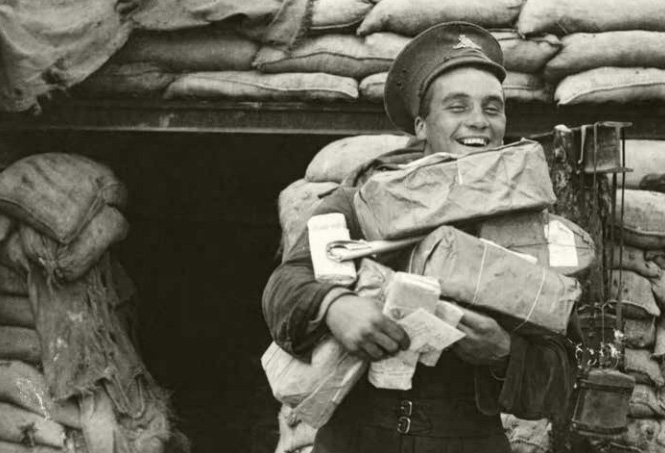 The British soldier is going to the no-man land to exchange Christmas gifts.

The shooter of the Royal Scottish Guards Graham Williams recalled that evening much later:

I was in the trench, watching the German line of defense. I was thinking about how different this holy night was from those that I had before … When suddenly lights appeared here and there near the German trenches. The light came from the candles lit on Christmas trees. The candles burned evenly and brightly in the calm and frosty evening air. Other sentries rushed to wake the sleeping people. “Look what is happening!”

And at that moment, the enemy began to chant Stille Nacht, Heilige Nacht. In fact, it was the first time I heard then this hymn, which was not so well known in our country. The Germans finished singing, and we thought we had to respond with something. And we sang the psalm First Nowell, and when we finished, there was friendly applause from the German side. They followed with another Christmas song, beloved by the Germans – O Tannenbaum. The Kaiser’s soldiers began to go out to the neutral zone with exclamations: “Merry Christmas, British!” They carried gifts in their hands instead of weapons. 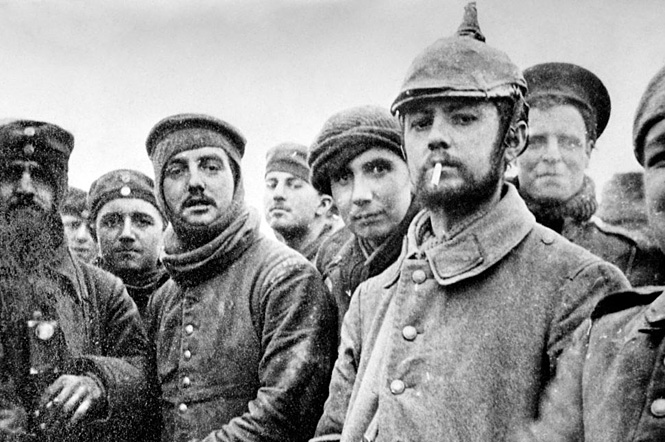 Here’s how the Germans and the British soldier began to go out to no man’s land to celebrate WWI Christmas truce of 1914. An English officer recalls:

I looked out of the trench and saw four German soldiers emerging from their trenches and heading in our direction. I ordered two of my men to meet the “guests”, but without weapons, since the Germans were not armed. But my guys were afraid to go, so I went alone. When the Germans approached the barbed wire, I saw that they were three privates. One of them said in English that they only want to wish us a Merry Christmas.

I asked what order the Germans received from the officers since they walked in our direction. They replied that there was no order, they went without permission. We exchanged cigarettes. When I returned to the position, the trenches were empty. I was surprised to find a crowd of 100-150 British and German soldiers. They laughed and celebrated. After a while, I noticed two German officers and through an interpreter told them that they should meet in a no man’s land and without weapons. One of the enemies admitted that he dreamed of an imminent end to the war, and I agreed with him.

Exchanging the Christmas gifts in the trenches

The soldiers of both armies received Christmas parcels from home. They could exchange small gifts: food, tobacco, various alcohol, even buttons, and hats were used. More than one hundred thousand Germans, British and French along the entire Western Front, stopped killing each other that night. Right between the lines of the trenches, the military priests performed the Christmas service.

Instead of organs of city cathedrals, soldiers sang. Former enemies together collected and buried the bodies of the killed, decomposed for months in funnels. They performed funeral services and prayers together.

In some front sectors, the truce lasted only one night, but in some places, the WWI Christmas truce of 1914 lasted a week until the New Year. It turned out that propaganda clichés are inexpensive: having started to communicate, the “Hans” and “Tommy” quickly realized that their opponents were not all the fiends from hell. Hatred disappeared, giving way to the friendliness of people in an equally bad situation. 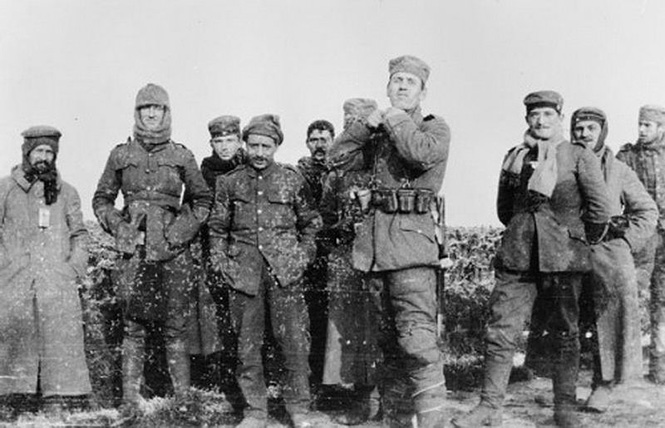 The Christmas of 1914 at Ypres

The football match during the Christmas truce

After the nightly Christmas services and the exchange of gifts, the miracles continued on the very day of Christmas. The soldiers came out of the trenches again and began to play football in the no-man land!

The bars of the gate were stakes in the ground. A stew can could serve as a ball. Each team could have an arbitrarily large number of players: no one really cared about the rules.

Ironically, the soldiers played football near Ypres’s town, which will give a name to the most deadly gas of WWI. The Yperite gas, or the Mustard gas, was dangerous because no WWI gas mask could stop it. 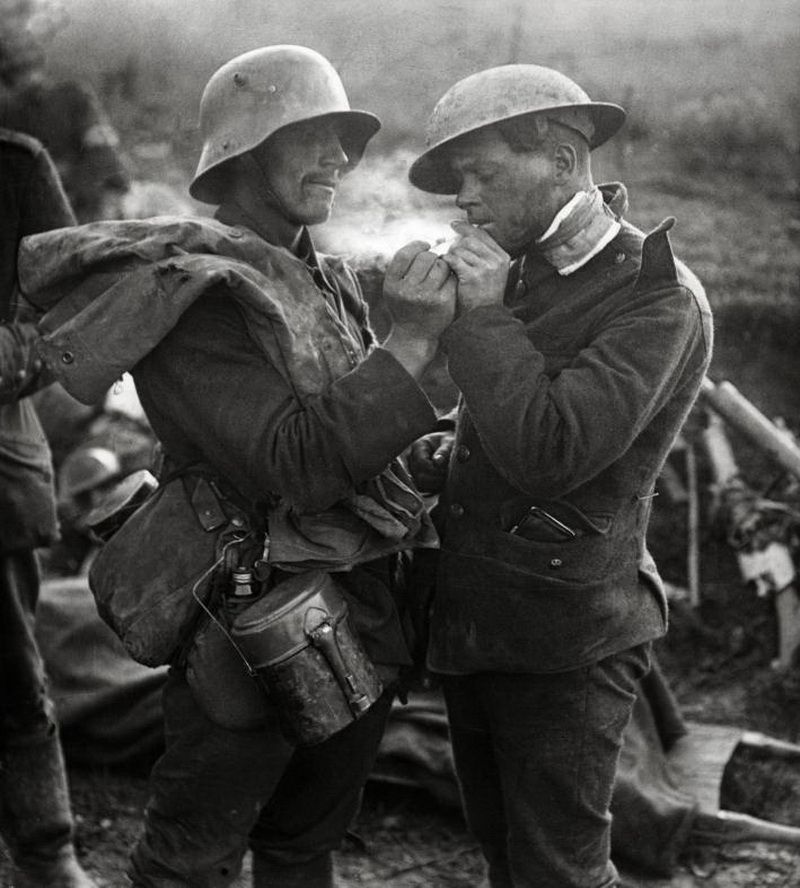 German and British soldier during the Truce

When information about the soldier’s willfulness reached the authorities, the reaction on the WWI Christmas truce of 1914 was immediate. The guilty were punished, and the fire began. The commander of the British II Corps, General Horatio Smith-Dorren, issued an order prohibiting any communication with the enemy. The commander of the Scottish Guards, Sir Ian Calhoun, was nearly shot for “aiding the enemy.” Only the personal intervention of King George V saved an officer. The King considered it unethical to shoot a knight and a relative of his prime minister.

By the way, some germans expressed dissatisfaction with the “outrageous” fact of fraternization with the enemy. The little known corporal from the 16th Bavarian Reserve Infantry Regiment was the one among them. Corporal’s name was Adolf Hitler. 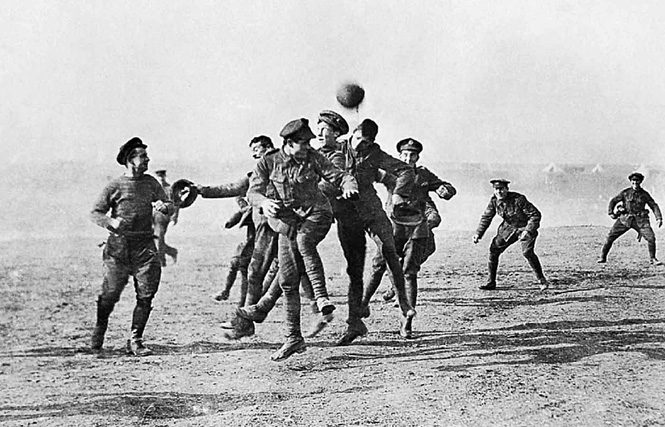 They tried to hide the Truce.

For almost a week, governments and military censorship managed to hide information about the unauthorized Christmas truce in 1914. But still, the truth soon surfaced: the New York Times reported on an unusual event, and in early January, the British Daily Mirror and Daily Sketch reprinted American photographs.

Governments tried to suppress any attempts to reconcile the soldiers on major Christian holidays in advance. Since 1915, the British artillerymen were ordered to increase the intensity of German positions on the eve of Easter and Christmas.

Commandant reshuffled units in different sectors of the front in order to prevent the establishment of any comradely ties with the Germans. There was no more such a Christmas truce as it was in 1914.

By Andrew Piper
3 Mins read
At first glance, Sting does not look like a person about whom you can tell something unusual or show some unseen photos….
Subscribe
0 Comments
Inline Feedbacks
View all comments
×
Stories