The war in Vietnam in pictures by Horst Faas Horst Faas was an outstanding war photographer. His brilliant photos won the Pulitzer award twice. Combat photography of the war in South Viet Nam during 1964 won the first prize. This publication at Oldpics focuses on Vietnamese series by Horst Faas.

The glory of the war cameramen

Horst Faas was a talented photographer. Not even just a talented, but, rather, a brilliant front-line correspondent. They’re not so many masters of the level of Horst Faas. We can compare his photography with war essays of Eugene Smith, Eddie Adams, Susan Meiselas.

The Vietnam photos made Horst Faas world-known. He worked at AP for decades, and its editor-in-chief Caitlyn Carroll said that Horst was perhaps his most irreplaceable employee and an excellent friend. 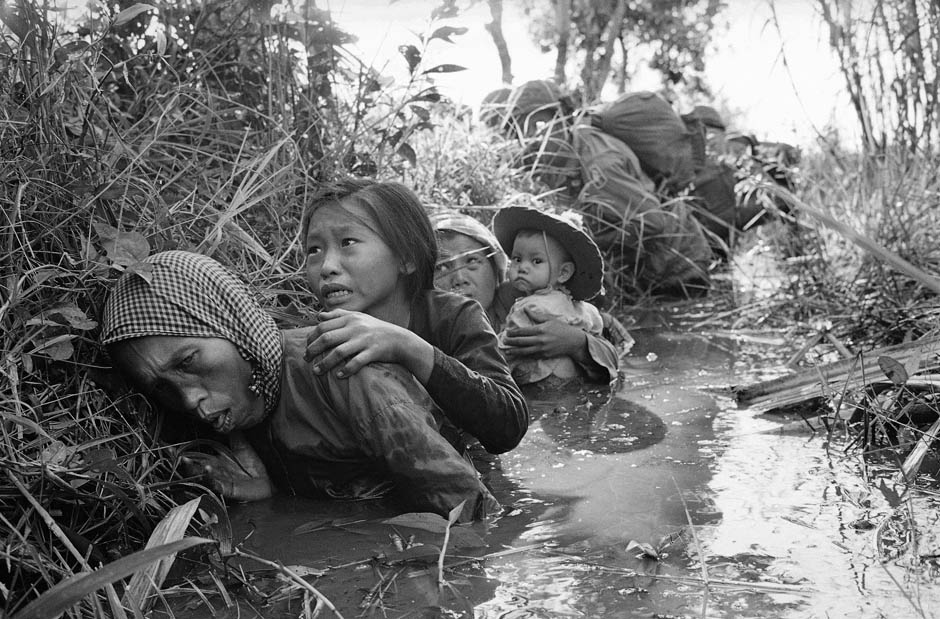 Women and children hiding in a ditch at Bao Trai, 20 miles west of Saigon, January 1, 1966

Faas didn’t try to show US soldiers as heroes all the time. And here’s why some officers didn’t like his photography. “This is a terrible photo,” complained one of the commanders. “I don’t want these pictures of my squad. Soldiers look sleepy and tired. They are in a fighting squad.”

Faas tried to explain that their exhaustion reflects their combat experience; six months later, this photograph became so popular that the same commander invited Faasa once more to take new pictures of his platoon. Faas risked all the way to take his photographs. And there’s at least one case when he was just lucky enough to survive. On December 6, 1967, he was wounded in the legs by an anti-tank grenade in Bu Dopa, South Vietnam. A young American doctor managed to stop the bleeding, recalling this event when meeting with Faas 20 years later. The doc said: “You were so gray and pale, I thought you’re finished.” 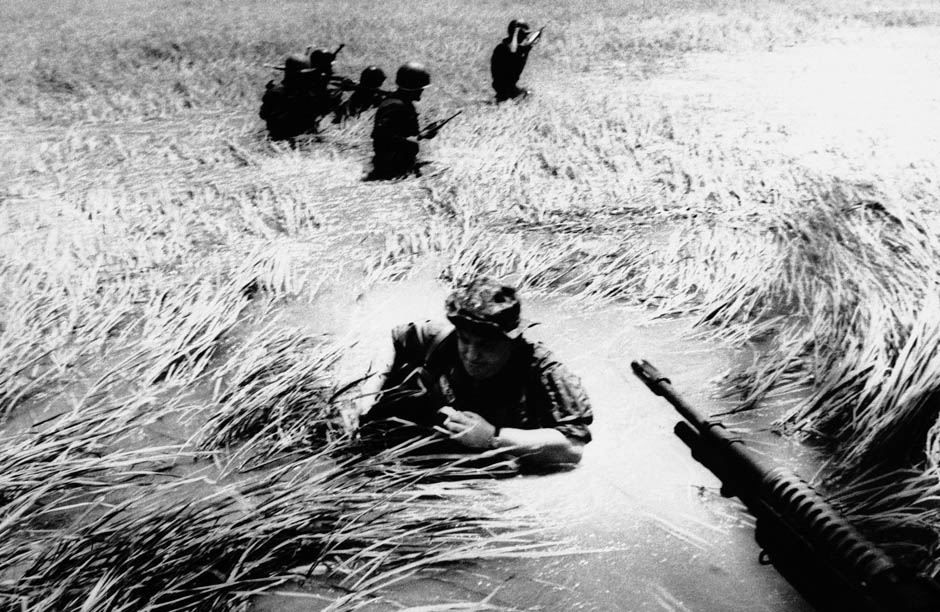 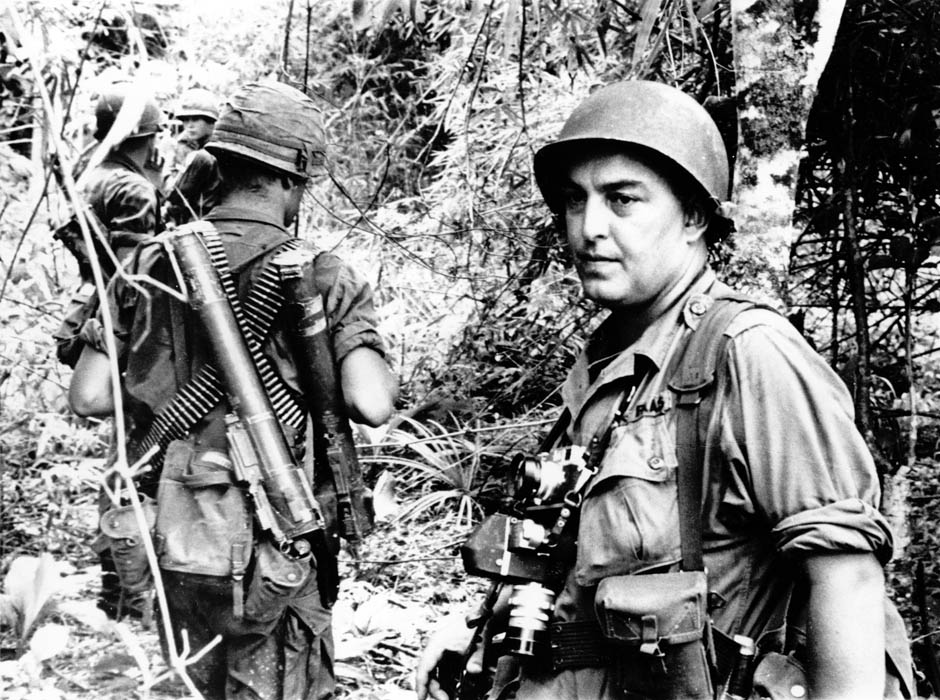 Horst Faas walking together with US marines, 1966

While recuperating, Faas was recruiting and training Vietnamese volunteer photographers.

Huynh Thanh My was among his most famous protégé. An actor switched to photography who died in 1965. Faas trained his younger brother Huynh Cong “Nick” Ut then. His image ‘Napalm girl’ won the Pulitzer Prize in 1972.

Horst Faas was a few yards behind his Associated Press colleague Eddie Adams in Saigon when he snapped his most famous picture. He captured the moment when a Vietnamese police officer executed a suspected Viet Cong officer on the street. This image is among the Top 100 most influential photos in history, according to Time magazine.

When the Vietnam War ended, Horst Faas wanted to leave his horrible memories in the past. He returned there only once, in 1978, and subsequently as a tourist. He said that his mission was “to capture the suffering, emotion, and sacrifice of both the Americans and the Vietnamese people.” US Marines flee from the crash site of a CH-46 helicopter shot down near the demilitarized zone between North and South Vietnam on July 15, 1966. Wounded American soldiers on a battlefield in Vietnam on April 2, 1967. 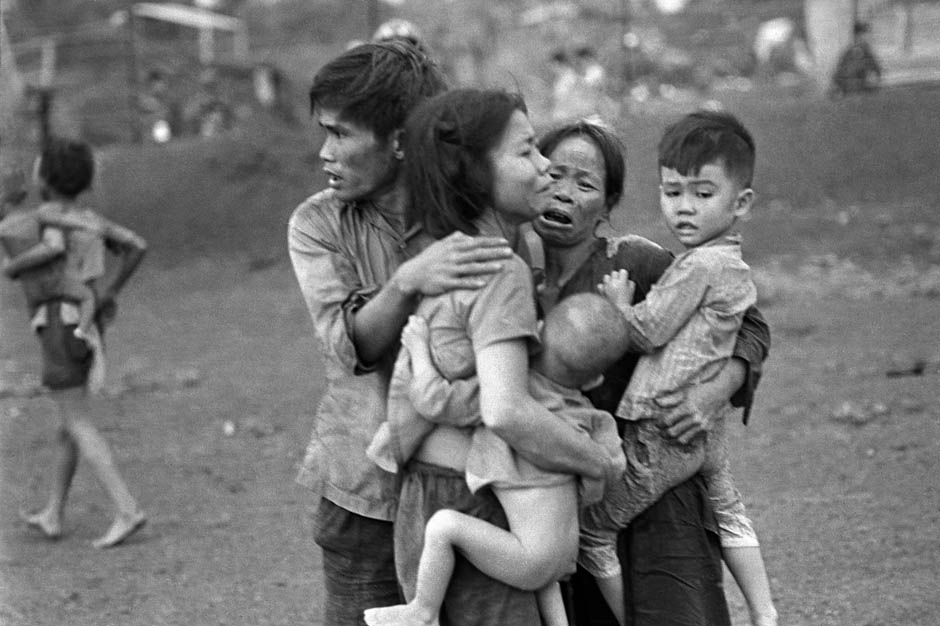 Survivors of two days of heavy fighting in Dong Huo, civilians gather after an attack by government forces, June 1965 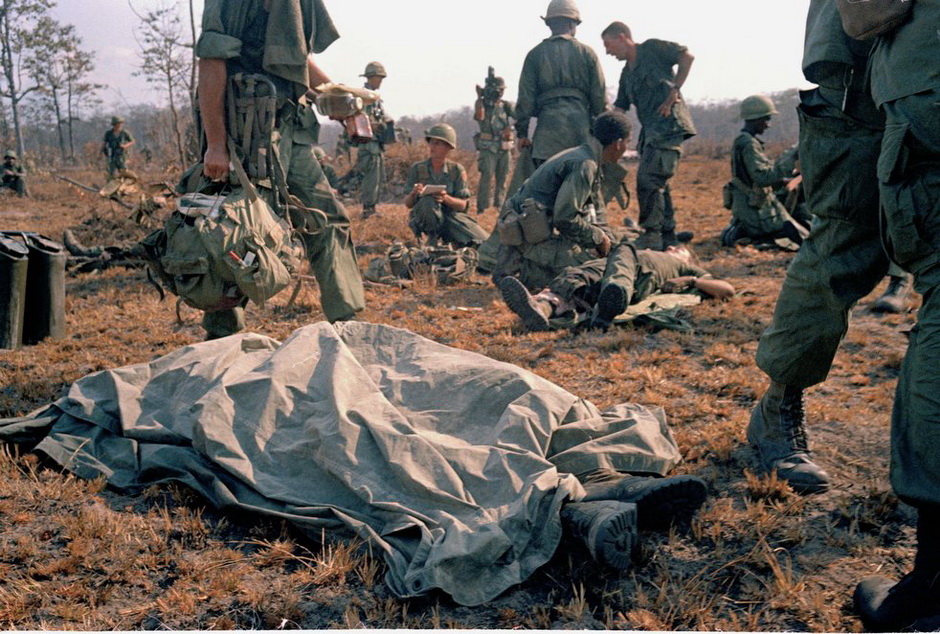 The body of an American soldier on the battlefield in Vietnam, April 2, 1967. Landing light from medical evacuation helicopter cuts through smoke of battle for Bu Dop, South Vietnam, silhouetting U.S. troops moving the most seriously wounded to the landing Zone on November 30, 1967. 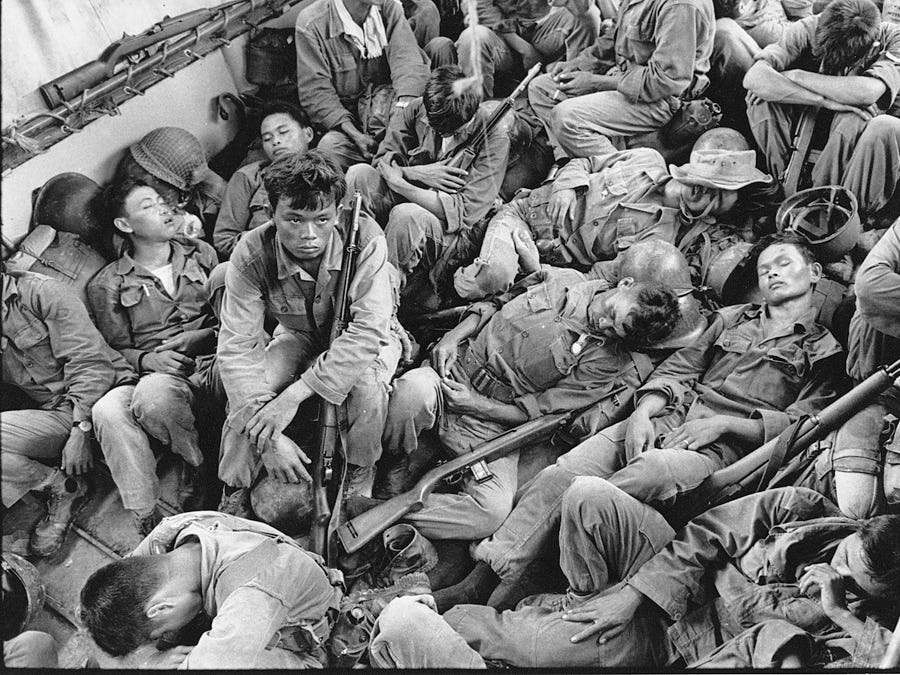 South Vietnamese government troops from the 2nd Battalion of the 36th Infantry sleep in a U.S. Navy troop carrier on their way back to the Provincial capital of Ca Mau, Vietnam. South Vietnamese troops, joined by US advisers, rest after a cold, wet, and tense night of waiting in the dense jungle around the town of Binh Gia, 60 km from Saigon, Vietnam, in January 1965. Vietnamese soldiers had to wear the face mask while passing through the road covered with bodies. Children drive home from school gazing at the bodies Viet Cong soldiers and their commander in the village of An Ninh in Vietnam’s Hau Nghia province on May 8, 1972. Artillery squads of the new South Vietnamese 25th division line up for a parade in front of 105 and 155 Howitzers in the coastal town of Quang Nai, South Vietnam, a Viet Cong stronghold, on August 15, 1962. 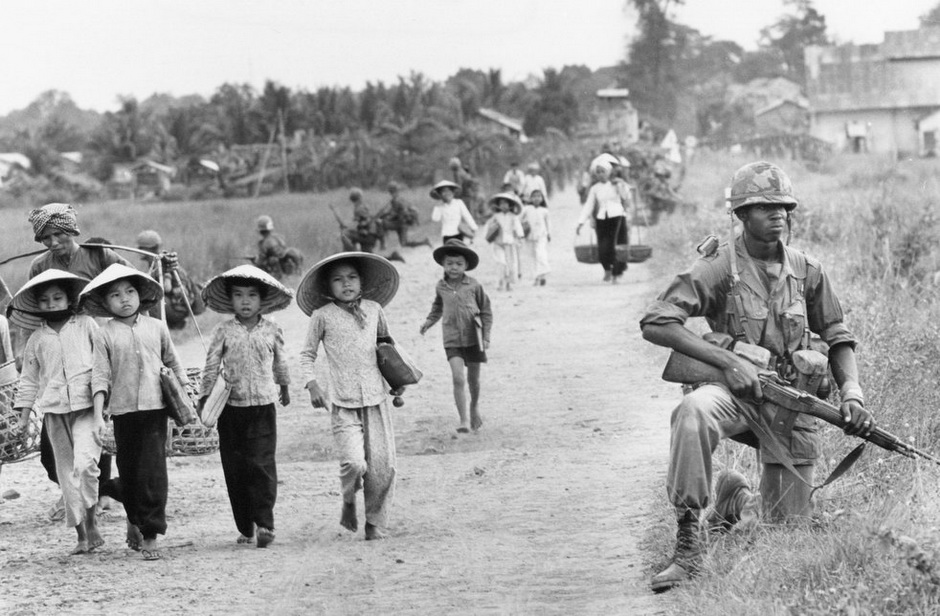 A wounded Vietnamese ranger is ready with his weapon, during the battle in Dong Xoai on June 11, 1965. 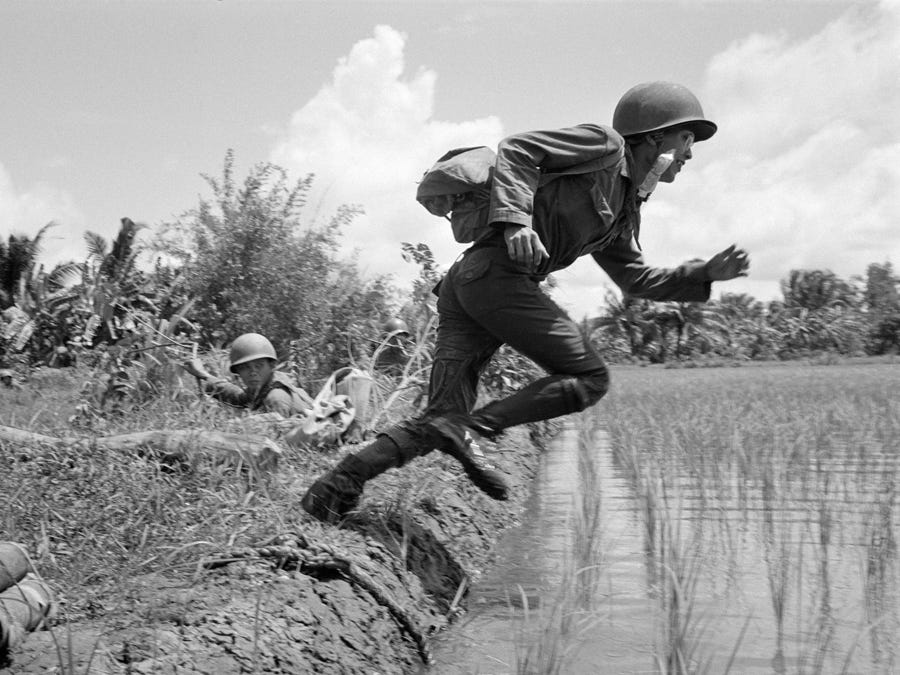 A Vietnamese doctor leaps from a secure position behind a rice paddy dike. Viet Cong snipers were covering the area with fire, August 8, 1966. A South Vietnamese woman cries over the body of her spouse. He was among 47 others in a mass grave near Hue, Vietnam. A South Vietnamese soldier hits a farmer with a dagger for giving false information to government forces about the movement of Viet Cong guerrillas in a village west of Saigon, Vietnam on January 9, 1964. 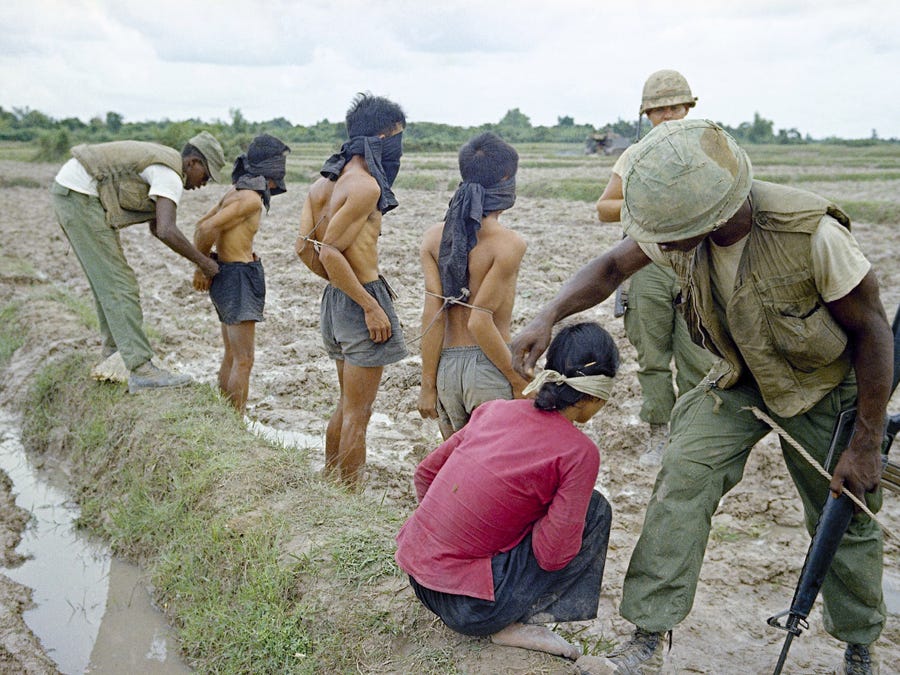 A battalion is inspecting the Trung Jap, northwest of Saigon. They’ve got information on Vietcong forces in the area. A Vietcong bride was arrested, blindfolded, and bound when troopers saw her hiding a bag with a bomb.