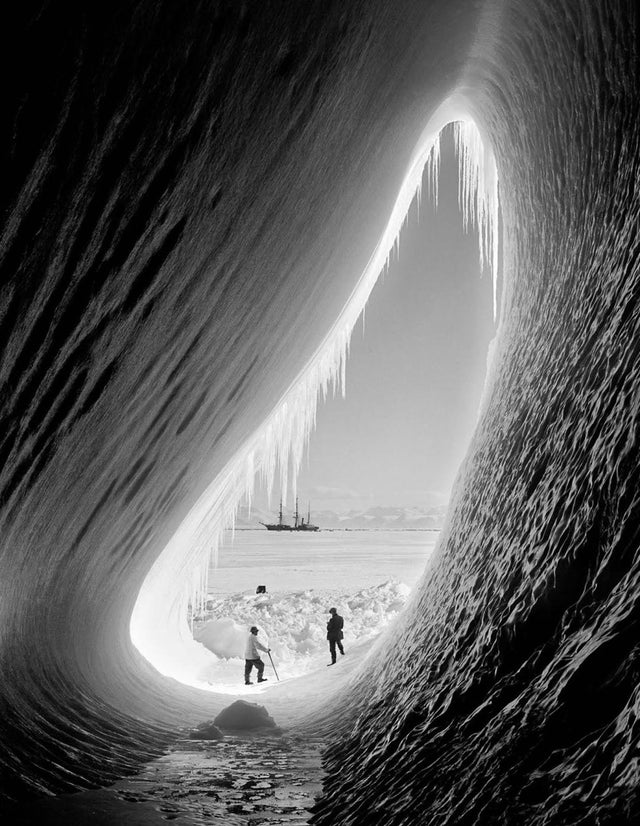 Scientists’ names are  Thomas Griffith Taylor and Charles Wight, and this was photo was taken in January 191.  Taylor was a senior geologist on the Terra Nova ship during its Antarctic expedition. He was hired by the captain R.F.Scott, to research the effects of antarctic on Australia weather.

Interestingly, Scott acquired a Terra Nova for 12500 pounds specifically for this Antarctic expedition. Polar explorations were financed decently those years and it was a common thing to receive a grant from Royal Geographical Society and start a dangerous adventure. Those expeditions ended badly in many cases for both crew and a ship itself. Explorers tried to go as close to the pole as possible, putting themselves into high risk due to the unsuitability of that time vessels to ice breaking.

To avoid this grim fate R.F.Scott fortified Terra Nova body with a 7-feet oak layer, transforming it into a ‘perfect ice-breaking vessel of its time’.

Later that year, Taylor was awarded the King’s Polar Medal and made a fellow of the Royal Geographical Society of London.

By Andrew Piper
4 Mins read
This fascinating story of the Christmas Truce of 1914 started on December 24, when the British watch noticed that the Germans were…
Photo of a day

By Andrew Piper
2 Mins read
Ironically, these nine kings will be at war (WWI) less than five years after this photo was taken. Nonetheless, there was no…
Stories

By Andrew Piper
1 Mins read
This decrepit german WWI submarine appeared on the surface 92 years after the last dive. We guess that if this U-boat UB122…
Subscribe
0 Comments
Inline Feedbacks
View all comments