The political career of Theodore Roosevelt in pictures 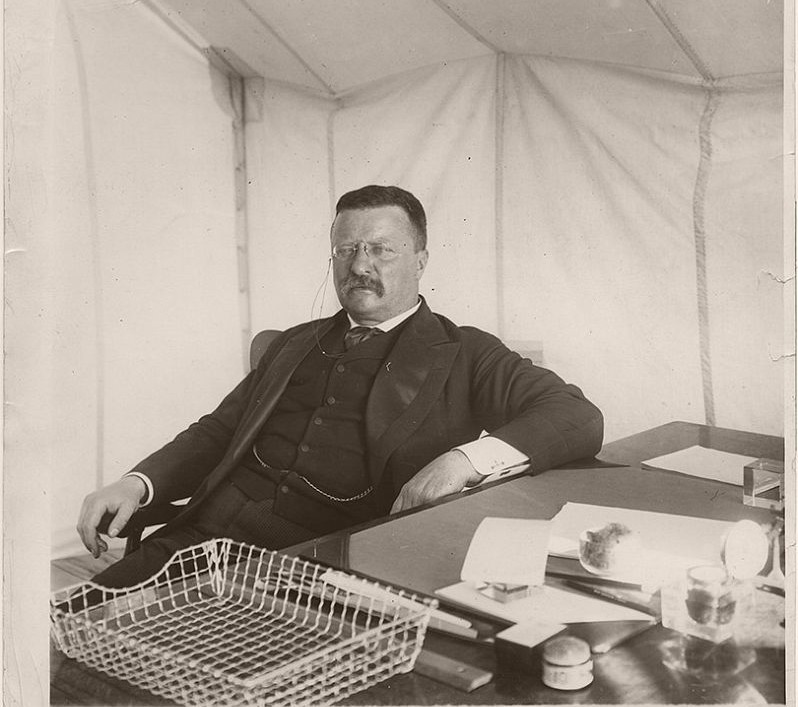 Historical pictures of President Theodore Roosevelt: taking a rest after delivering his speech at the Alamo in San Antonio, Texas.

Many of these pictures still keep energetic of the presidency of Theodore Roosevelt, one of the most popular leaders of the US. Upon election, he was the youngest President of the US, and he did his best to make his country great. New York-born Roosevelt became the first historical symbol of the US global power, just like the Statue of Liberty associated with US freedom.

Roosevelt started his bright political career in 1880, with his first historical essay, “War at Sea in 1812”. He entered the New York State Legislature committee and then was a chief of the police of New York City. In 1897 Theodore Roosevelt became Deputy Secretary of the Navy. He participated in the war between America and Spain and received a  Colonel rank. 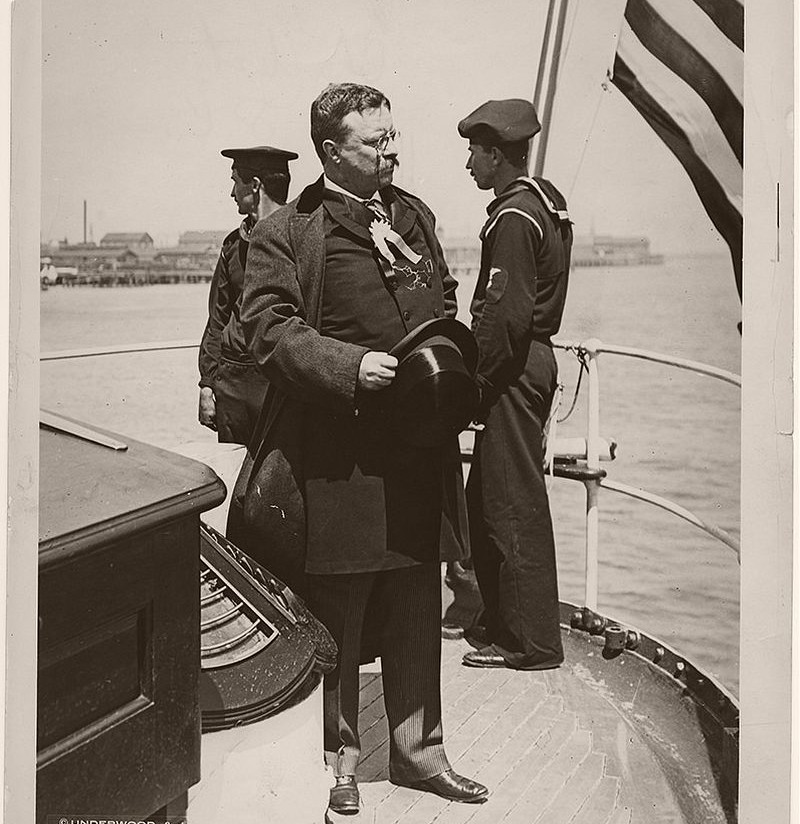 The President of the Globe

Theodore Roosevelt tried to develop the United States as a global imperialist power. His expressions “big stick policy” and “global policeman” were widespread. Roosevelt pioneered racial tolerance when invited African American to the White House for the first time. Also, Theodore Roosevelt founded the Ministry of Trade and Labor, established control over the territory of the Panama Canal.

And of course, we remember that Theodore Roosevelt was a person behind the National Parks legislation, which preserved unique nature of America.

In the 1904 election campaign, Theodore Roosevelt criticized the abundance of monopolies, but also struck deals sponsoring the Republican Party with tycoon’s money. Roosevelt refused the third presidential term and nominated William Taft instead. 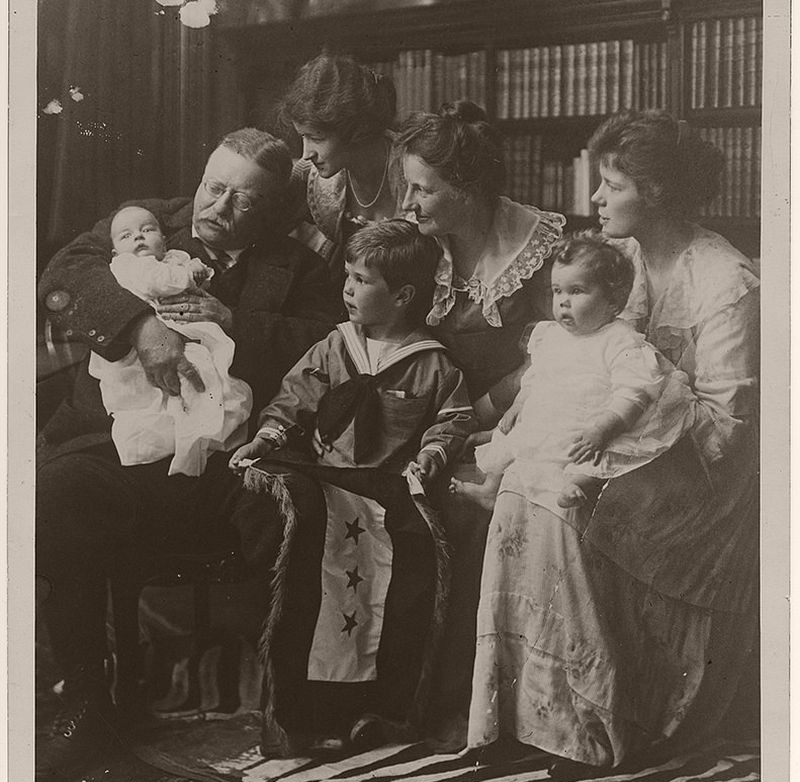 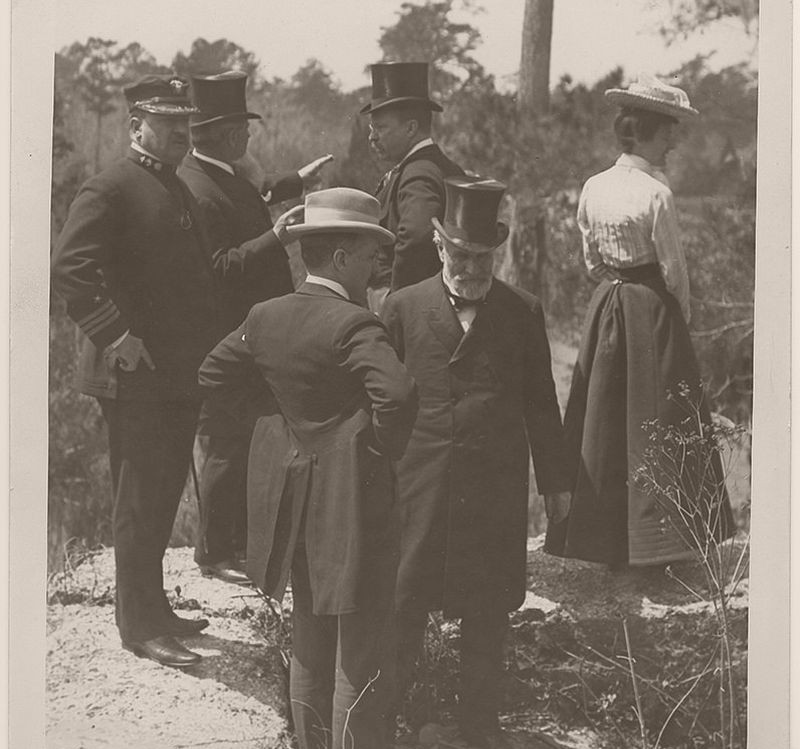 Theodore Roosevelt and other members of the presidential Republican party, at the remains of Fort Dorchester, a fort built in 1757 for munitions storehouse. The personages in the foreground, left to right, are George B. Cortelyou, Presidential Cabinet Secretary, and James Wilson, Secretary of Agriculture. In the background, left to right, are an unidentified Navy lieutenant, an unknown man, President Theodore Roosevelt, and Edith Carow Roosevelt. Old Dorchester, Dorchester County, South Carolina. April 9, 1902. 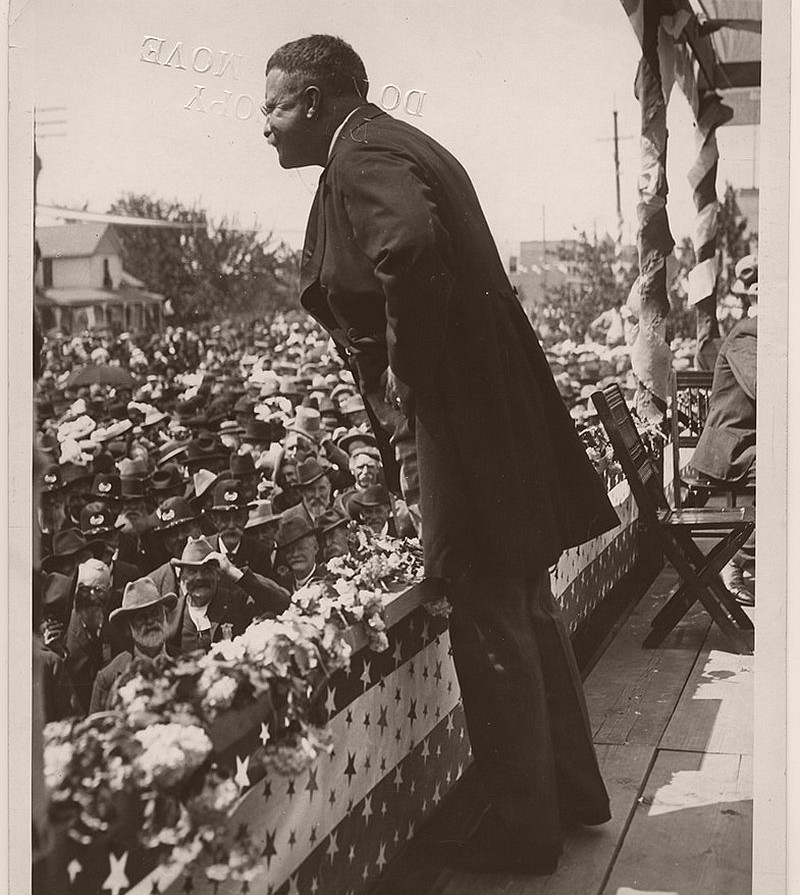 President Theodore Roosevelt is speaking in North Yakima, Washington. May 25, 1903. President Theodore Roosevelt is shaking hands with Clinton B. Sears, President of the Mississippi River Commission, on the steamboat the USS Mississippi. October 4, 1907. 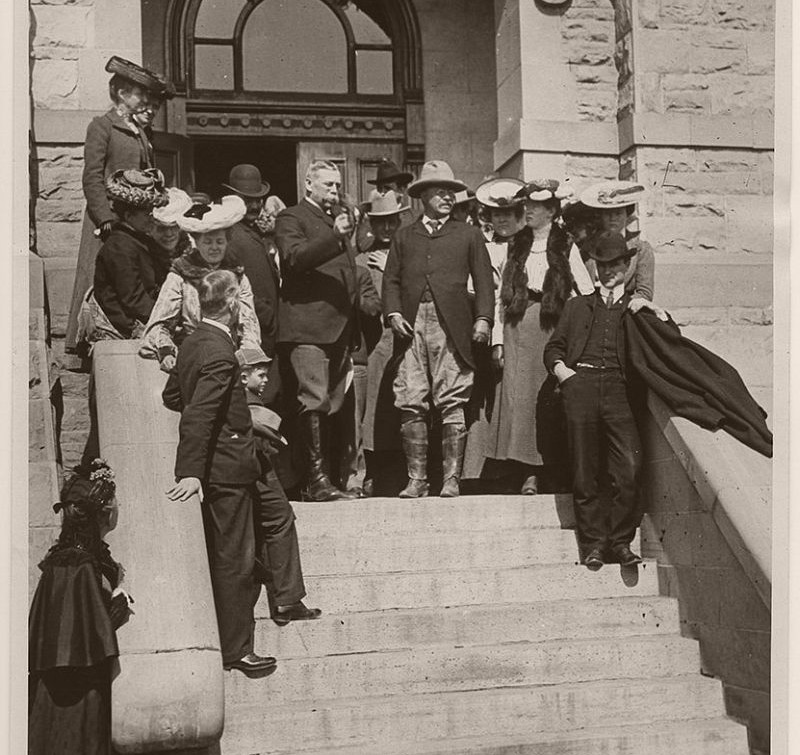 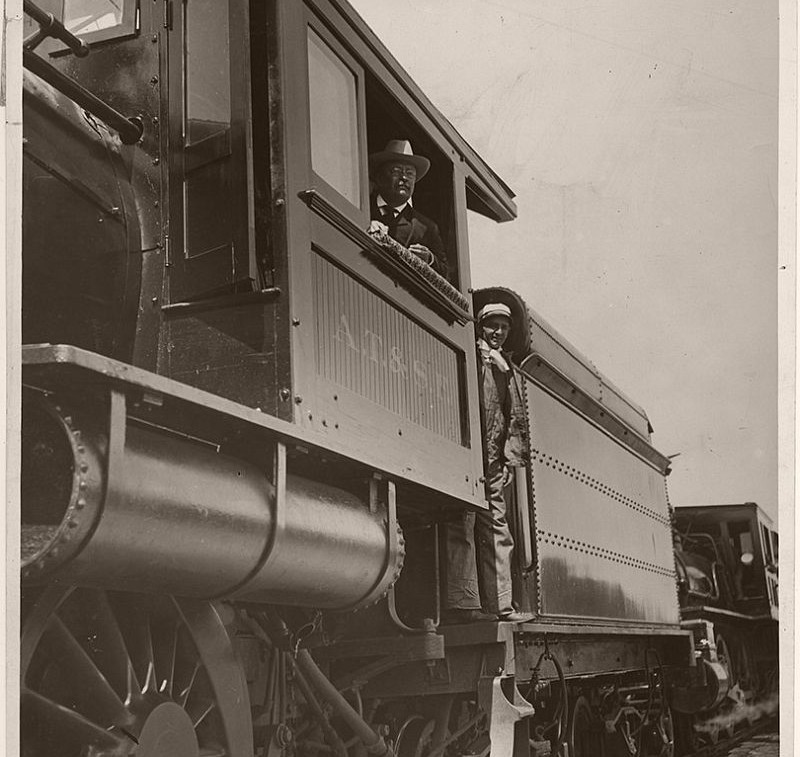 President Theodore Roosevelt is posing in the cab of his locomotive, while campaigning for re-election, ca. May 1903 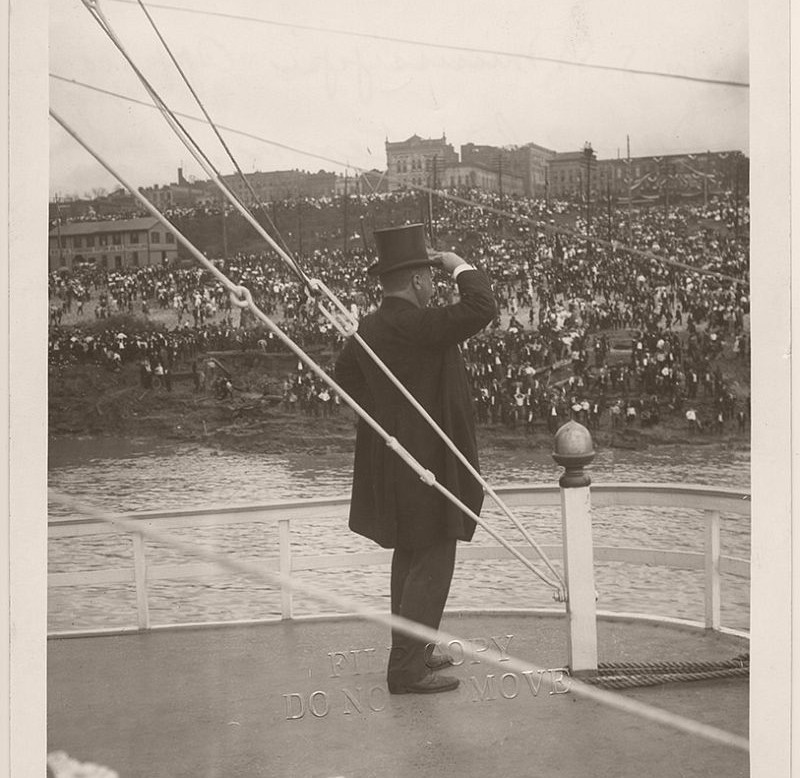 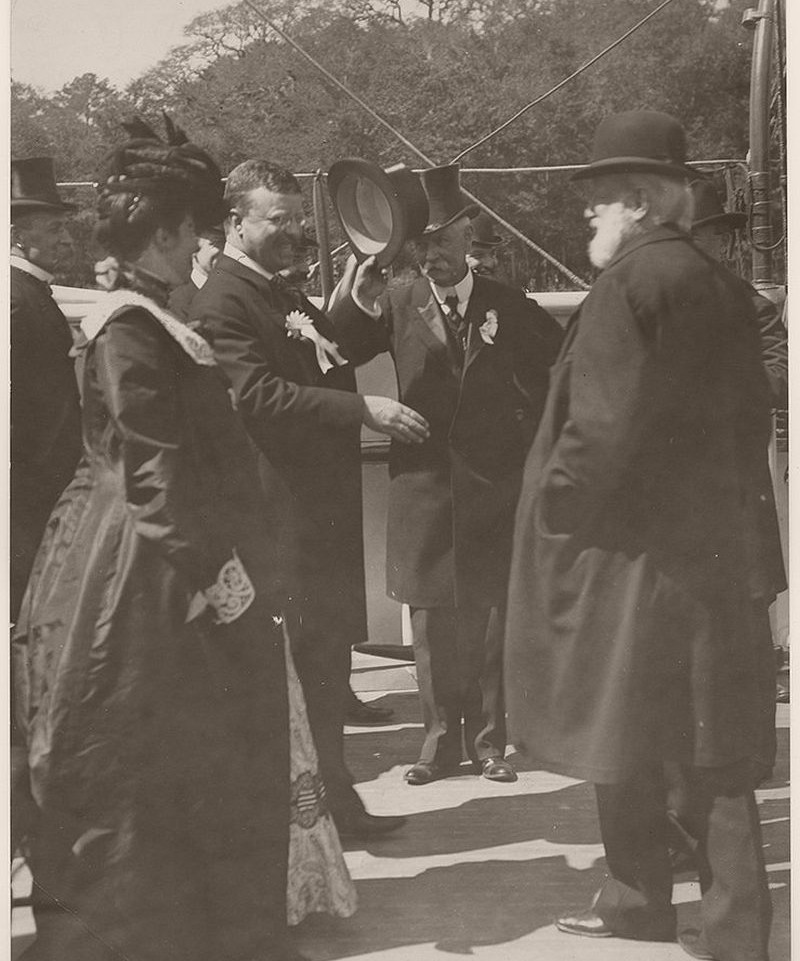 President Roosevelt on horseback, preparing to survey the battlefield on which the Battle of Chickamauga took place. Chickamauga, Walker County, Georgia. November 13, 1902. 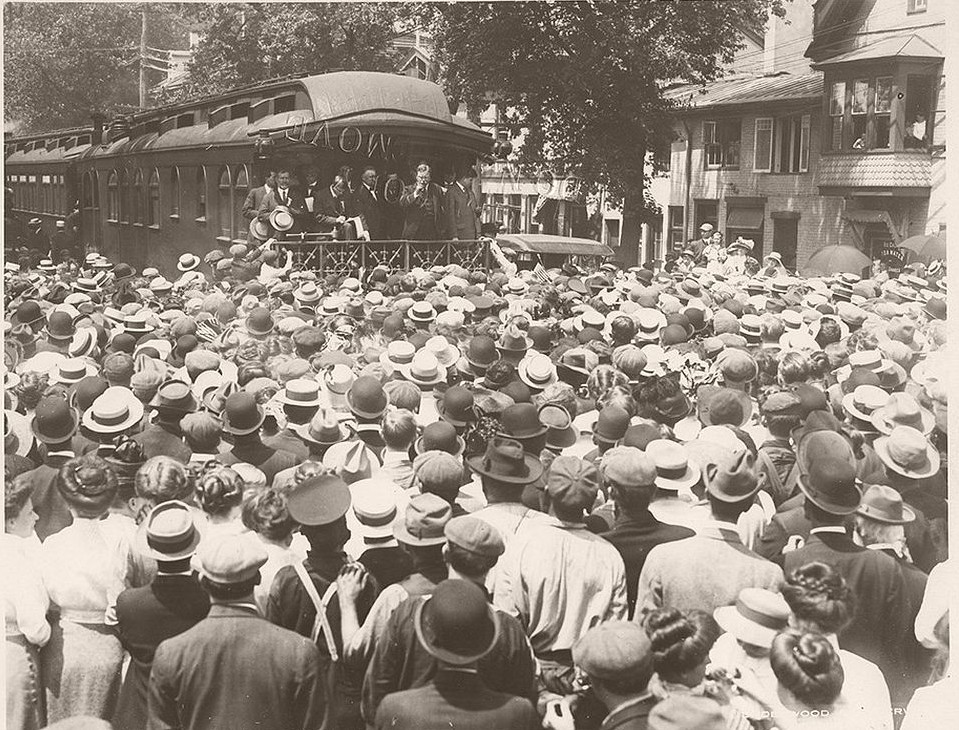 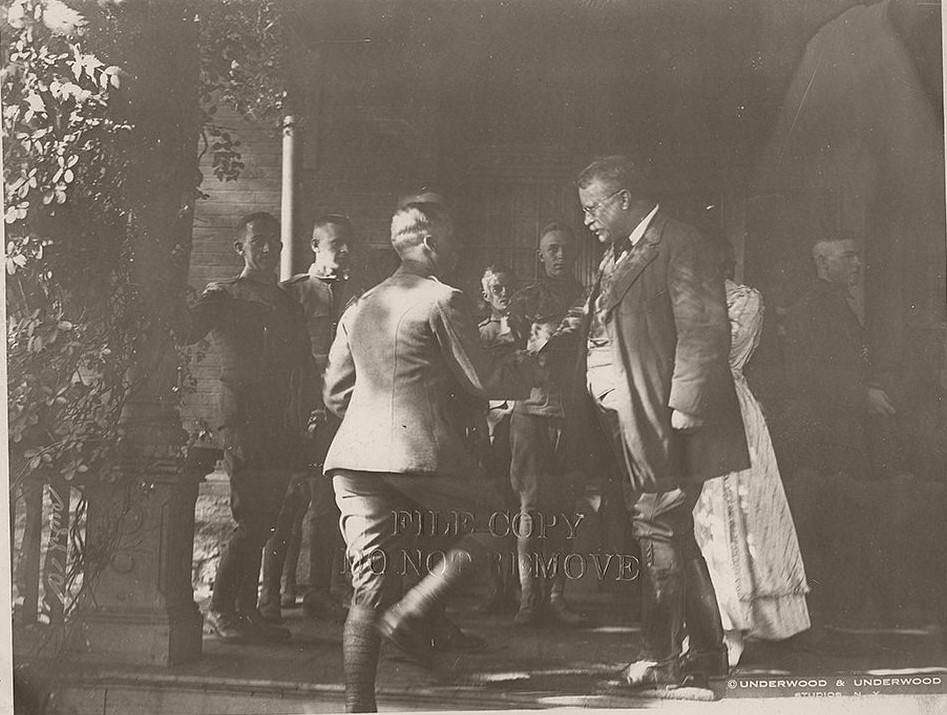