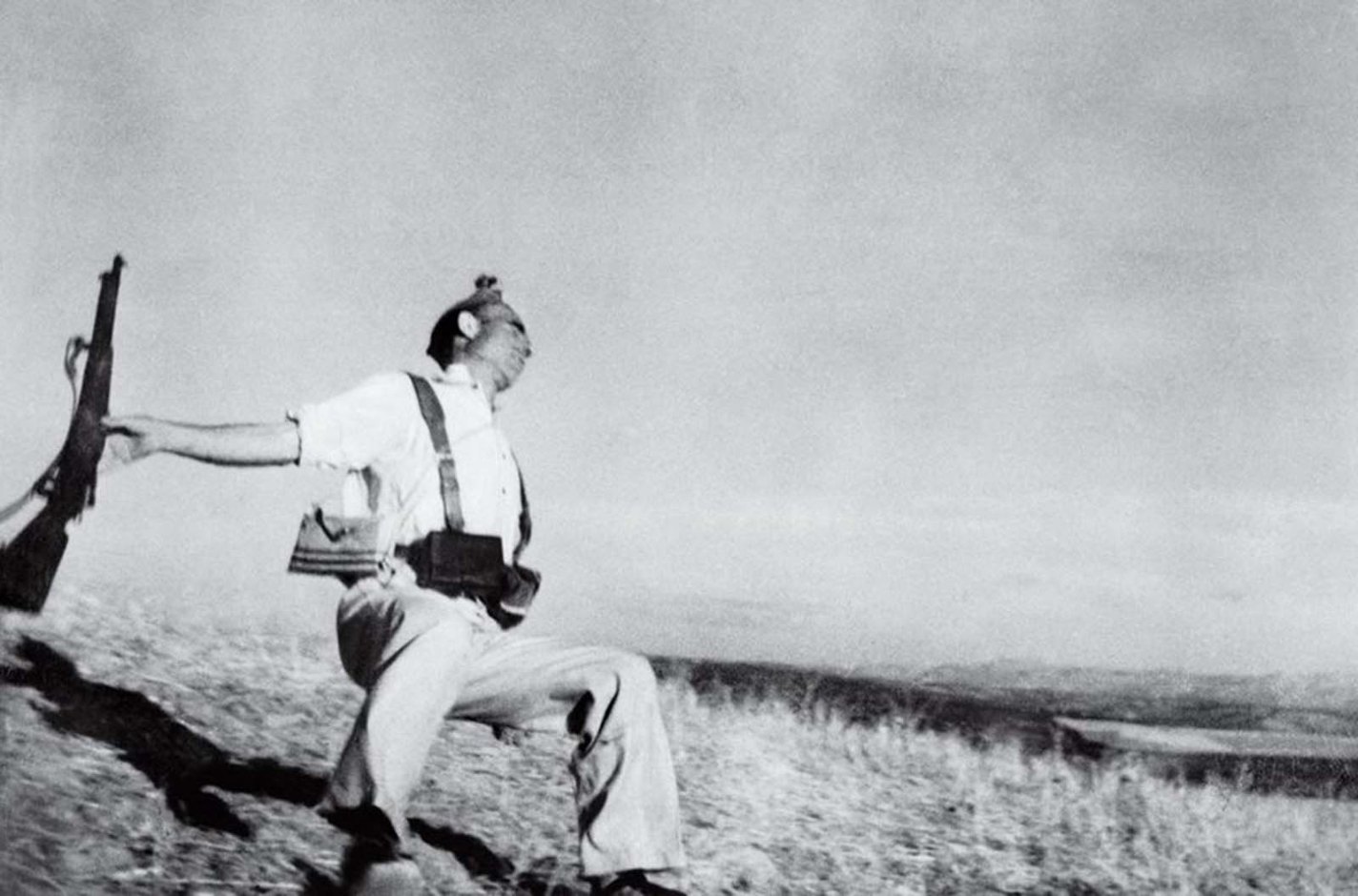 The ‘Falling Soldier’ picture by Robert Capa became famous due to the efforts of his colleague and girlfriend Gerda Taro. It was her idea to present photos taken by her and Endre Ernő Friedmann (Capa’s real name) to European magazines as photos of famous American photographer Robert Cappa. Later she used her name and got fame as Gerda Taro.

The ‘Falling Soldier’ photo gained worldwide popularity, hit the pages of top magazines. It even occupied its place among the Top 100 most influential photos in history, according to Time magazine. Overall, Robert Capa’s portfolio is not as rich as other war-correspondents’ archives, like Susan Meiselas or Eddie Adams. Nonetheless, the ‘Falling Soldier’ image is an invaluable historical documentary of the Civil war in Spain.

The photo of a falling milicano soldier became a tipping point in Capa’s career as a photojournalist. The image received mixed critics upon its publication in Europe for its realism, cynicism, and violence. The ‘Falling soldier’ hit the pages of French Vu magazine first and reached Life magazine then. The American public also was disturbed by the photo of mans’ death.

Robert Cappa used to say that he spent many long days with the soldiers: “I was there in a trench with about 20 milicianos with 20 old rifles standing against Franco’s squad with a machine gun. My milicianos were shooting in the direction of their machine gun for five minutes and then stood up and yelled, “Vamonos!” (let’s move on), got out of the trench and ran towards the position of the machine gunner. Then the machine gun started firing back, and milicanos laid down to the ground, looking for the cover. They followed with few rifle shots in the direction of the opponents, forcing the gunner to stop firing. Then ‘Vamanos’ yell, again, followed by the next short sprint. Robert Capa didn’t have other option but to run with the Spanish republicans. During the last sprint, he just kind of put his camera above the head without any focus and pressed the shutter on the go. Capa didn’t even have time to edit or somehow polish his negatives. He just sent it as is to the magazine editorial staff, hoping to hit the publication pages. Capa stayed in Spain for three months and came back as a very famous photographer because that sloppy camera shot caught a man at the moment when he caught his bullet.”

‘Falling soldier’ is a lie?

Nobody doubted Capa’s words until 1970th. All Capas’ friends and relatives insisted on the authenticity of the photo. But there are several facts about the picture that raise a lot of questions. First of all – location: the territory boundaries, controlled by milicanos,  do not coincide with actual photo location.  Also, witnesses were claiming that Capa staged the ‘Falling Soldier’ photo. Capa had a habit of leaving photos without names and never wrote the personal names of people in focus. Due to these controversies, historians doubt in the ‘Falling Soldier’ story.

Also, there is evidence that Capa and Taro asked milicianos to pretend they were under fire. Years later, Capa told fellow photographers that ‘that day was a theatre.’ Anyway, Capa admitted publicly that he staged ‘Falling Soldier.’

‘Falling Soldier’ image is too bright for its dynamic composition. Especially when we keep in mind that Robert pressed the shutter on the go.

The photo is viral in Spain, and there is no possibility to identify the dying man, there are no records or clear proof, and memories of the participants of that day are very diverse.

These and many other myths around the ‘best-known’ war photo, and the fact that original and all negatives are lost create a very mystic aura: the picture is still discussed, investigated, and serves as the inspiration for the next generation of photographers.

By Anna Ramirez
6 Mins read
Alfred Eisenstaedt photos are an integral part of the history of photojournalism. He captured informal portraits of kings, dictators, scientists, athletes, and…
Subscribe
0 Comments
Inline Feedbacks
View all comments
×
Photo of a day