Ernest Hemingway and a dead cat 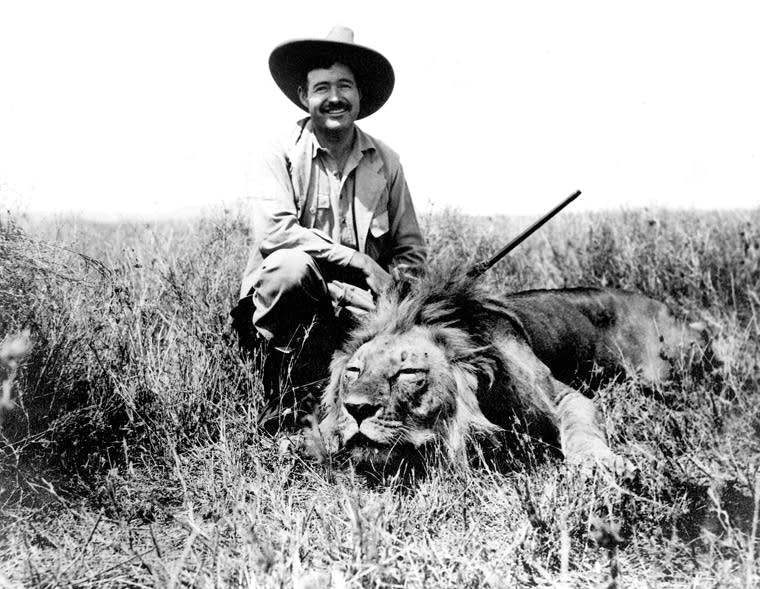 Everyone knows Ernest Hemingway as a cat lover. But there was at least one cat which was killed by the writer’s love. The genius prosaic Ernest Hemingway was also an avid hunter. He traveled to Kenya in 1933 and spent three months on safari. A prominent writer, he left detailed memories about those days:

“Now it is pleasant to hunt something that you want very much over a long period of time, being outwitted, out-maneuvered, and failing at the end of each day, but having the hunt and knowing every time you are out that, sooner or later, your luck will change and that you will get the chance that you are seeking”.

After all, Hemingway’s male characters celebrated courage and masculinity, and in many cases, they could be called avid hunters. Maybe, it will be honest to say: he romanticized hunting to Americans. After all, he pictured his glory moment with a dead lion.

His novels “The Snows of Kilimanjaro” and “The Short Happy Life of Francis Macomber” both filled with men looking for adventure on African safaris, armed with rifles and ready to hunt down every animal (not only) they want.

No one goes home with a lion head to mount on their dental clinic wall. But only Hemingway could stay a cat lover after all this.

Until the last years of his life, Hemingway continued hunting adventures, hunting during travels to Europe in 1948, and not missing a chance to shoot in Spain in 1958.

By Andrew Piper
3 Mins read
THE LAST YEARS of Ernest Hemingway and his tragic death have left many questions and secrets. Even today, it is not completely…
Stories

By Andrew Piper
3 Mins read
A timeless icon, Ernest Hemingway gained popularity not only for his manhood prose and stormy life full of dangers. He was famous…
Stories

By Andrew Piper
2 Mins read
Ernest Hemingway confessed once that the main reason for his trip to Italy in 1948 was the inspiration. He wrote his…
Subscribe
1 Comment
Oldest
Newest Most Voted
Inline Feedbacks
View all comments

[…] Meanwhile, Ernest Hemingway didn’t enjoy all the cats he met. Some of them ended their days in a sad way. […]