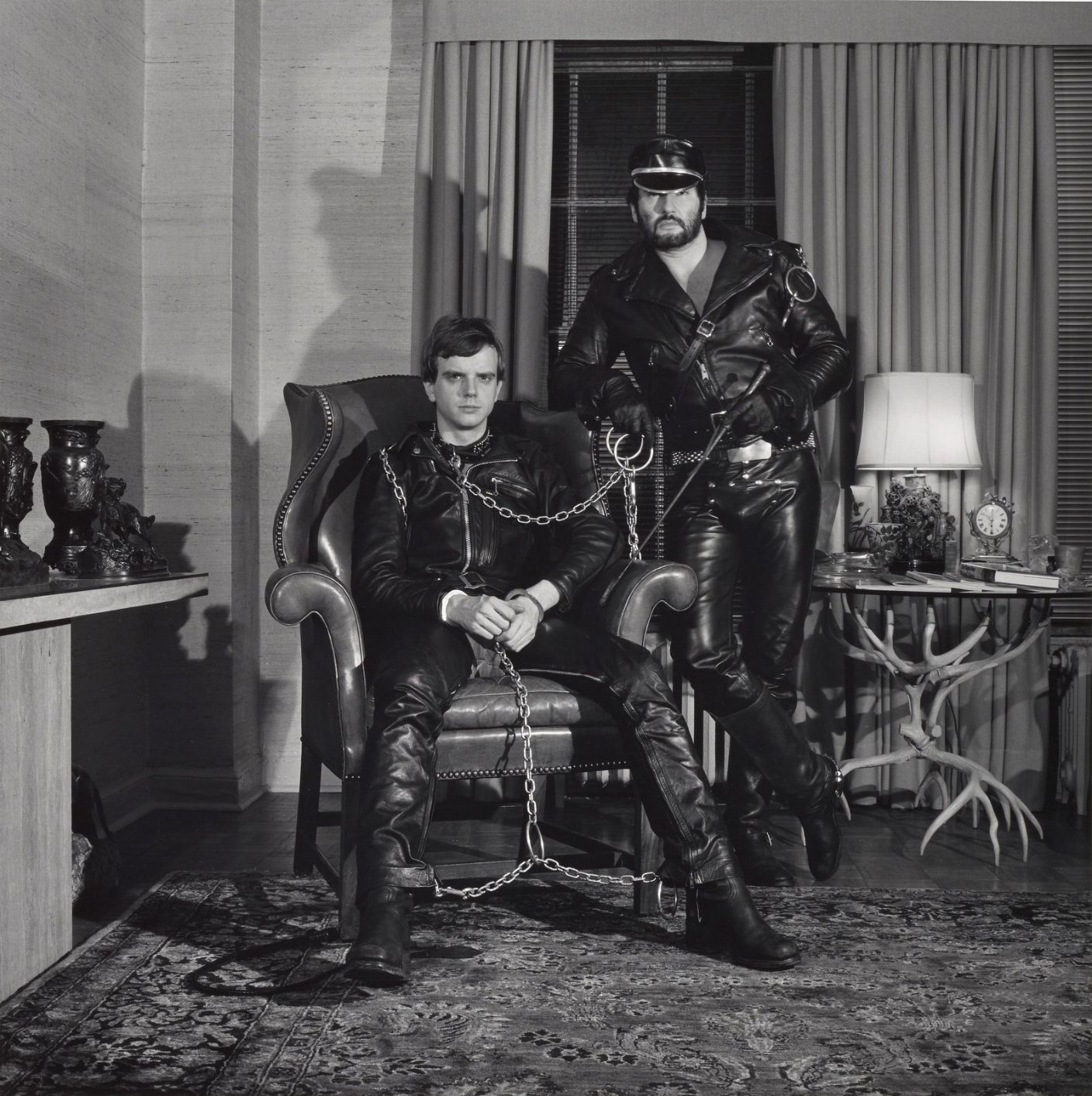 Robert Mapplethorpe promised to give this image to J.Paul foundation after his death.

It’s hard to overestimate what the late 70s meant for the gay community. Several cities and states passed homosexual decriminalization laws and ordinances, and sexual discrimination was prohibited. And Robert Mapplethorpe was a one who captured with his photos the historical moment when gays were set free with his various provocative images, including the picture of Brian Ridley And Lyle Heeter, made in 1979.

This Robert Mapplethorpe photo of gay partners in a full sadomasochistic set was picked for the Top 100 most influential photos in history by Time magazine.

There’s nothing special about this photo as of now, but it was a tabooed topic for photographers (at least for their public portfolios) before the late 70s. 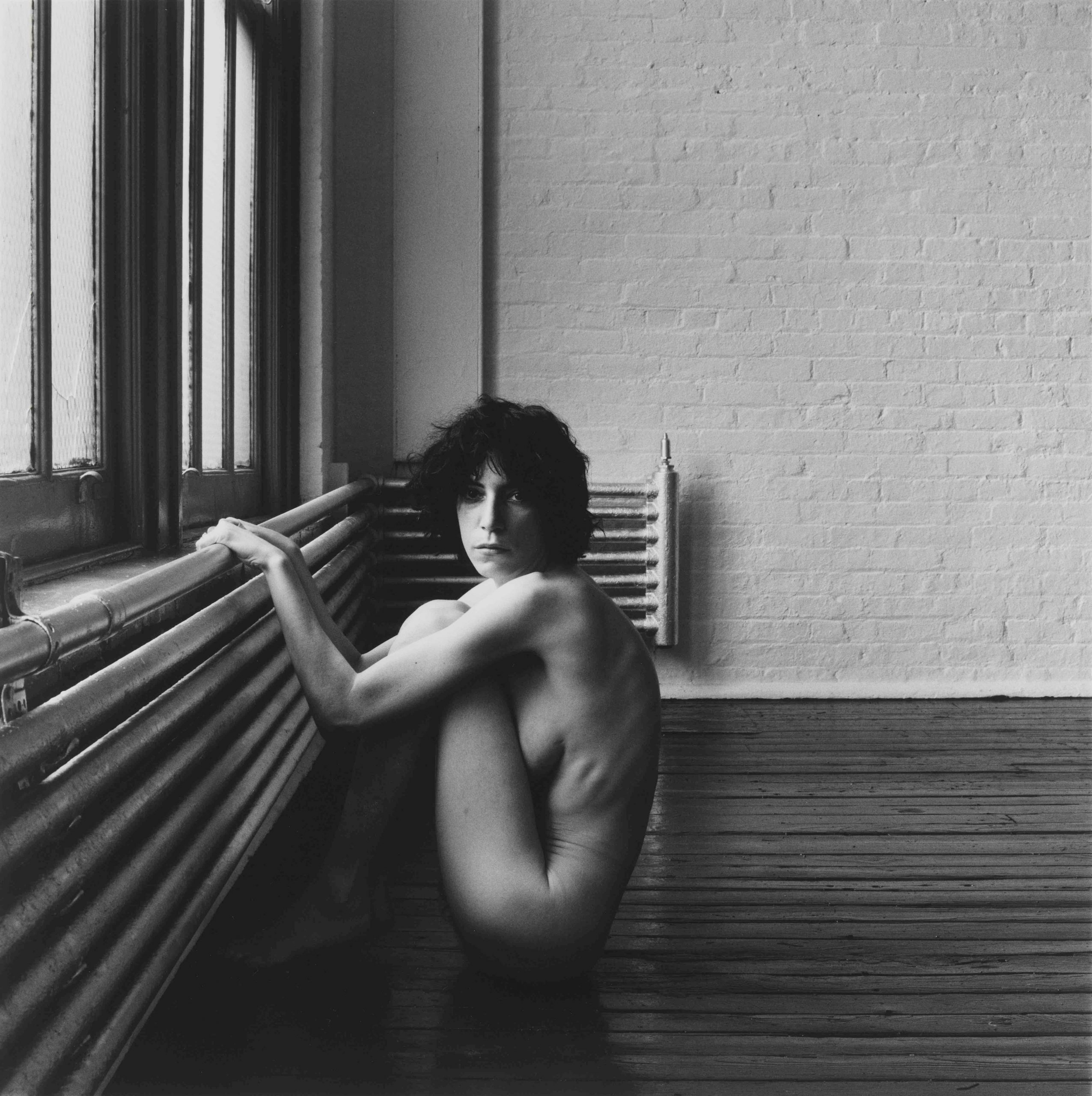 Patti Smith was both muse and roommate for Robert Mapplethorpe. This is her ‘Horse’ album cover shot.

Robert Mapplethorpe played with contrasted casual living room environment with Brian Ridley And Lyle Heeter, covered with latex and leather, chained, with a whip in hands. Americans didn’t consider such a provocative image, and the gay lifestyle in general, as acceptable then, and it was a considerable risk for Mapplethorpe to promote this image together with an uncovered portfolio of his pictures of the underground gay life in New York. 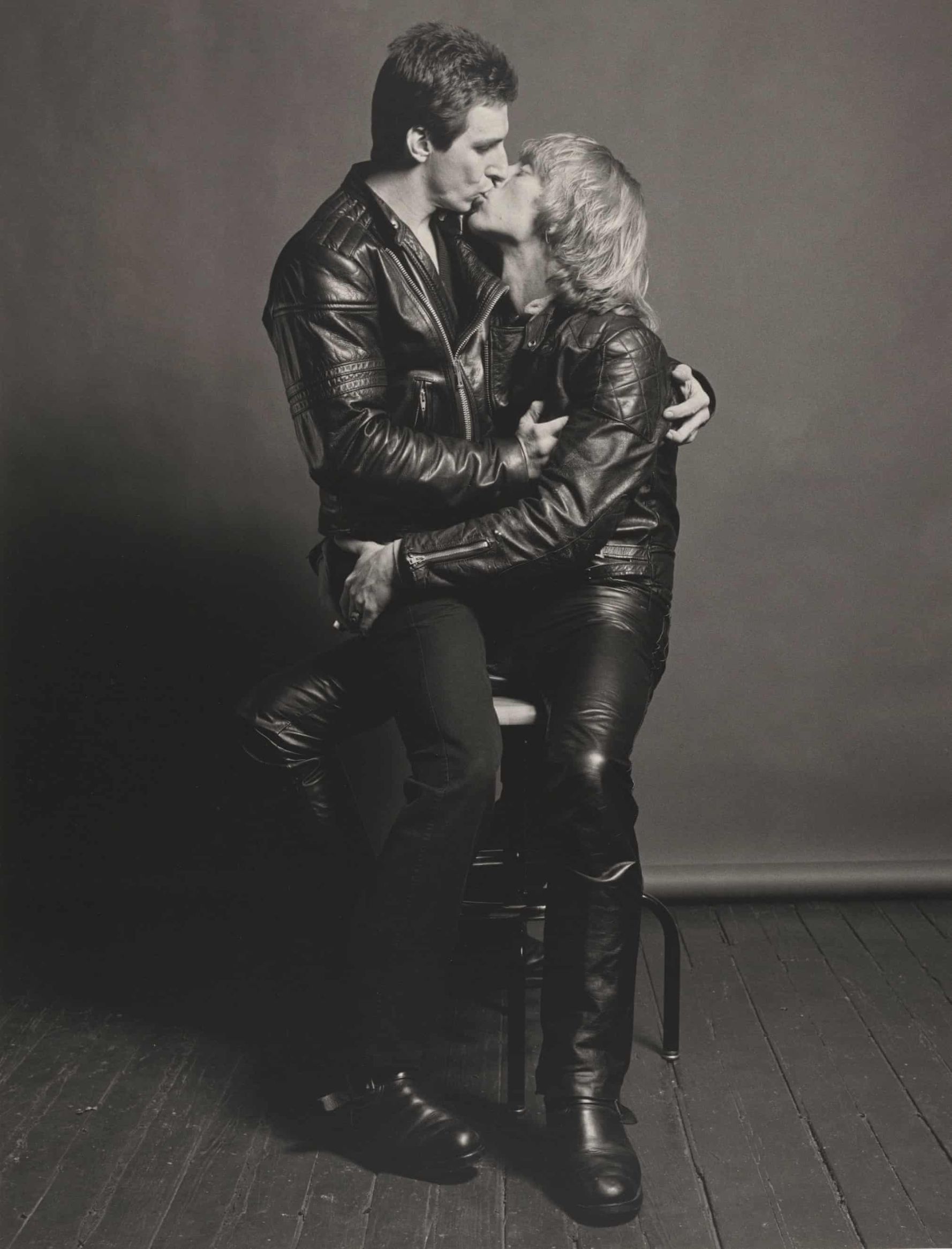 In his photographs of male lovers, Mapplethorpe captured the community of gay men in New York, San Francisco, London, and Paris. Photographer paid attention to many nuances called to express the inner world of the heroes. Intimacy also was a cornerstone of his images. Mapplethorpe not only portrayed his sexual partners and mates, but he also opened and extra social layer to the public, emphasizing its political and historical significance.

With his gay photos Robert Mapplethorpe was a real pioneer in legitimizing photography as a contemporary art form and democratizing sex as something that pretty much everyone partakes in. He spent most of his life in the New York combining picturing of gay life with celebrities and everyone from the gossip pages of the newspapers.

Mapplethorpe proved himself as a first-class photographer after collaborating with Debbie Harry, Richard Gere, Patty Smith (Robert’s muse and roommate), and including the world’s first female bodybuilding champion, Lisa Lyon. 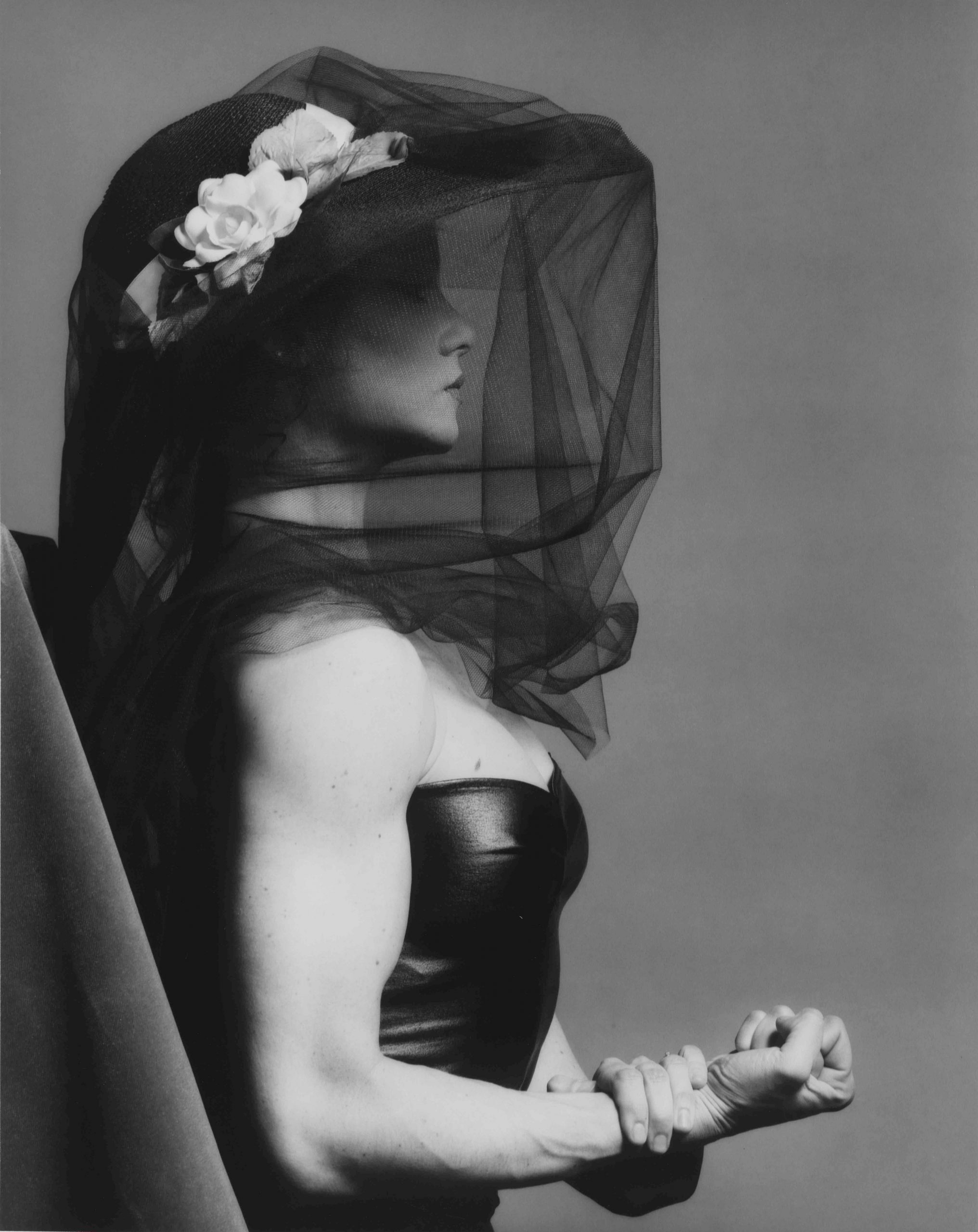 Robert used to compare the success of Lisa Lyon with coming outs made by gays in the late 70s.

During the early 70s Robert had no viable plans in becoming a photographer. He didn’t even have a camera. But he was spending his time reviewing the gay magazines and discussing with his friends some ideas of improving photos in that media. In 1970, he had started taking portraits of himself and Patti  Smith with a borrowed Polaroid. Robert couldn’t afford to buy a camera and even a 3-dollar film pack was a kind of problem for the beginner cameraman. 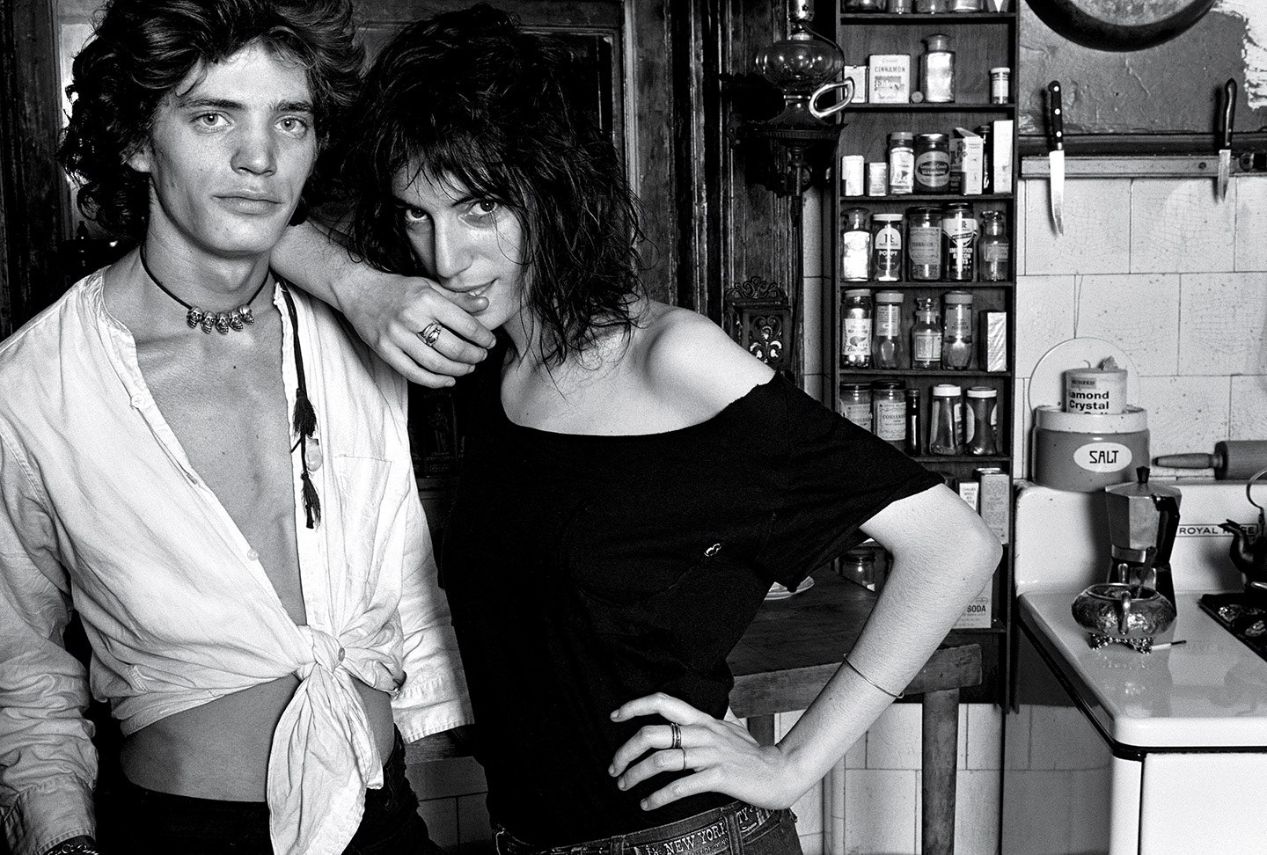 Over the years, critics focused on Mapplethorpe’s ideas of authenticity, as if some of his pictures filled with real Robert’s views, and some not. Could he use homosexuality nakedness just to promote his portfolio? Or was he using his exceptional photo techniques to give pornography the scene of high art? Neither was the case. 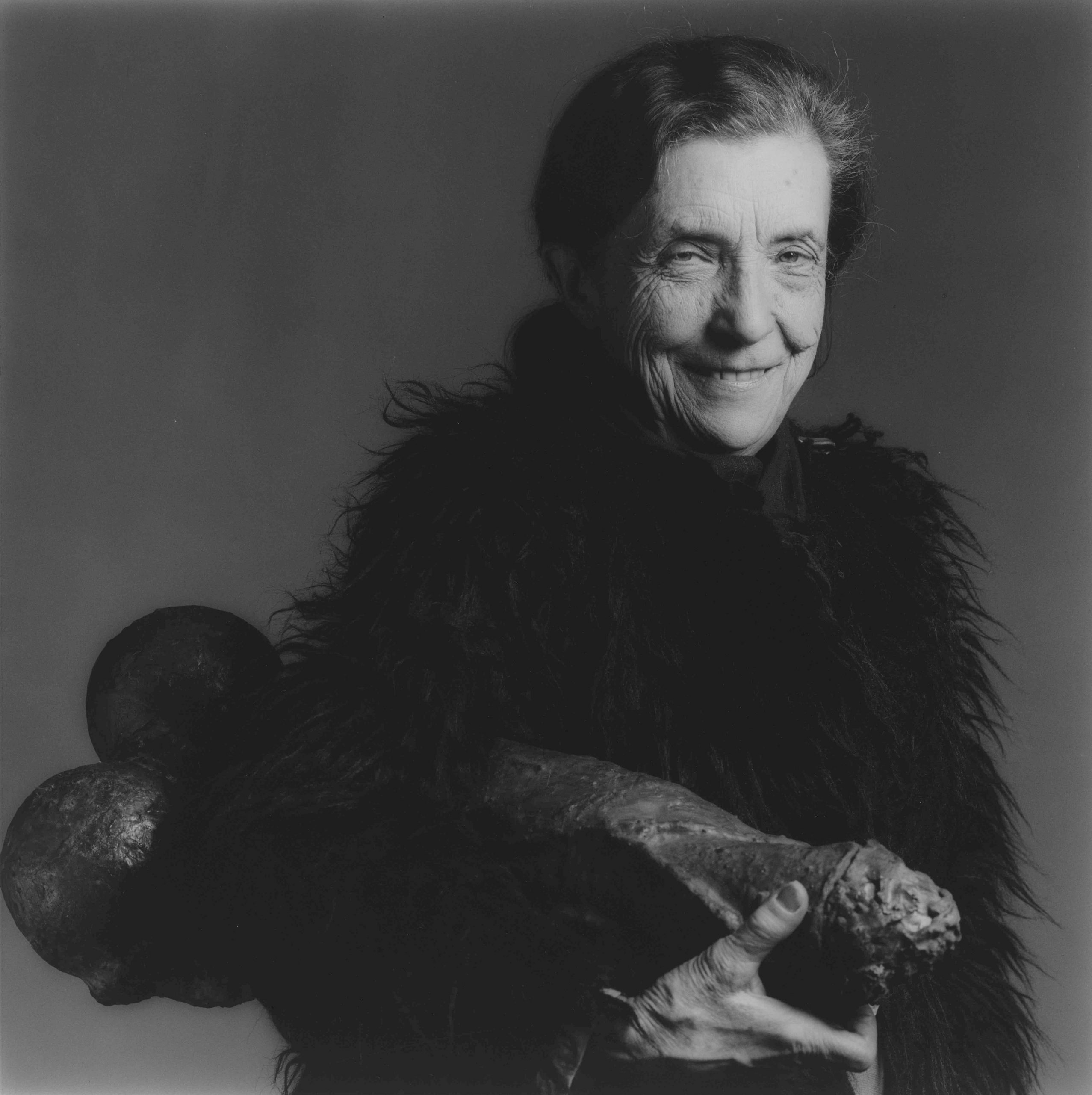 Louise Bourgeois with a wooden penis, 1979

Instead, Mapplethorpe seemed to see desire as inherently dignified and, as such, nothing to be confined to dark spaces or behind closed doors. He spent so many years of his life taking gay photos without any hope to become famous with them, that we cannot doubt: everything that Robert Mapplethorpe did he did with his heart. 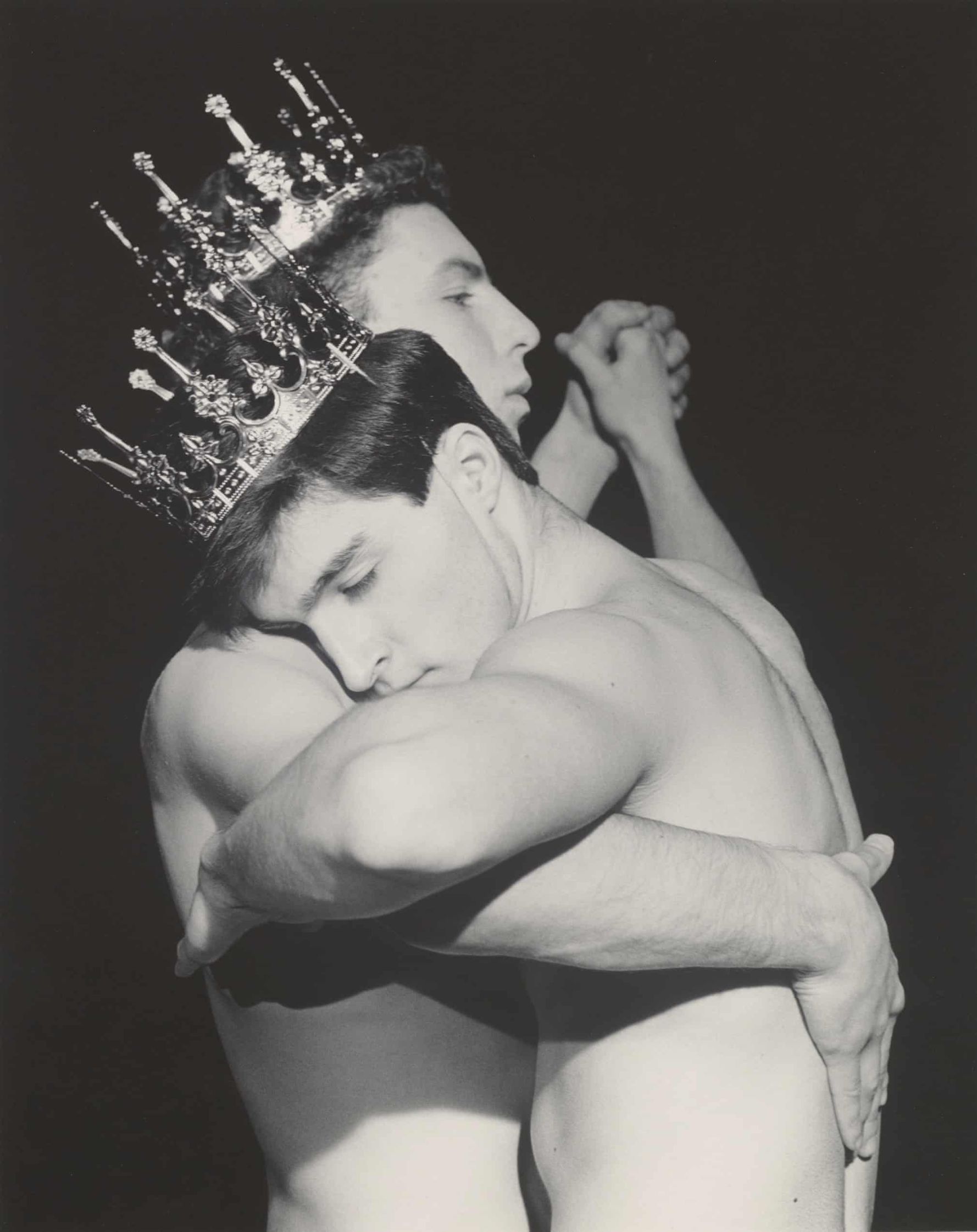 It was a massive risk to come out with homosexuality before the 70s. Mapplethorpe advocated and widespread the idea of gay equality with his brave images. 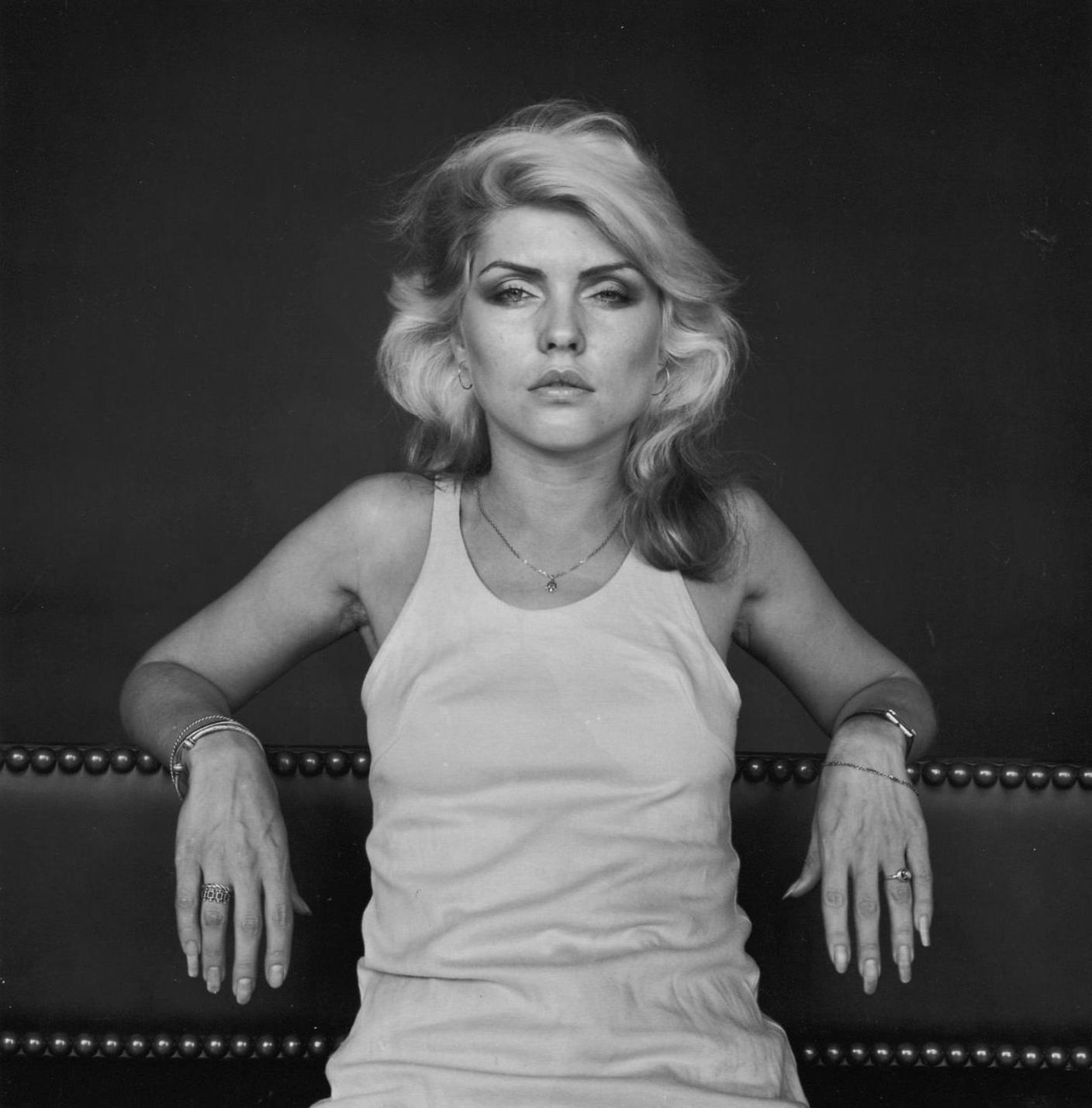 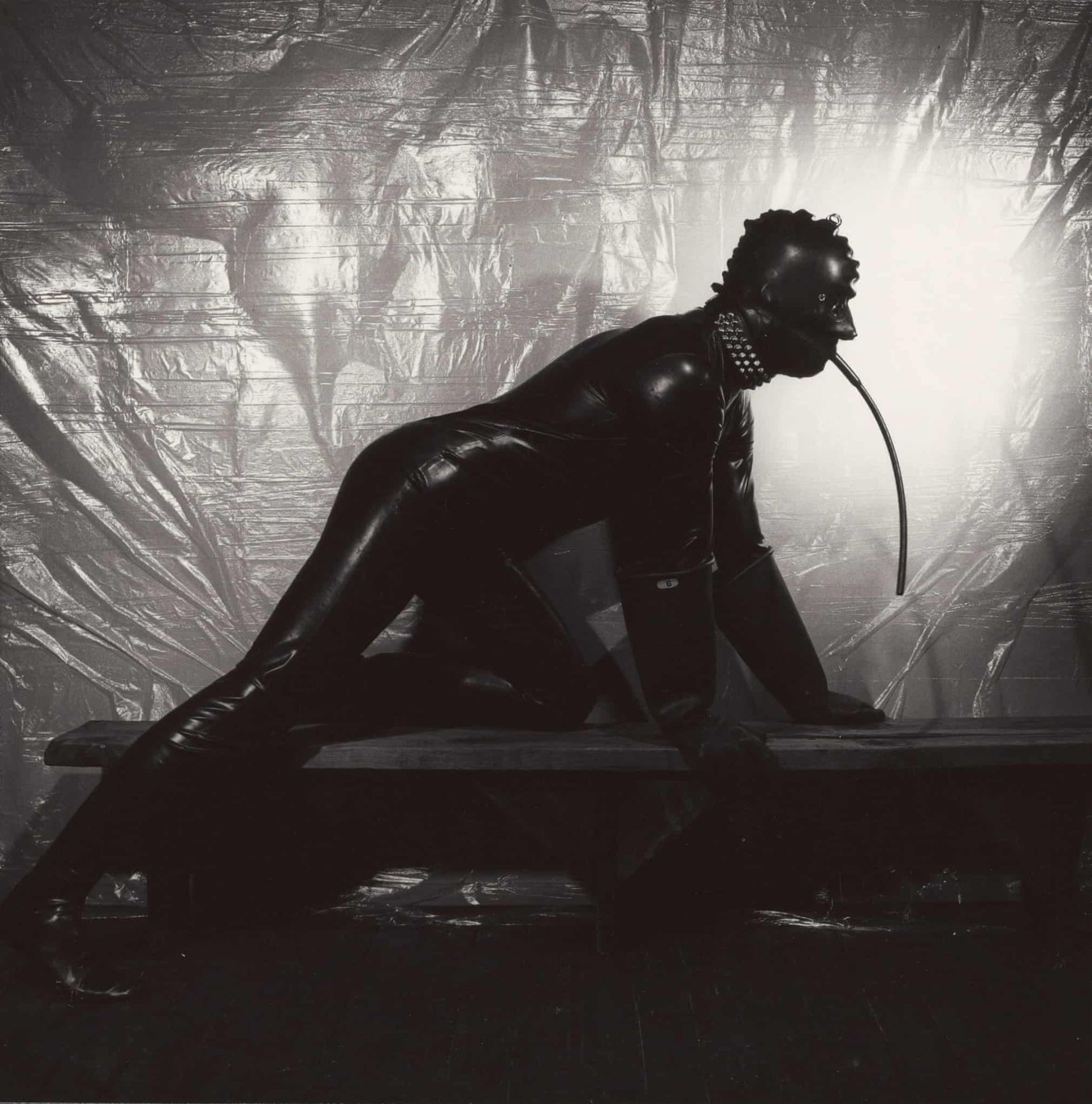 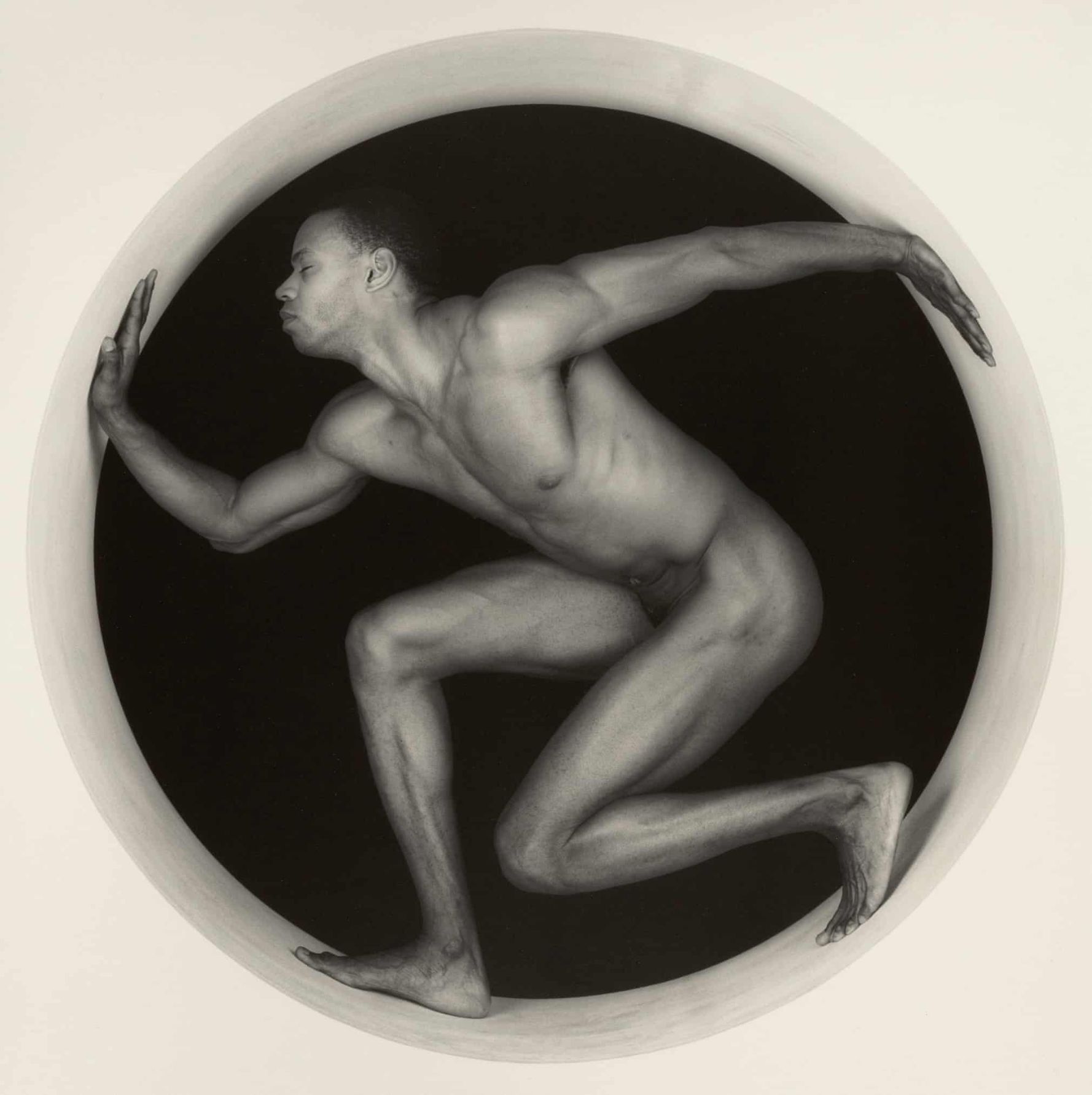