Soviet soldiers and a white bear in Kaliningrad zoo, 1980 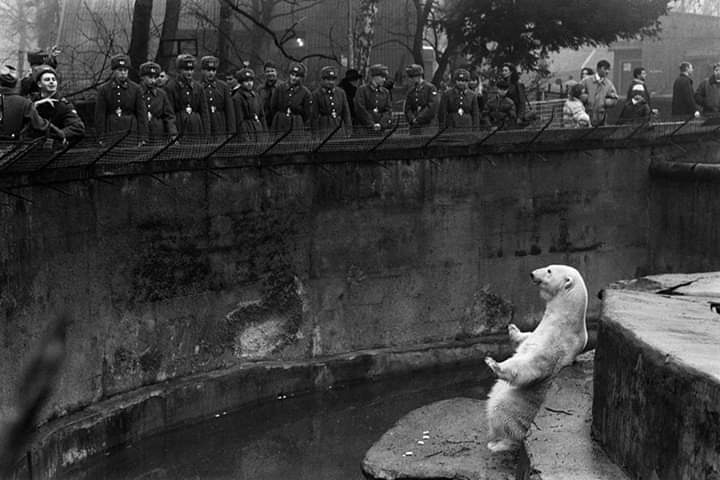 This bear tends to review the WW2 results, as we may guess.

Kaliningrad was a city of Kenigsberg once and became a USSR enclave after the WW2. The large portion of the Russian army and fleet were located in Kaliningrad. There’s nothing special when you see a large group of Soviet military in the zoo, theatre, or any other entertainment location. It was a common practice to grab soldiers and bring them to whatever cultural event to entertain and boost the morale. But this white bear seems to dislike either this soviet practice or just warm weather. We guess this animal would rather relocate to the location of this kind.

Raising a Flag over the Reichstag by Yevgeniy Khaldei,1945

Yevgeniy Khaldei, the Ukraine-born soviet photographer, underwent through World War 2 side by side with soldiers. He walked half of Europe and…
Photo of a day

Yakov Dzhugashvili imprisoned by the Germans, 1942

Yakov Dzhugashvili’s face in this historic photo expresses no hope. The reason is pretty simple: Stalin’s son realizes that he’ll end his…
Photo of a day

Roger Fenton in this historical photo, was one of the first who pictured the real military action. In happen during the Crimean…
Subscribe
0 Comments
Inline Feedbacks
View all comments
×
Stories