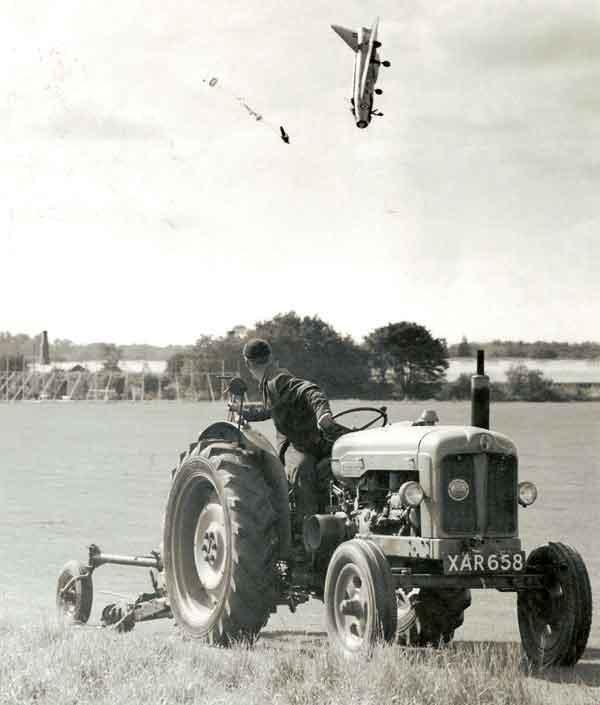 It’s damn lovely when your neighbor is a test pilot in a large aircraft company! He knows a lot of great tales about pilots, these celestials, understand aircraft construction. You will not get bored with him. That’s how the story of the air crash of 1962 begins.

It started as a good friend’s story.

So must have thought a resident of the British town of Hatfield, photographer Jim Meads. He and his neighbor Bob Souray, a pilot for The de Havilland Aircraft Company, which produced the Lightning fighter-interceptor.

On September 13, 1962, their wives met in London again, leaving the children with their husbands and nannies. Jim volunteered to go for a walk with the children. Bob retired in the morning, mentioning, among other things, that he had a flight on the Lightning scheduled for today.

The De Havilland plant and airfield were located in Hatfield, near the Jim and Meads homes. Left alone with the children, Jim frantically began to invent entertainment for kids. And then it dawned on him: why not altogether go to the airfield and watch Uncle Bob piloting the Lightning?

The children accepted the idea with enthusiasm. And Meads himself broke his custom of taking a break from work and took a camera with him, in which there were only two frames. The company was stationed in a field not far from the airfield, from where the fighters taking off and landing was visible.

Get the camera ready!

And now, after anxious waiting, a rapidly increasing point appeared in the sky. The children began to jump excitedly in place, Meads prepared his camera and concentrated – he did not want to sacrifice the last frames for a lousy shot. He didn’t need to worry: the result exceeded all expectations …

Already on the approach to the runway, the incredible happened: the plane abruptly changed its trajectory and rushed to the ground. At an altitude of 60 meters, the pilot separated from the cockpit: Bob urgently ejected. It was this moment that Meads managed to immortalize; the tractor driver, who turned around in a picturesque manner at the noise, even got into the frame.

An investigation revealed that a fire broke out in the fighter’s engine, causing the pilot to lose control. The plane with the serial number XG332 was only three years old: it was released in 1959 among 20 pre-production aircraft.

And now the main twist of the story: when the pilot was pulled out of the greenhouse, it turned out that it was … not Bob Souray!

At the last moment, Bob switched with a fellow flight, so Meads accidentally immortalized the bailout of a non-friend. And he would have known that it would not be Bob who would fly, he might not have been on the field with a camera at all. And we would have nothing to show you in the “Photo of a day” section.