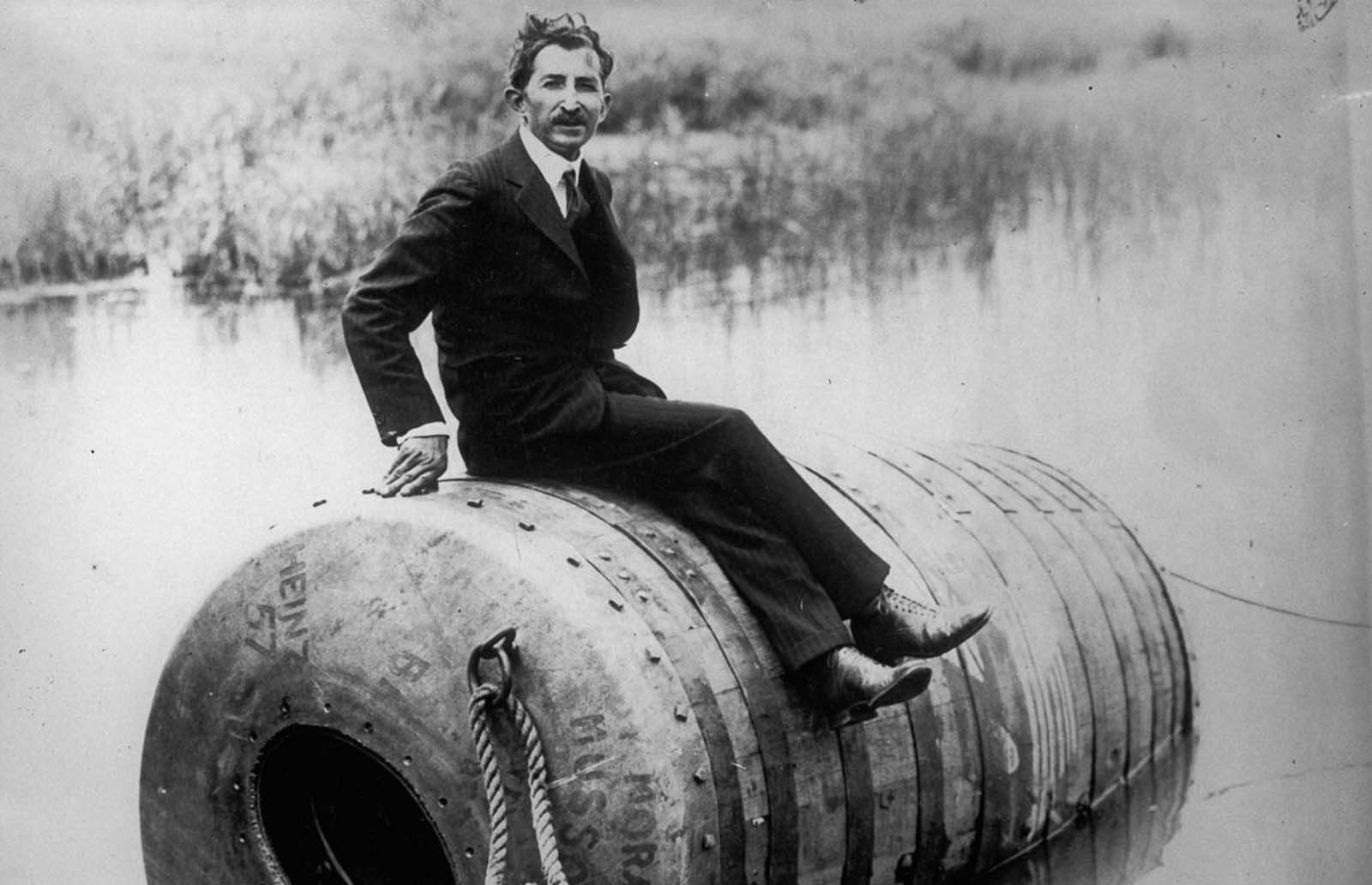 George Stathakis poses on his barrel before taking the plunge. 1930.

Barrel jumps over the Niagara Falls became possible due to the unique relief Niagara river. The erosion of its bottom formed big Niagara Gorge, on which appeared the famous Niagara Falls: Canadian The Horseshoe Falls and American Bridal Veil Falls and American Falls. All three waterfalls are very high (57m/187ft, 30m/98ft, and 21m/69ft, respectively), and the water flow in them is one of the most powerful on the planet. 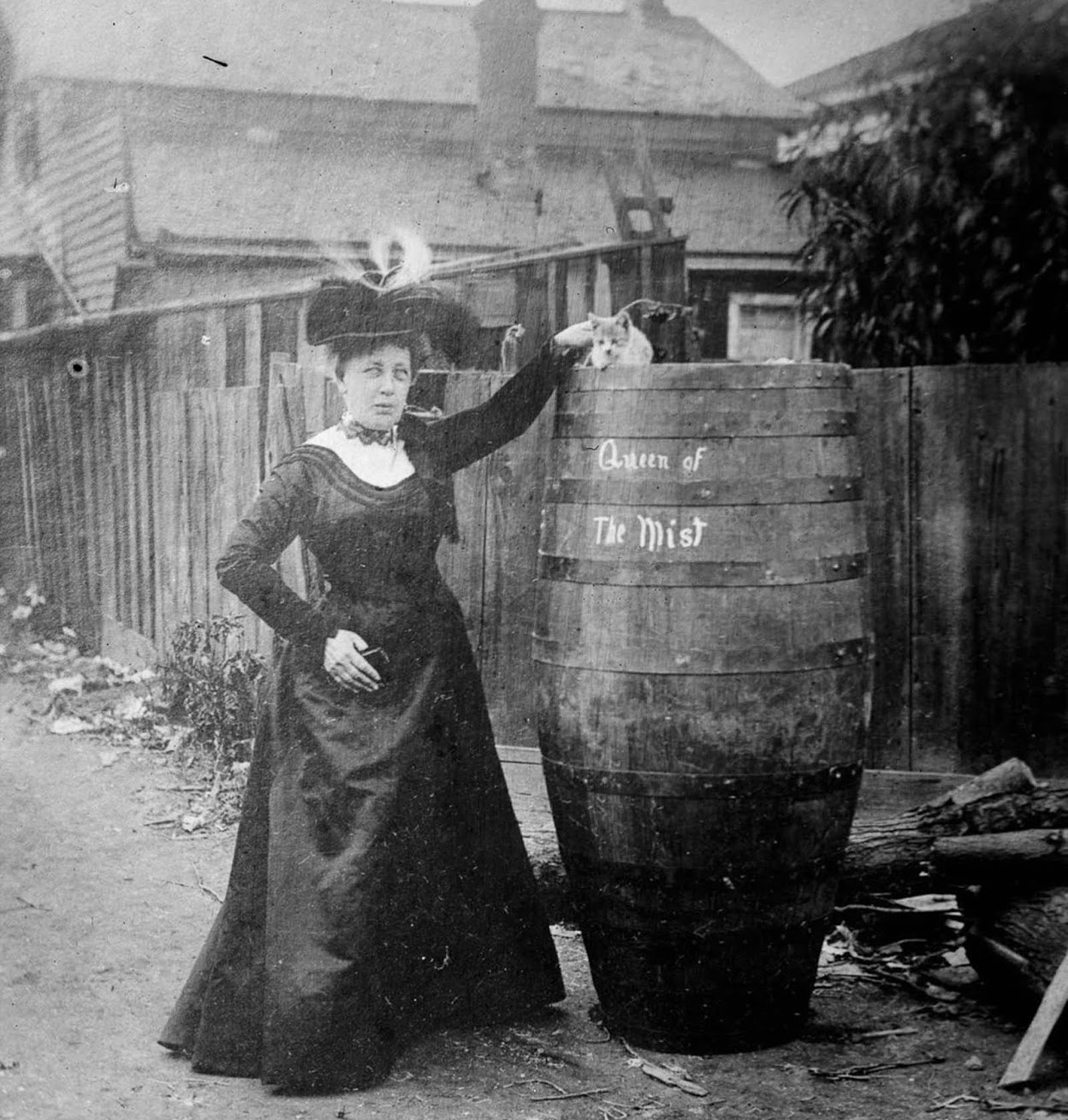 Annie Edson Taylor poses with her cat and the barrel she rode over the falls. 1901.

Since the early years of colonization, these natural wonders attracted people. There are many tales about locals, who were trapped in between the falls, and even more stories about colonizers who tried to cross or to go over them.

People tried to raise money with performances, usually highly dangerous. The public, hungry for Meal’ n’Real came to see the daredevils who jumped from the waterfall tops in barrels, crossed them on the rope, etc.

The first one who dared to challenge the luck was 63-years old Annie Edson Taylor. There is no evidence she was a pioneer of such dangerous performance, or she is the first survivor to speak about this. Anyway, she set the trend. 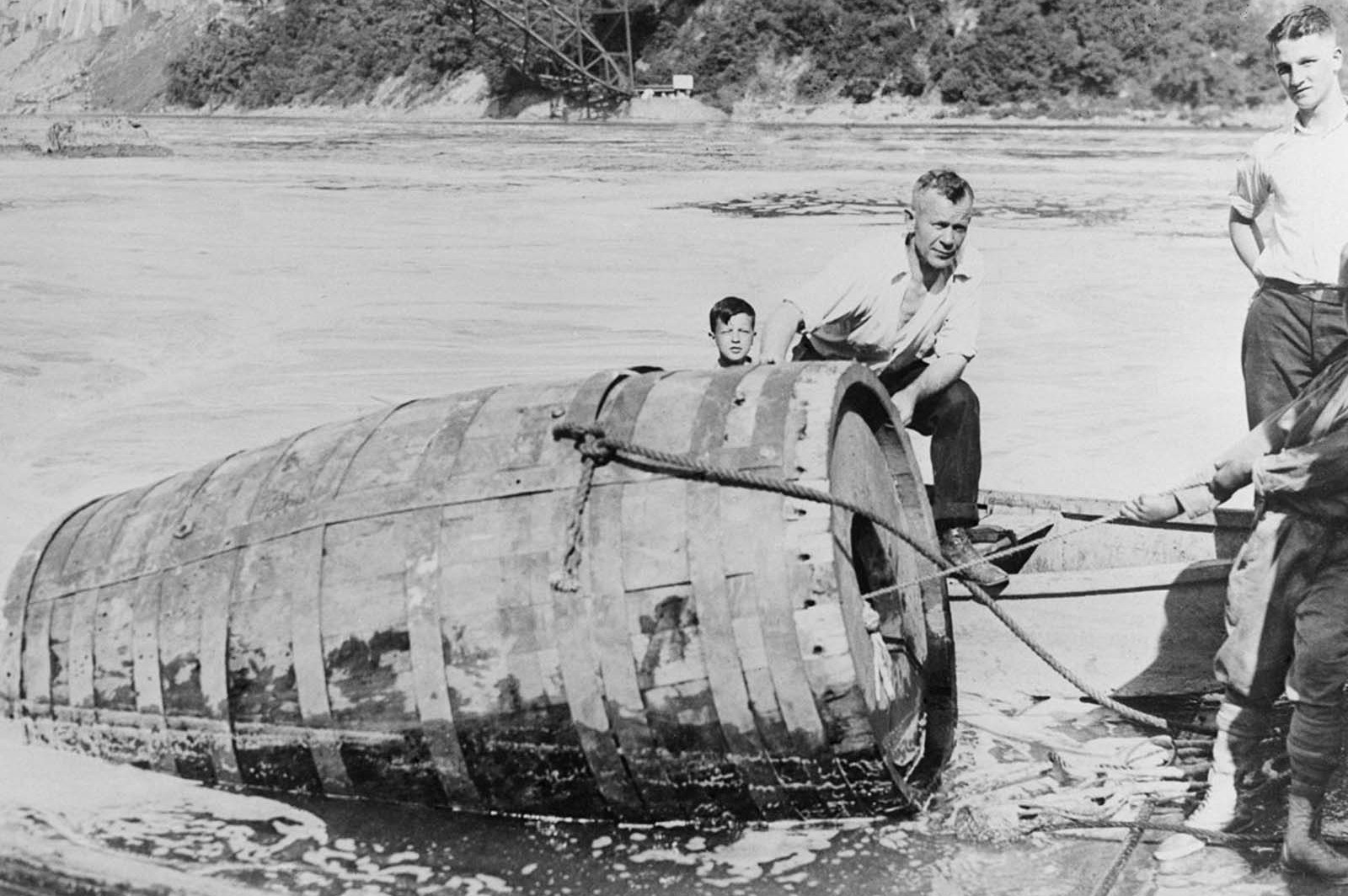 The body of George Stathakis is recovered from his one-ton barrel after going over the falls and becoming trapped for more than 18 hours. 1930. 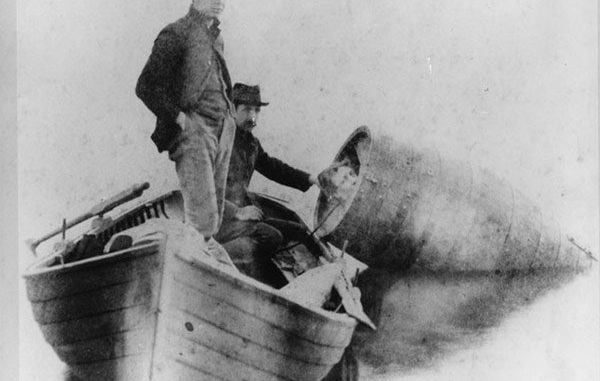 63-year-old schoolteacher named Annie Edson Taylor becomes the first person to take the plunge over Niagara Falls in a barrel. 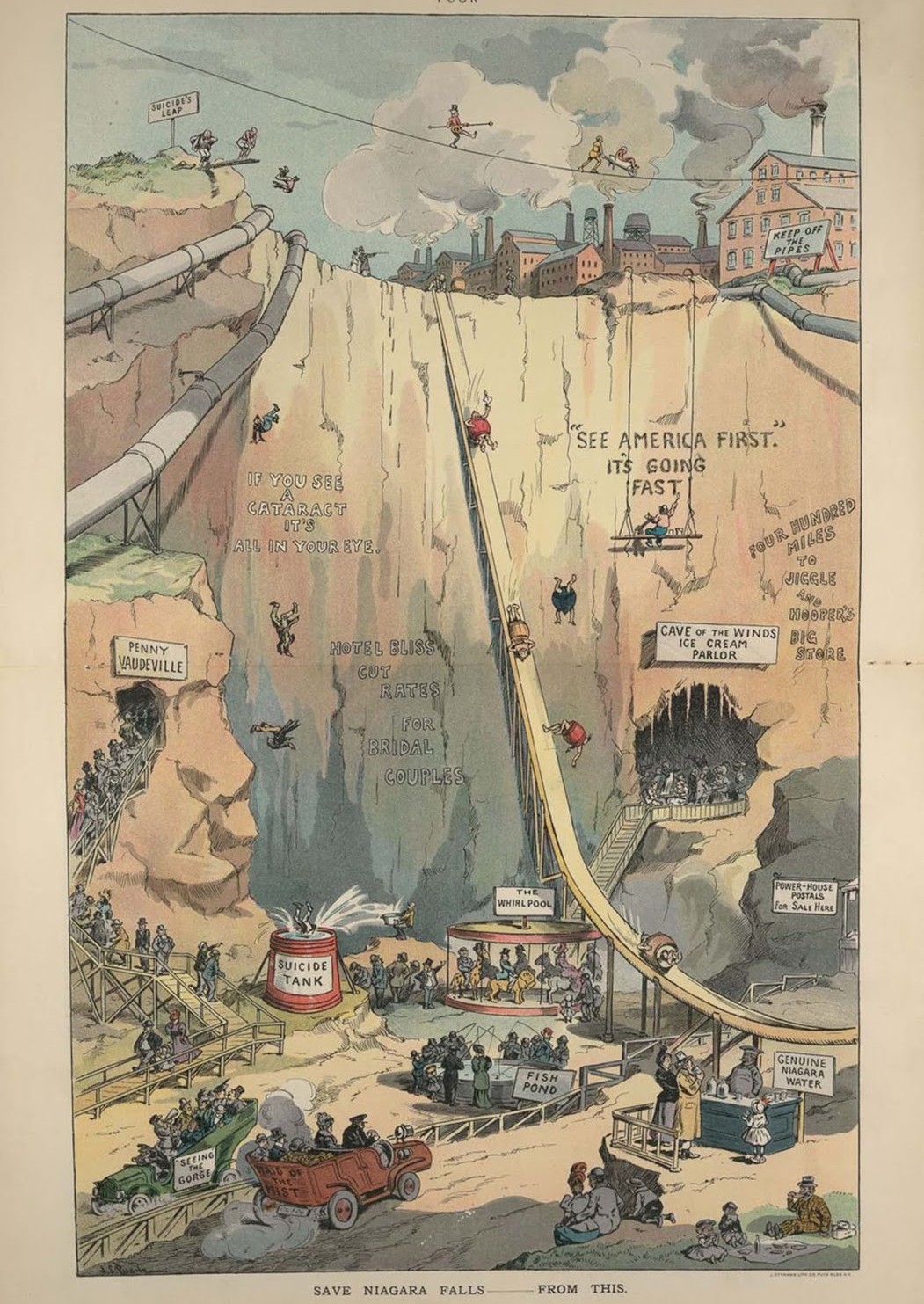 A satirical Puck illustration imagines the future of Niagara Falls and barrel jumps. 1906.

The reason why the daughter of the wealthy flour mill owner, an ordinary school teacher in such elderly age, decided to jump from one the highest falls in America is the need for money. She used a special barrel, designed by herself made of oak and steel, with stripes and mattress inside. Before her jump, she tried it for strength by putting the cat inside. Cat survived and later posed with her for a photo.

On October 24, 1901, on her 63rd birthday, Annie Taylor put herself in a barrel, her friends pumped some air and clogged up the hole. The barrel was launched on the American coast; the Niagara flow carried it to the Horseshoe Falls on the Canadian side. The whole ride took 20 minutes. After landing, the barrel was immediately pulled out, but it took a lot of time before the barrel could be opened. The only trauma was the head wound.

Later Taylor said: “If it were with my dying breath, I would caution anyone against attempting the feat… I would sooner walk up to the mouth of a cannon, knowing it was going to blow me to pieces than make another trip over the Fall.” 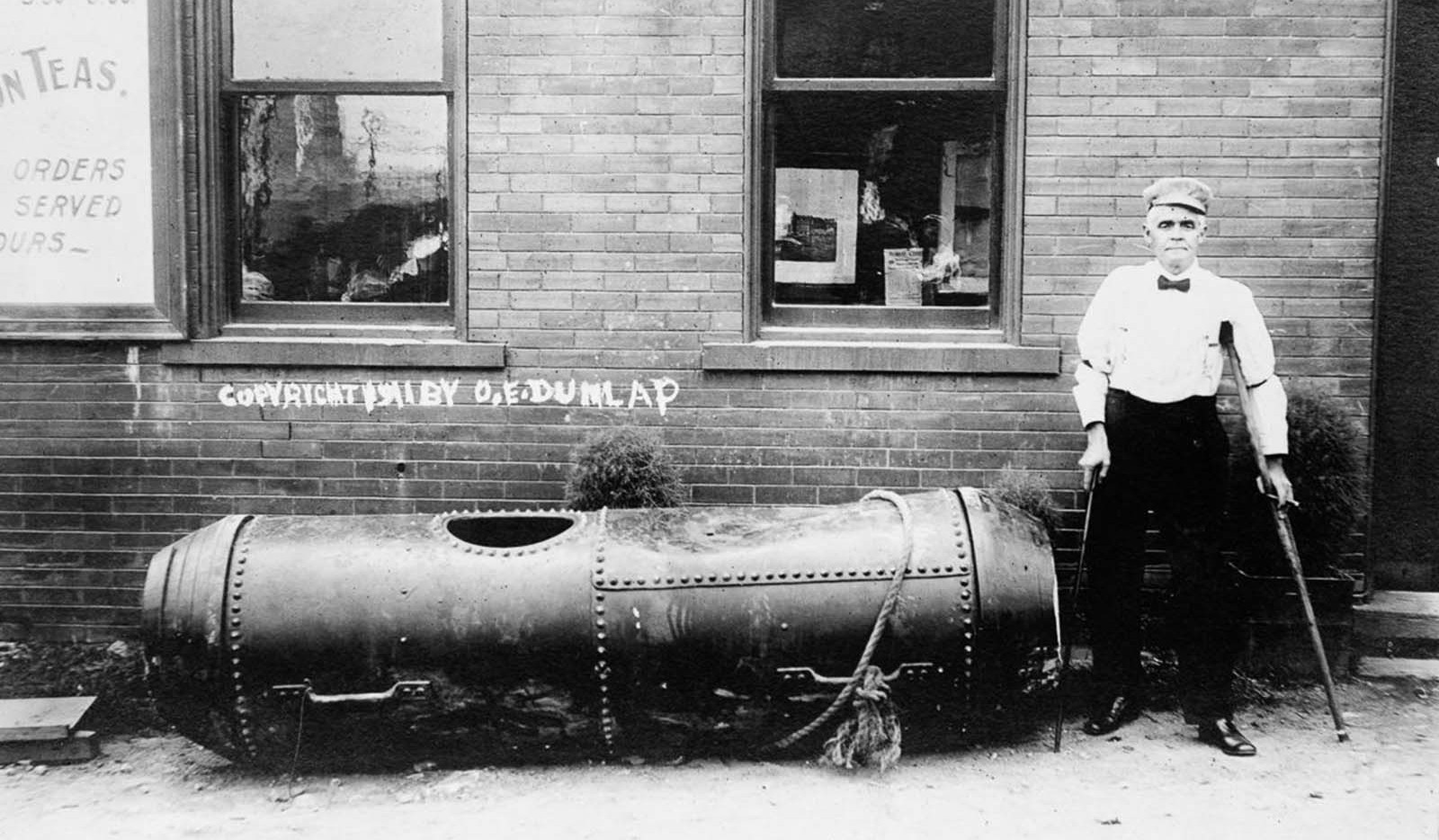 Bobby Leach, the second person to survive a jump over the Niagara falls, with the barrel he used to do it. 1911.

The next person who survived after going down the Niagara Falls was  Bobby Leach. His jump in 1920 was not so lucky: he severely damaged his knees and chew. But his background as a circus performer helped him to use the fame of the first man to survive going over Niagara in the barrel. He successfully performed in vaudeville venues and lecture halls of Canada, the USA, and Great Britain. Later he tried to swim across Niagara Falls but failed. Leach ended his life in 1926 from gangrene after slipping on an orange peel.

The first man who died during the jump over the falls was the father of 11, Charles Stephens, or Demon Barber of Bedminster. As previous daredevils, he was in need, so he found the stunt a “cool commercial proposition”. He used an anvil as ballast, and it crushed the barrel on the bottom of the Horseshoe Falls. The body was lost, except his right arm, which was buried in the cemetery. 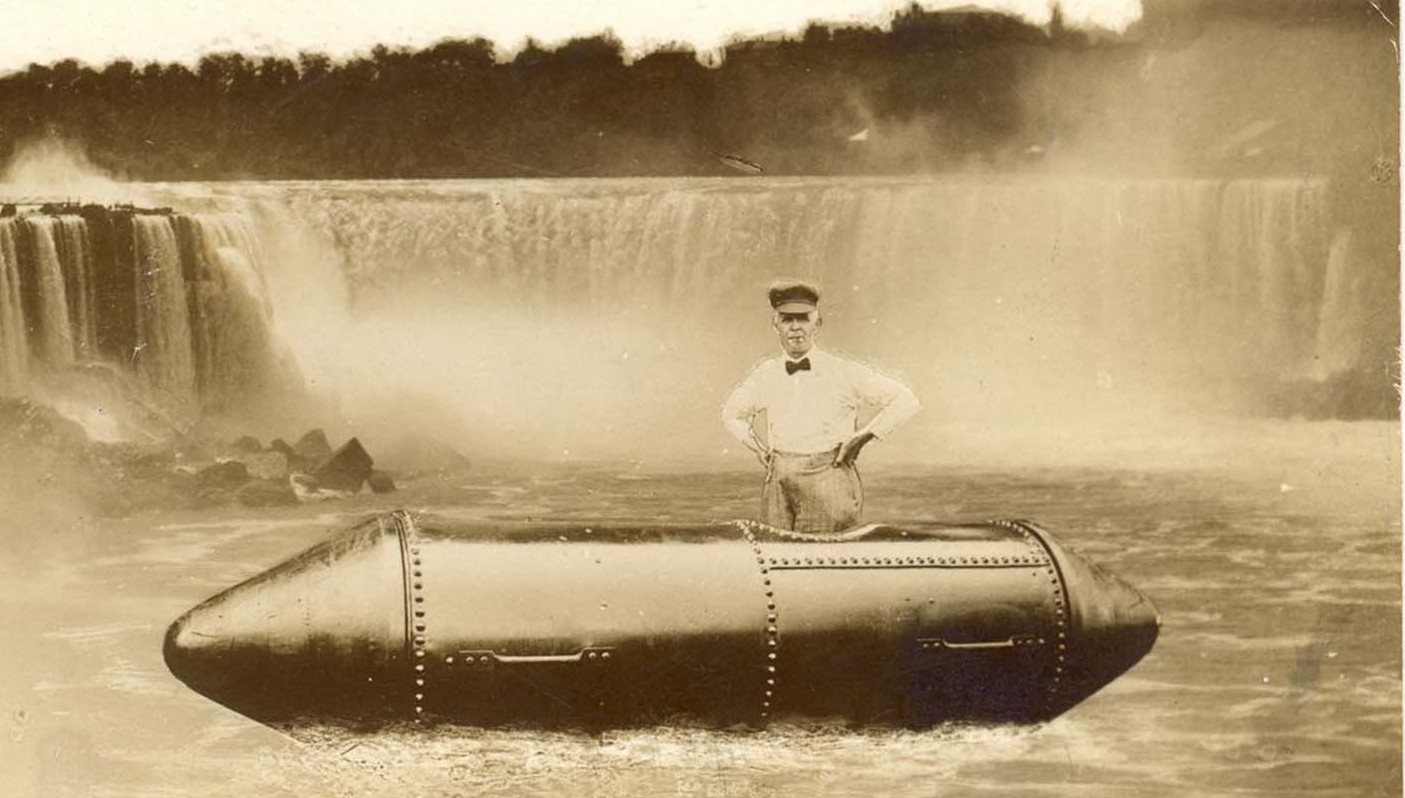 A photo composite of Bobby Leach and his barrel in front of the falls. 1911.

Next daredevil of Niagara falls, Jean Lussier, inspired by Charles Stephens’ story, decided to try to go over Horseshoe Falls in the rubber ball instead of the barrel. The diameter of the ball was 1.82m, had reservoirs with air, and a system of balance. The ball was smashed, but Lussier survived with few minor bruises. He sold the pieces of the ball, and when they were sold out, he used an old rubber from the nearest store.

George L. Strathakis, the Greek immigrant, built the most massive barrel at that time to protect himself. Trying to earn money for the publication of his book, he decided to use the construction of Charles Stephens with several constructive improvements. On July 5, 1930, the barrel successfully passed the Horseshoe Falls, but the daredevil didn’t survive. He built the barrel with the 8 hours capacity of air supply, but the weight of the stuff trapped it behind the fall for 22 hours. When the flow released the barrel, the lip opened, Strathakis had died of suffocation, only his 150 years old pet turtle Sonny Boy was alive. 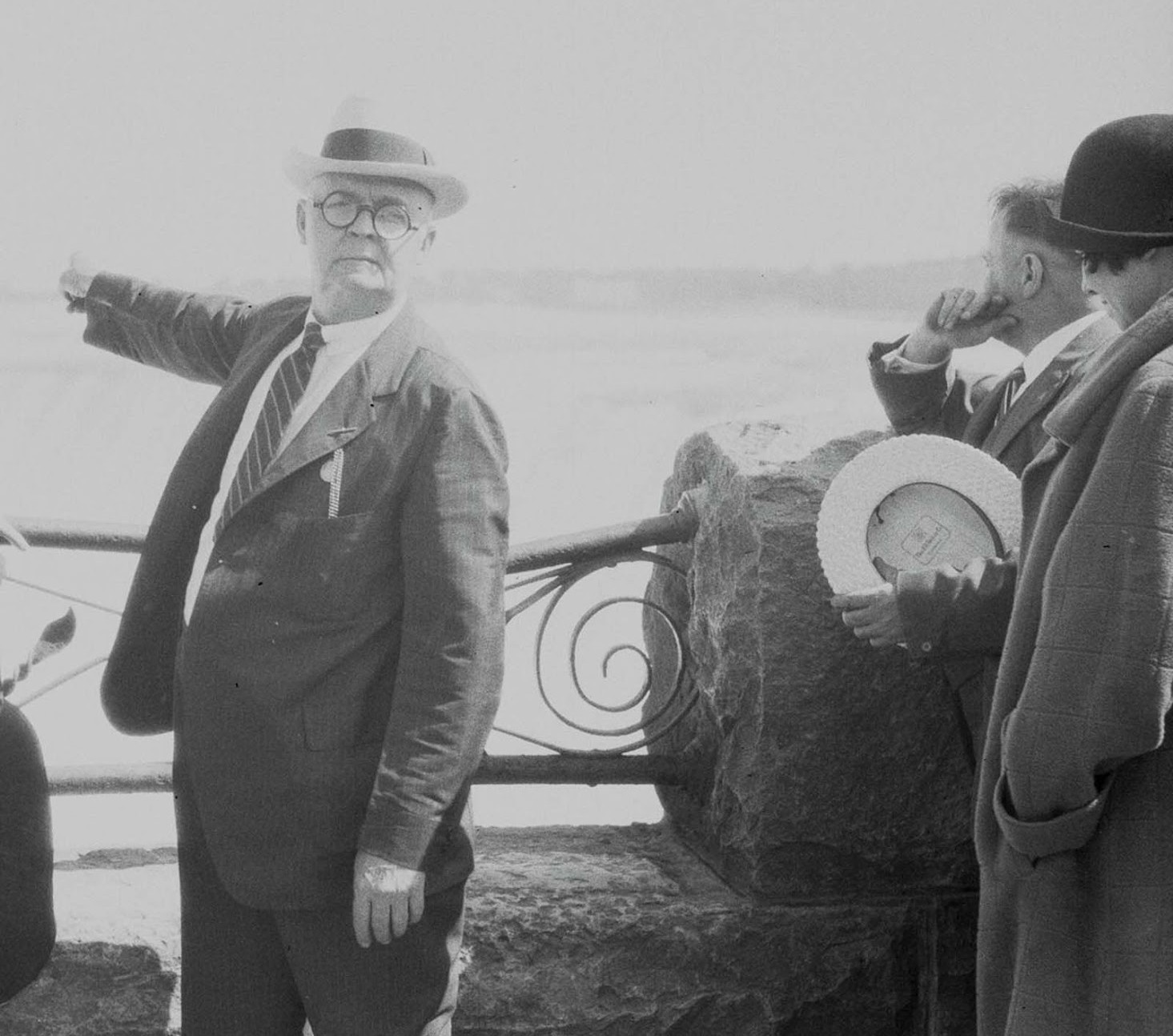 Since 1850, more than 6,000 people have died on the bottom of Niagara Falls. Each year 40 people die while swimming over the falls, but the statistics manipulated to hide the actual number of suicides who quit life in Niagara. Three-quarters of all jumps are on the Canadian Falls (they are higher). The rates of daredevil mortality are near 1:4.

The body of George Stathakis is retrieved from his one-ton barrel after going over the falls and becoming trapped for more than 18 hours. 1930.

Red Hill Jr. with his father’s 780-pound steel barrel, which he took through the rapids below the falls. 1945. 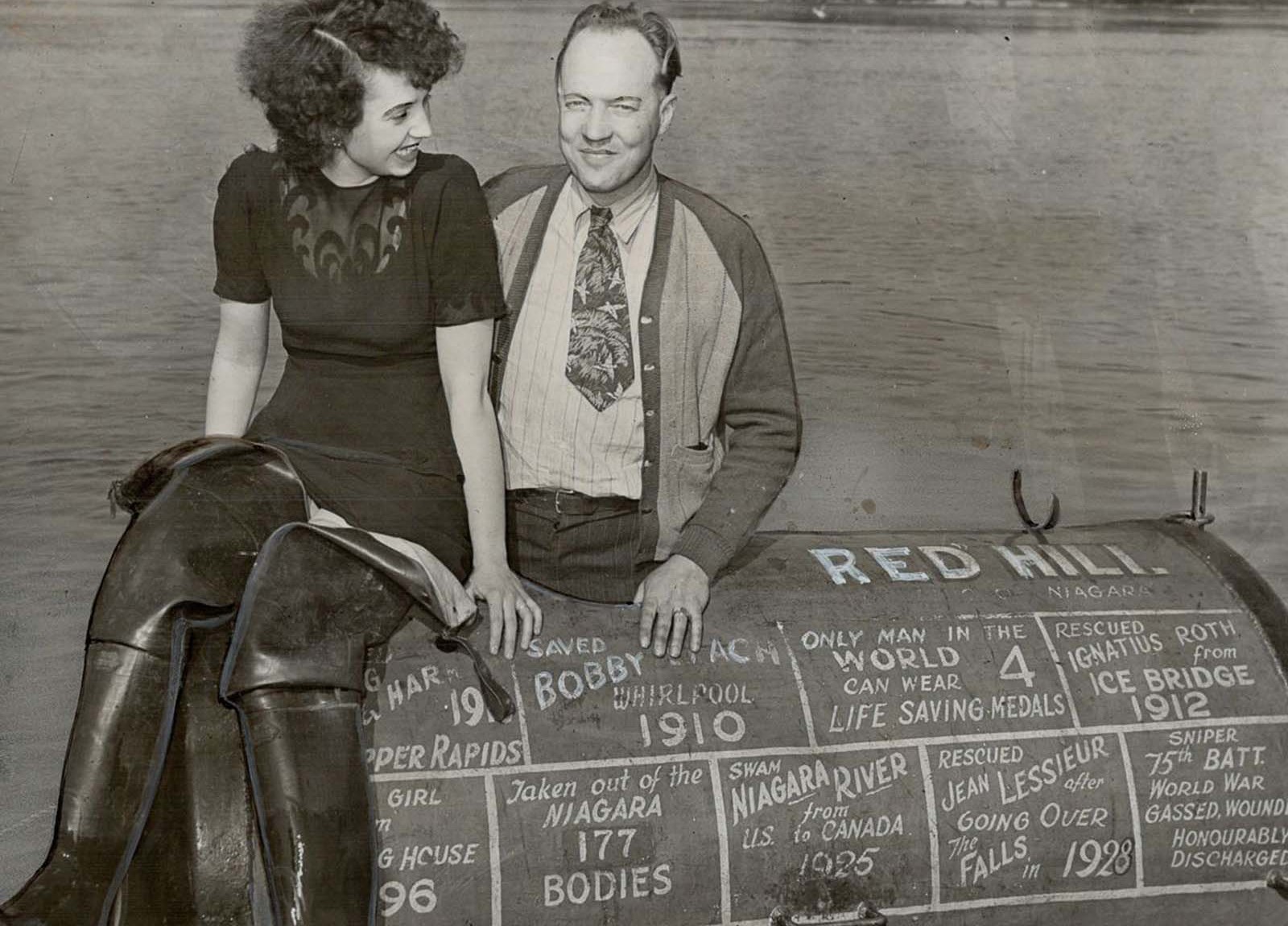 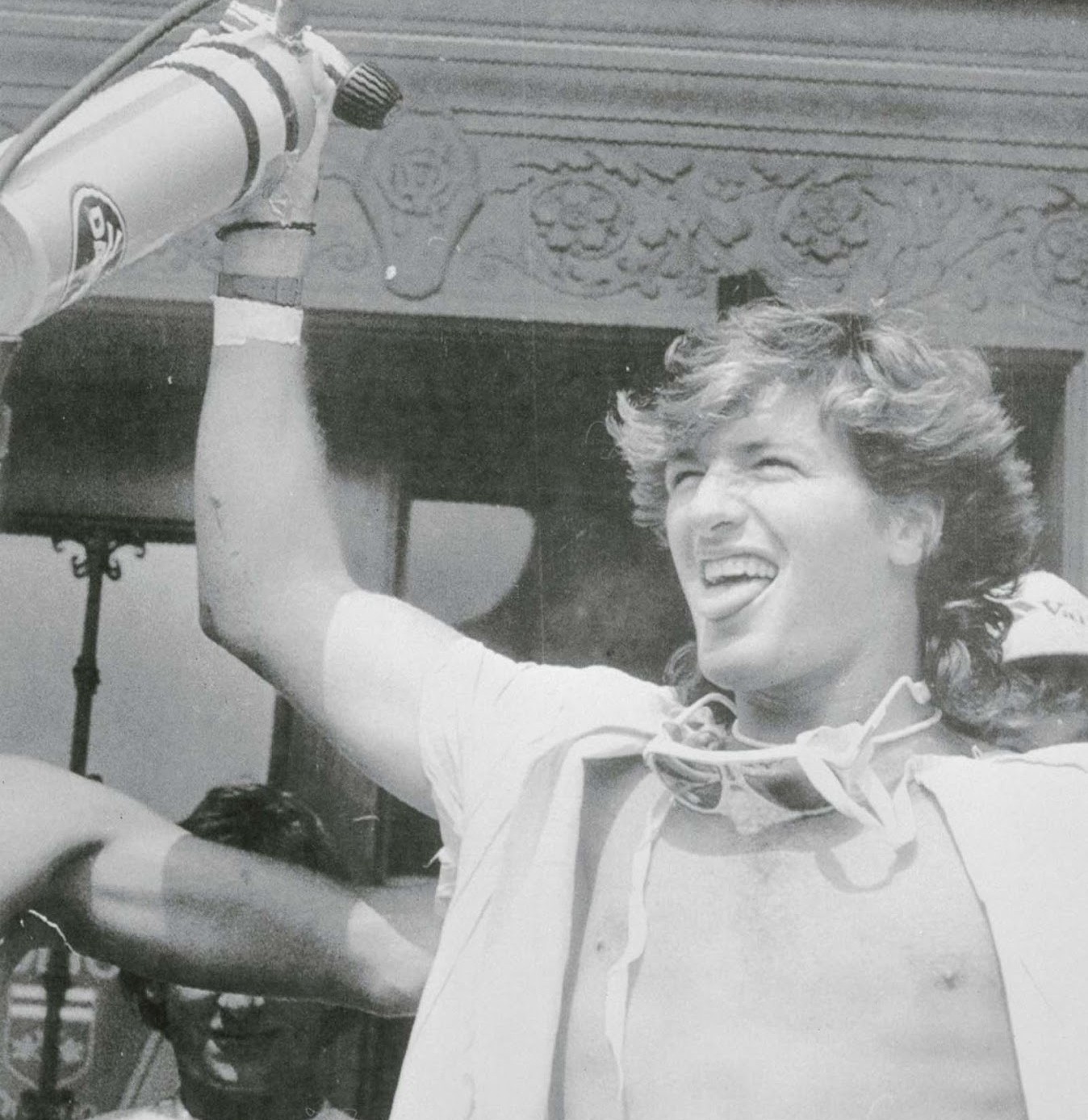 Extremal Steven Trotter demonstrates one of the oxygen tank balloons he took with him over the falls. 1985.