A story of the ‘Migrant Mother’ photo by Dorothea Lange 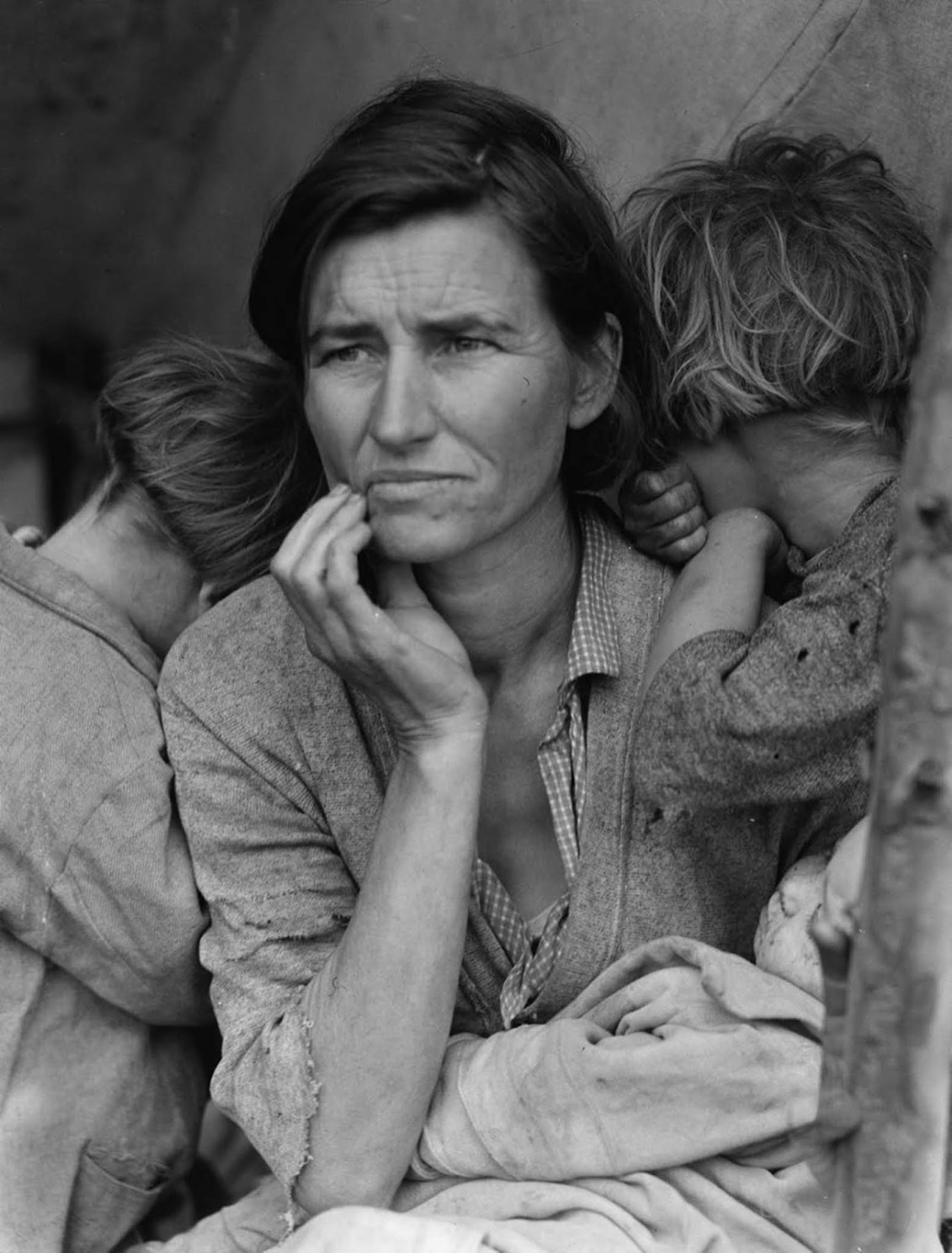 ‘Migrant Mother’ is an iconic photo by Dorothea Lange, made during the Great Depression in March 1936. This image is treated like a photography equivalent of Mona Lisa as both pictures share the same enigmatic aura. The real name of the woman in this photo was unknown until 1978 when she wrote a letter to the Modesto Bee, the editor of the New York Times, expressing ‘her feeling of unfairness, as she was never compensated for the ‘Migrant Mother’ photo.

It was a day when the photo community found that Migrant Mother’s name is Florence Owens Thompson, and she is not a migrant at all. Instead, she shared the fact that she is a full-blooded Cherokee from Oklahoma. 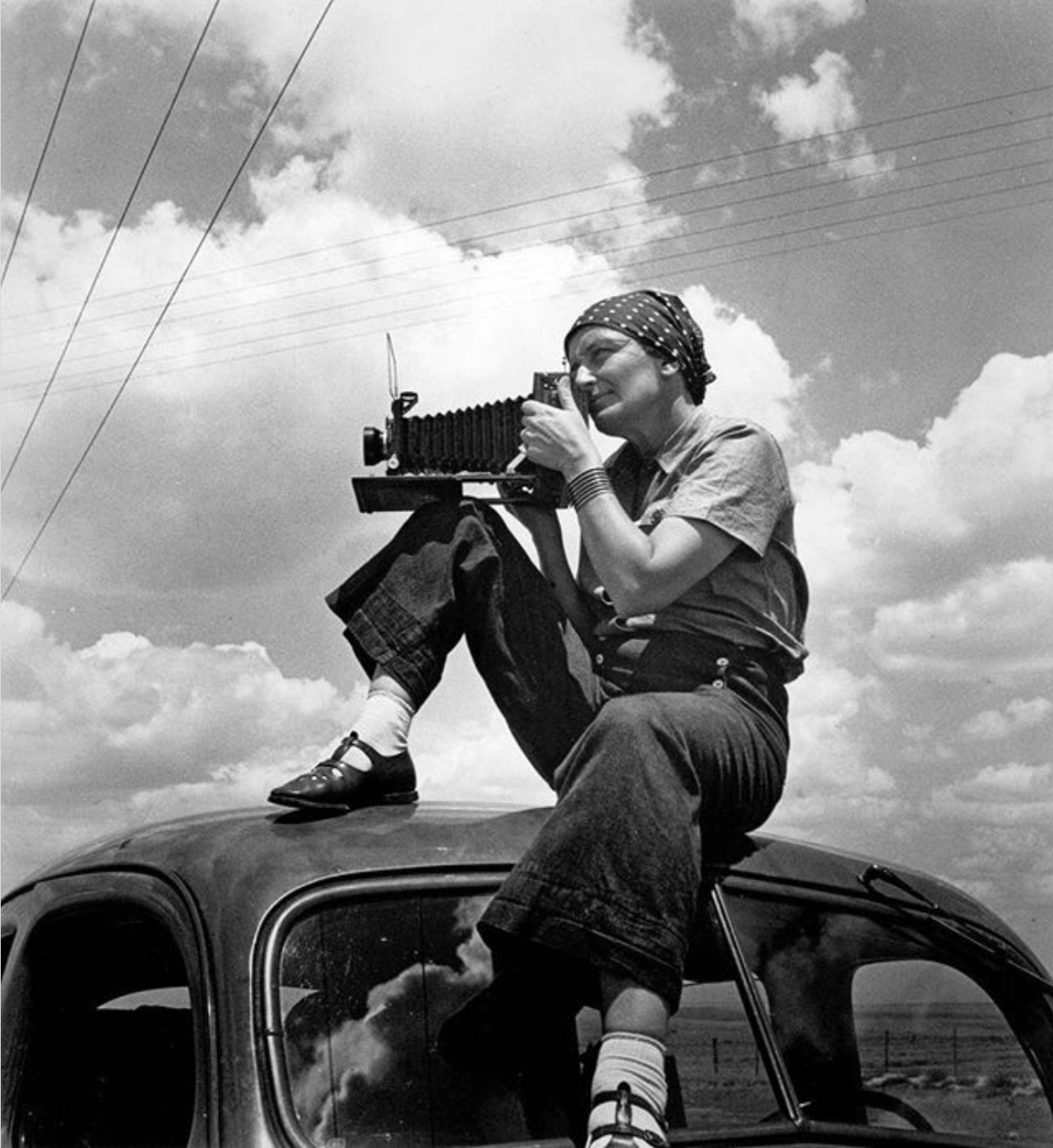 Dorothea Lange and her Graflex camera

When Dorothea Lange pressed the shutter on her 4×5 Graflex camera in March 1936, Mrs. Thomson was already a widow, mother of six. Her first husband died of tuberculosis several years ago, and alone, mother was struggling to feed her kids during the economic crisis of the 30s. ‘Migrant Mother’ expressed the grim life routine shared by many Americans of that decade. Historical conditions emphasized the perfectly captured shot, made this image an iconic one, the one in the list of the Top 100 most influential photos in history, according to Time magazine.

Dorothy Lange was practicing the photo portraits for the wealthy family archives in San Francisco since 1919. Still, the Great Depression changed her artistic focus to the homeless and unemployed people standing in the lines for bread. She joined the federal service that relocated families that were surviving the times of the Great Depression. The government wanted to show the conditions of life and work of relocated people to show that there’s nothing to afraid of and to bring the public support for government aid. Many photography experts compare her photo technique with Robert Frank’s Americans’, or even life-telling pictures by W. Eugene Smith.

Dorothea Lange had just accomplished her assignment and was on her way back to the Fed’s office with negatives; she decided she had to come back to check the worker’s camp. It was an exact place where she found Florence Thompson and her kids. “I was nearly crying when I met the hungry, exhausted, and desperate mother with seven hungry children in the tent as if drawn by a magnet,” she said. They were staying in the camp as they had been forced to sell their tires to buy food. 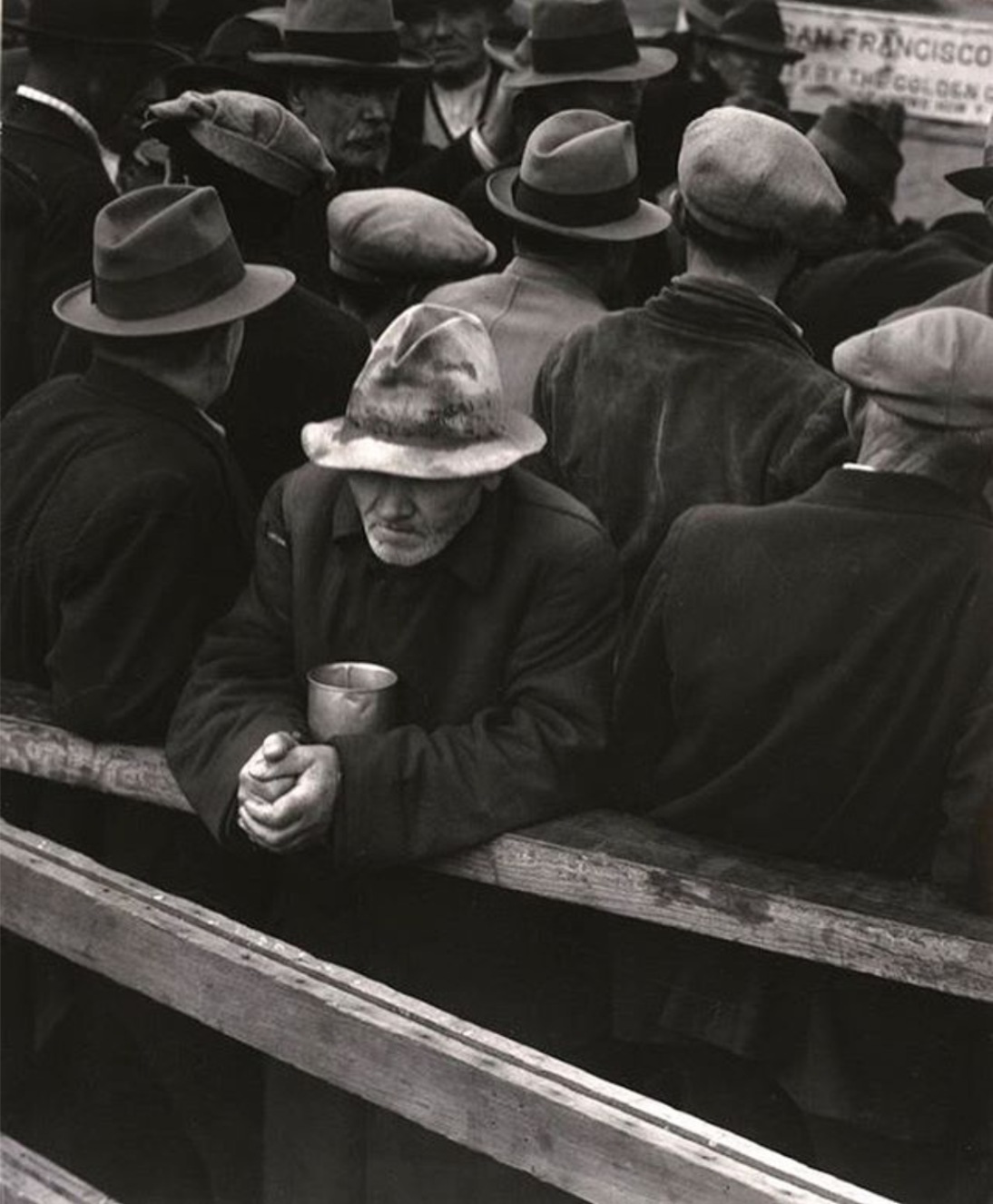 The Great Depression by Dorothea Lange

Florence was born in 1903 in Oklahoma, an Indian territory at that time. She married Cleo Owens when she was 17, and followed him to California as his family relocated there. Cleo died in 1931 when Florence was pregnant with their sixth child. Mrs.Owens was living a pitiful homeless life-on-wheels for almost five years when Dorothea Lange  found them.

No one knows why Dorothea Lange presented an image of Florence Owens Thompson as a ‘Migrant mother.’ Troy, a son of Florence, later said that he doesn’t believe the Lange lied intentionally, just some memories mixed after her long photo trip. 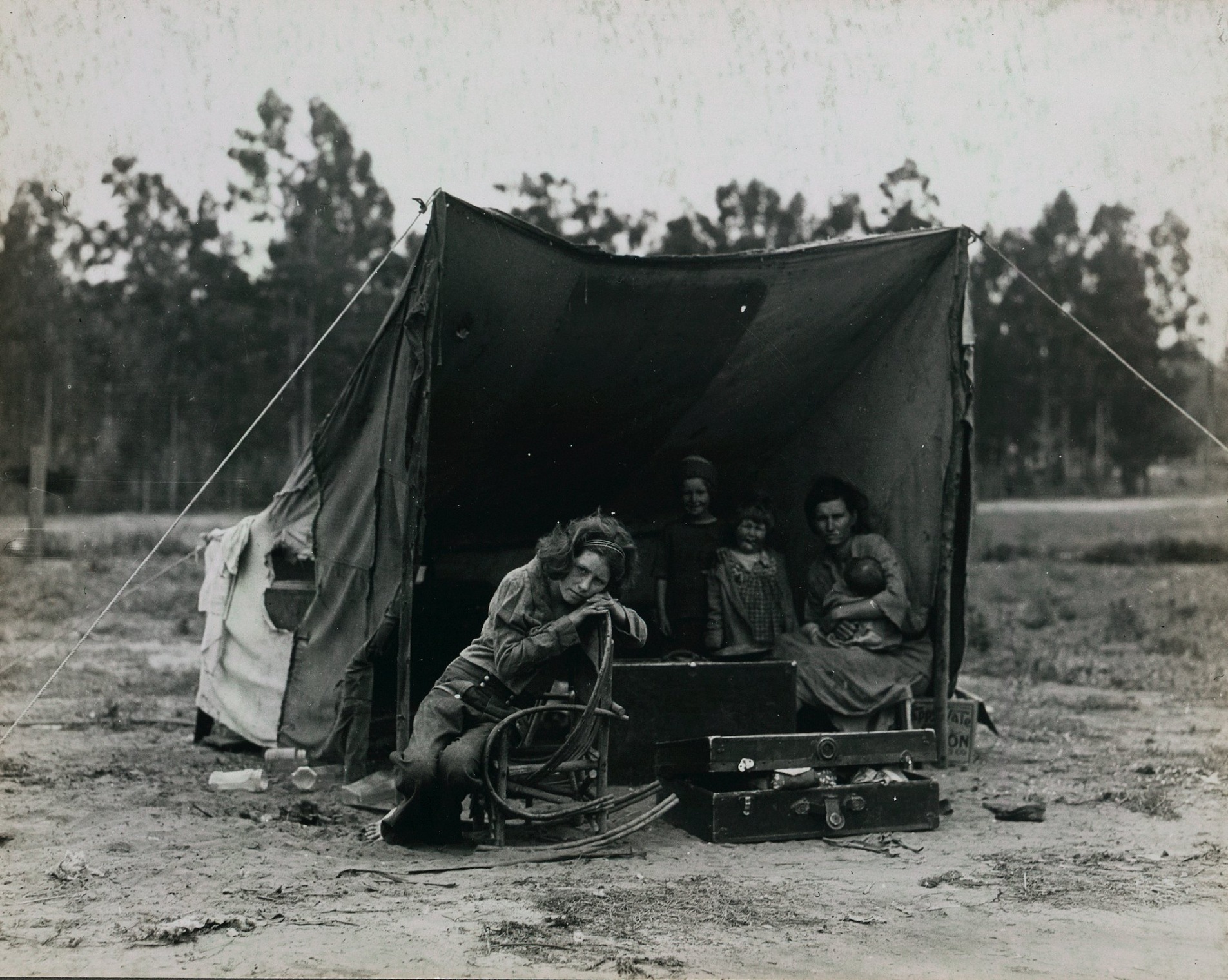 The tent of Florence Owens and her kids

The story of the photoshoot

Dorothy Lange pressed a shutter on her camera just six times. She didn’t have any new film as she recalled, and was very unfortunate. But sometimes even six shots are enough to make the greatest one. Images look like staged ones, but neither Lange nor Florence or her children remember that photographer orchestrated the composition. But it seems like she did. Dorothy probably talked to them, excluded the older girl, thus putting a bit less attention on children and focusing on a woman instead. The idea was to underline an unfortunate situation in the life of the average American woman. 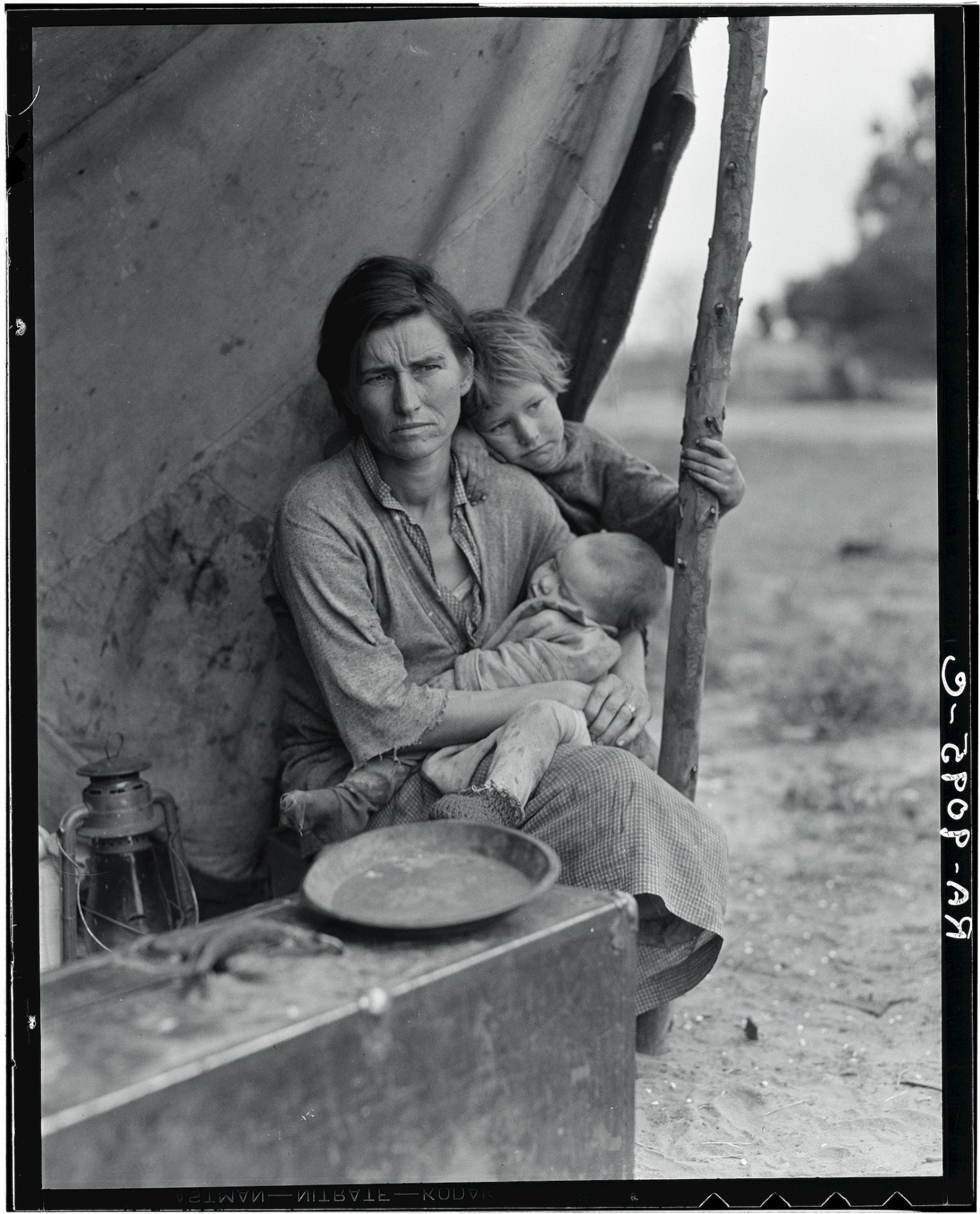 A Migrant Mother with an empty plate

In the next shot, Lange put an empty plate before the family. An ABC-approach to express the feeling of the moment. And the last chance was the one she wanted. Dorothy focused on the mother’s expression; kids are looking backward, Florence’s hand is pointing to her face – Lange used this move often when she was practicing portraits in San Francisco.

We don’t know what woman on photo is thinking about. An uncertain future of her kids is the first thing coming to mind. But what makes this picture stand out when we compare it to the rest from the series is not what is included in the frame but rather what isn’t. We don’t know where the mother or children are looking or what is or isn’t there. All we see is the expression, and the rest of the story is created in our imagination. 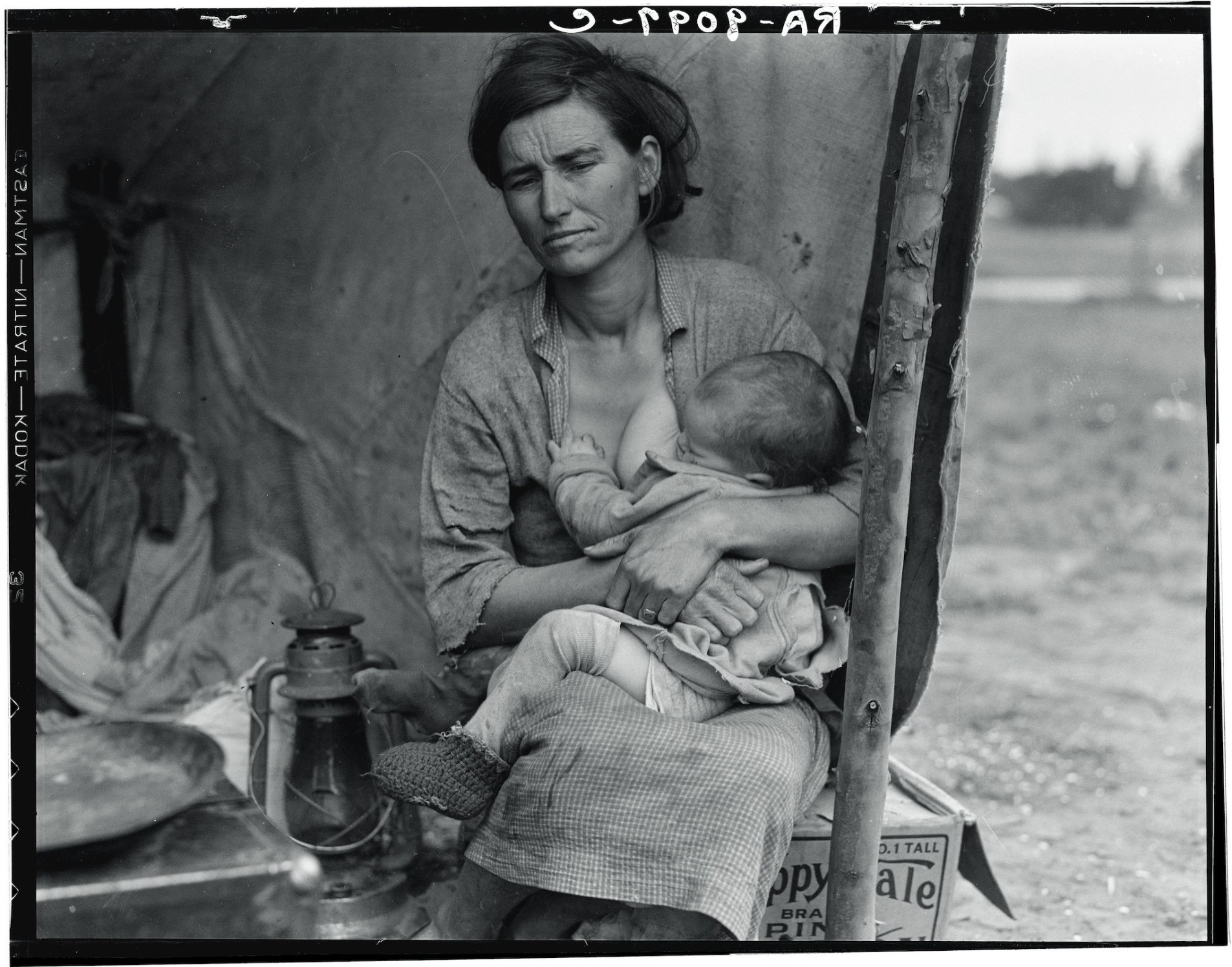 Florence Owens Thompson, a migrant agricultural worker, with her children in Nipomo, Calif., in March 1936 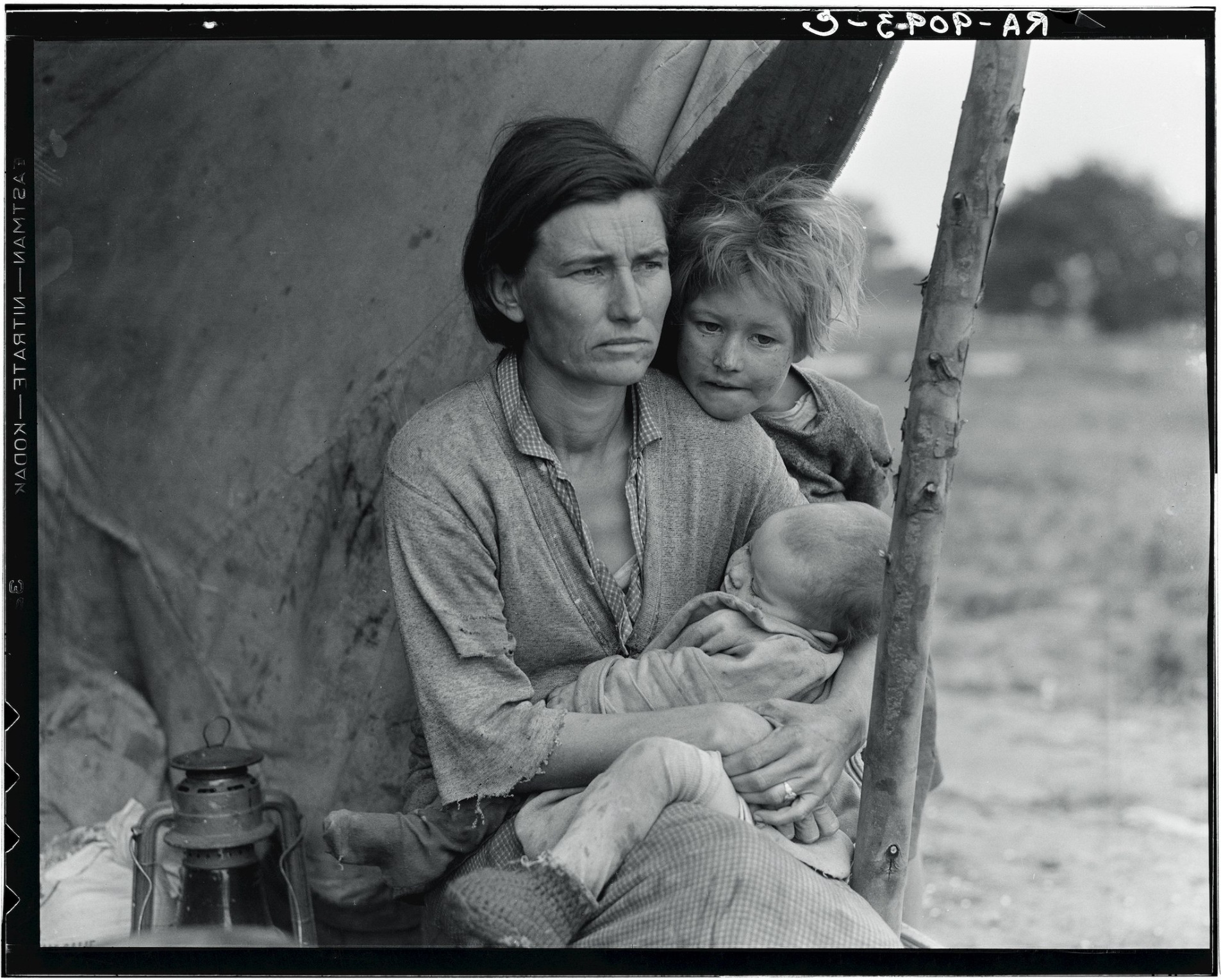