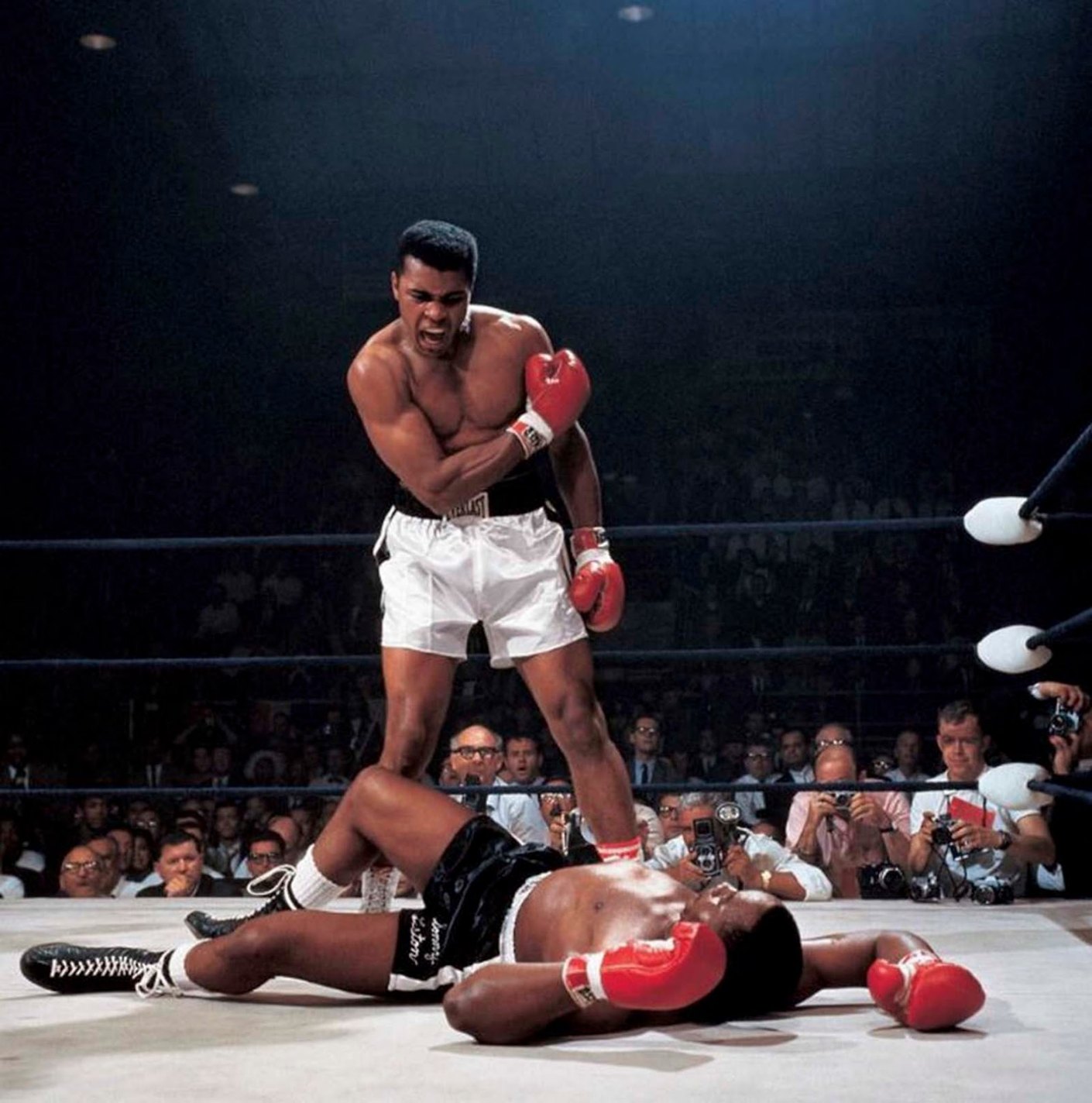 By that moment, Neil Leifer photographed the fight of Ali vs. Liston. His sports pictures had already deserved significant popularity. But he, of course, couldn’t know that on that day he’ll take a photo that will become sports classics, and take its place among the Top 100 most influential images in history.

The uncertain end of the first  Muhammad Ali and Sonny Liston fight raised the question of the possible criminal manipulations. And this factor added made that boxing night even more intriguing.

The rematch was postponed by six months because of Ali’s emergency operation of the strangulated hernia.

Ali vs. Liston: big fight in a small town

The Massachusetts State Athletic Commission refused to authorize the fight of Ali and Liston, and organizers looked for a new place. The young mayor of Lewiston, Maine, proposed a fight to take place in his small town, with a population of 41,000. It became the most modest location in history to fight for the world heavyweight title since 1923.

Ali’s connection with the “Nation of Islam” and the presence of its members in the team created a weighty atmosphere around the event.

On the evening of the match, visitors didn’t fille the small arena of The Androscoggin Bank Colisée: only 4200 spectators were present in the hall, while it could accommodate 4800. Bookmakers’ bets were 9 to 5 in favor of Liston.

The fight itself was very short: Ali knocked out the opponent in less than two minutes after the start of the battle. After a powerful hit, later called “phantom punch,” Liston collapsed onto the ring floor. Ali refused to go to the neutral corner, bending over Liston, he cried out:

“Get up and fight, sucker!” “Nobody will believe this!”

Liston spent 17 seconds on the floor with no chance to stand up firmly.

On the records of that fight, you can see that Ali held his striking pose less than a second – this was the moment when Neil Leifer pressed the shutter.

The classics of sports photography

Let’s leave the boxers aside and concentrate attention on the other quick-strike: the camera one.

Neil Leifer wasn’t new in sports photography, neither in photographing Ali. That day fortune was on the side of Leifer: he set on the right place on the short distance to capture the rage face expression when Ali screamed over a defeated competitor, as well as the postures of both fighters. Ramp lights and cigar smoke created a studio-like effect. Someone could even think that photographer staged this photo if the moment wasn’t captured by another photo- and video cameras.

Leifer later said, “I was obviously in the right seat, but what matters is I didn’t miss. That’s what separates best sports photographers from the ones that are just good — you have to get lucky in sports photography.”

That day Neil Leifer took three lucky frames: side view on the fight just before the “phantom punch,” Ali standing over Liston, and “fish-eye” from the top of the ring right in the moment of Liston’s knockout (during the next few seconds after previous). The zest of these pictures is that they are all in color – only two photographers brought color cameras that day.

The posture of Ali holding his hand in a 90-degree angle also became iconic. Sportsmen, actors, bodybuilders, and even Ali himself repeated this scene during numerous photo sessions. But that moment was extraordinary: the boxers, the timing, the background full of disappointed photographers.

Interesting fact: Leifer followed Ali’s career, they even appear in the same photo in 1966: genius boxer and genius sports photographer. Both became successful in their careers: Leifer worked for Time and People magazines and even tried to become an independent filmmaker.