The race riots of 1919 are the bloodiest page in the history of Chicago, and our pictures set shows the high tensions of that summer days. The whole story started up with one black boy crossing the borders of the white district. White kids accidentally murdered the intruder and caused the chain reaction of protests, looting, and disorders. The segregation was a sure thing of Chicago of the early 1900s, and Afro-Americans had no other option but to surprise against the racism. Chicago riots didn’t put an end to the racism in the city itself or the northern states overall. The segregation was here and there until the 70s or even later. Civil rights movement had to cover the historical pass that will take another 40 years.

Some pictures show the horrible scenes of dead body removals (Chicago riots of 1919 resulted in 38 deaths and 500 injuries). Other photos captured the policemen and national state guards that tried to bring order to the streets. Some pictures are just rare snapshots of Chicago’s dwellers who attempted to survive the chaos of the civil protests. 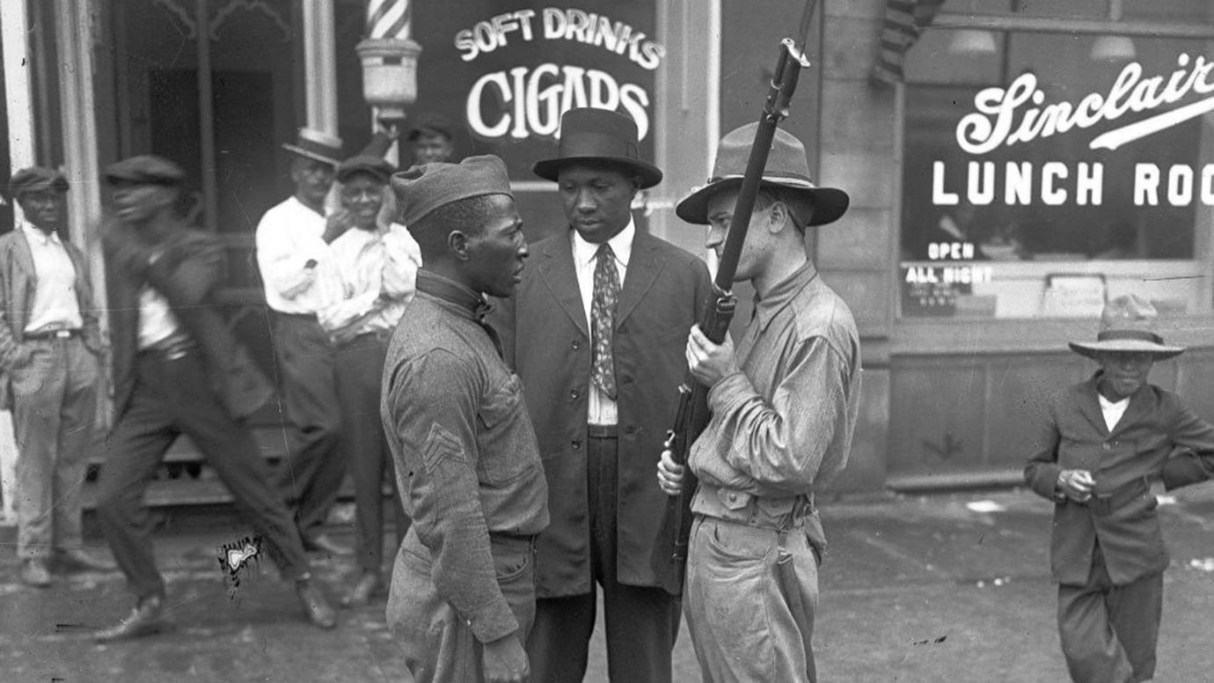 Chicago entered the 20th century with a variety of hostile factions. More than 1,300 gangs roamed across the city, taking control of the whole districts. Those gangs were organized ethnically. Some of the bands had funny names that refuted their harshness: One Italian squad called itself the Onions, while a black one was known as the Twigglies. 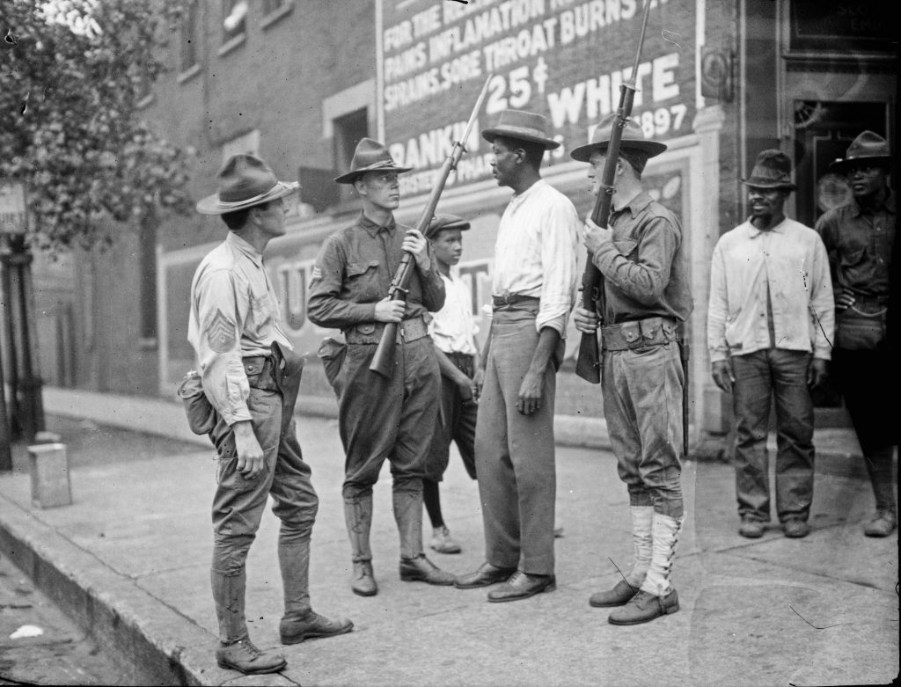 After WWI, the blacks who overflowed to Chicago for jobs at the start of the Great Migration, very soon they met the job limitations favoring returning white veterans. During the first half of 1919, the number of employed blacks fell from 65,000 to 50,000, igniting the future protest. The grim pictures of the Chicago riots: police remove the dead body of the black man. It all started in July, at 29th Street beach. The murder led to a riot that lasted for seven days. On the second day, white men, women, and children waited outside the Union Stock Yard with switchblades and baseball bats to assault black workers and even disabled streetcars, so the occupants had no choice but to wade into the mob. 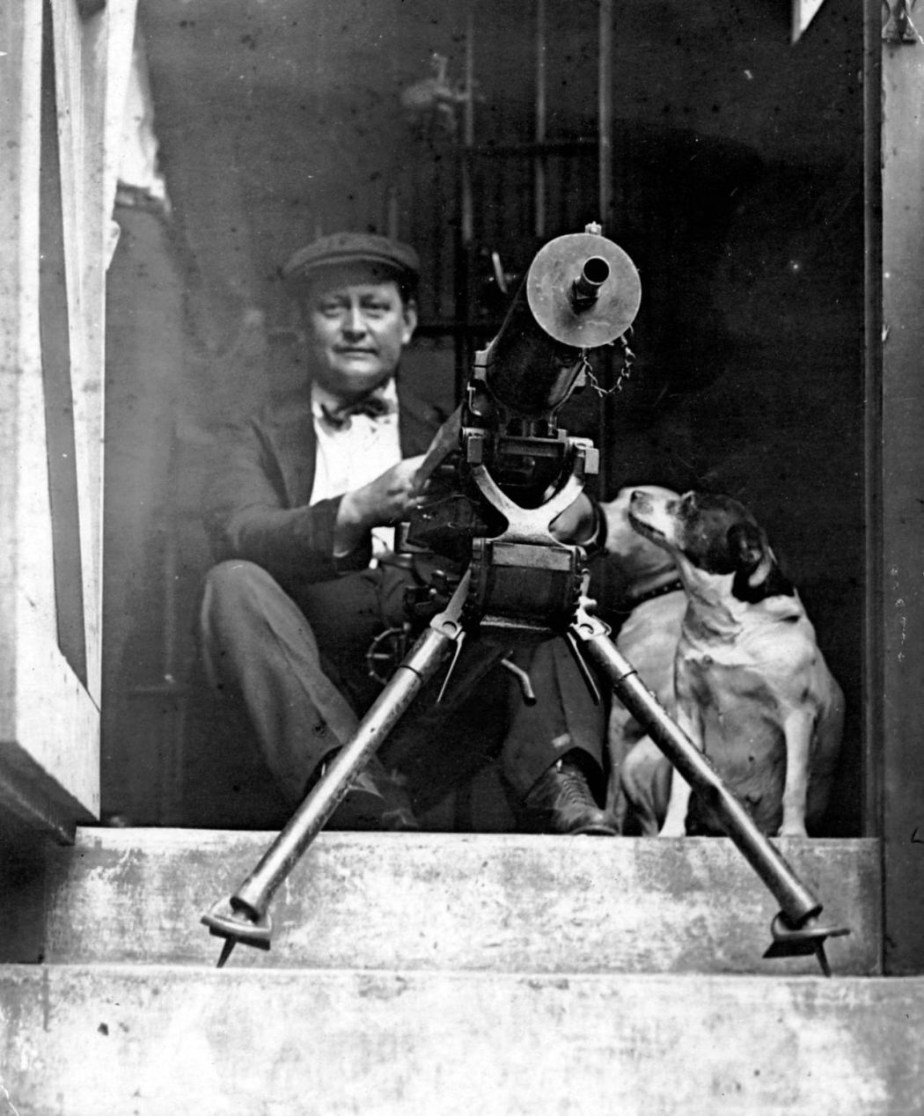 Rumors fed the chaos; aggression fueled the hostility. A pack of black men crowded the Angelus, one of the few all-white apartment buildings in the Black Belt, after a gossip that a white person had shot a black boy from a window. Police examined the house but didn’t spot any suspects. Unsatisfied with the investigation, someone in the crowd threw a brick at one of the cops. The police fired back, killing four. 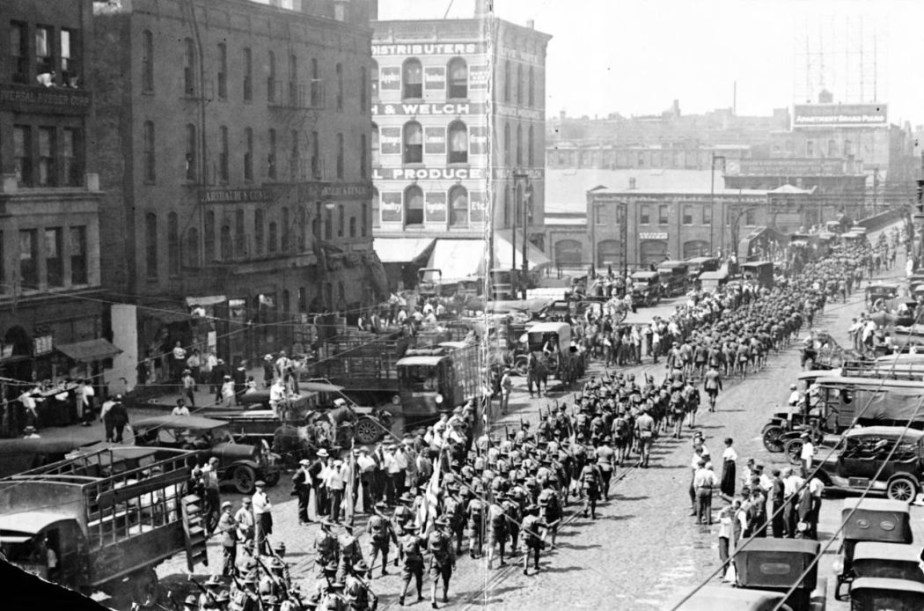 The riots reached its climax when Lithuanian homes near the stockyards were set on fire. White gang members in blackface committed the attack to fuel the loathing of blacks. The Lithuanians didn’t fall for it, though, and the riot ended—but not before 38 people were dead and 537 wounded. 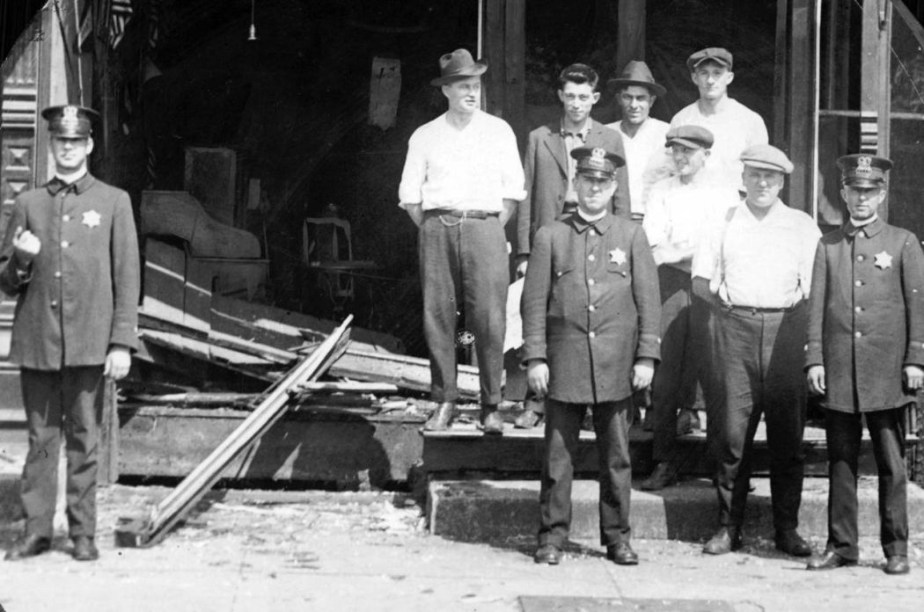 The Zvonirnir Club at 2903 Wentworth Avenue after the civil disorders. 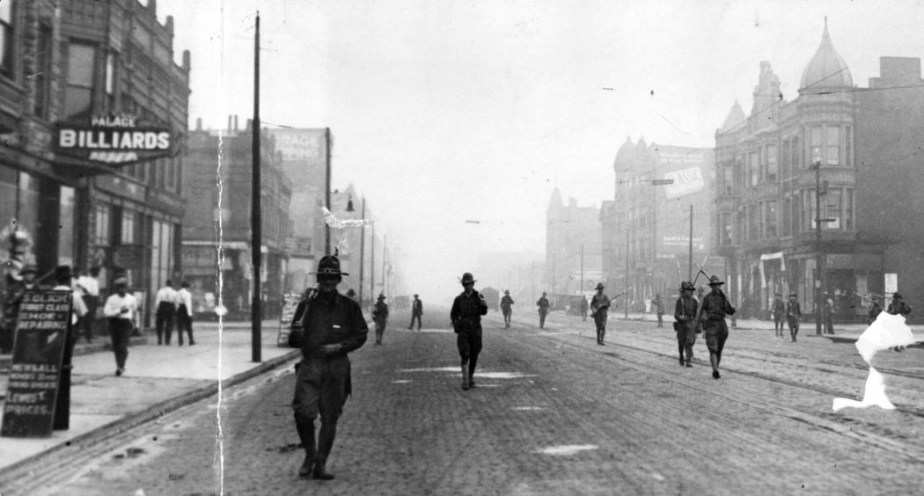 The mounted policemen escort  African-Americans to a safety zone. 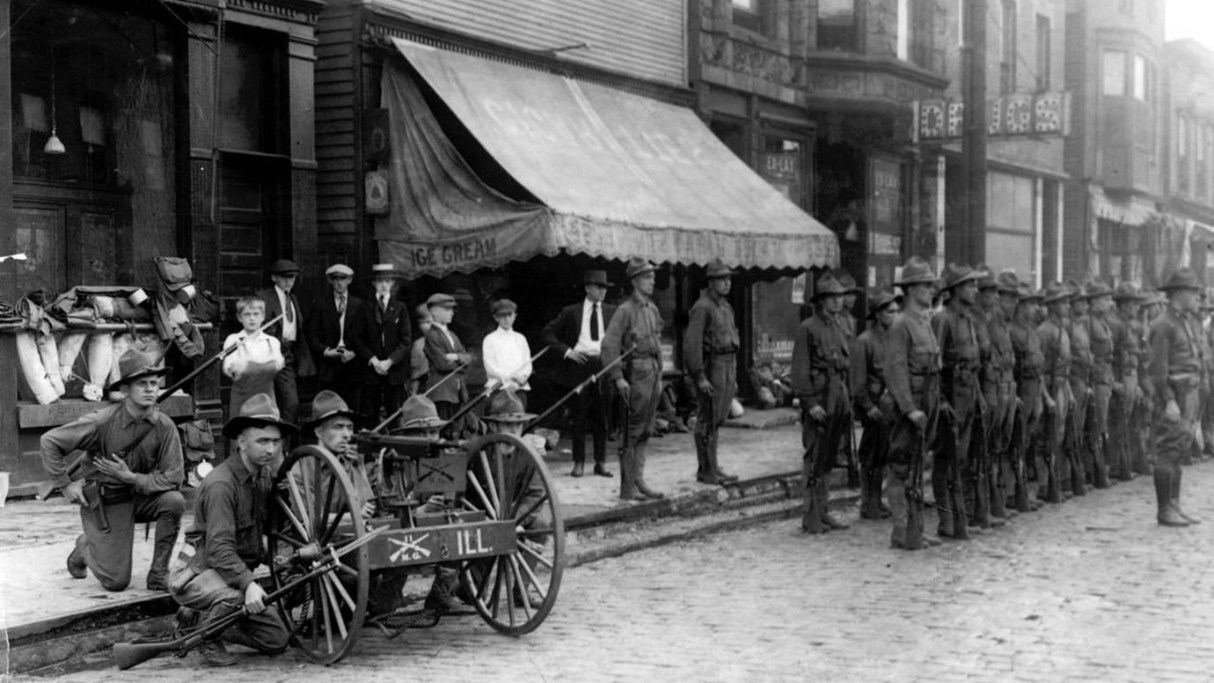 State militia troops gather at 47th Street and Wentworth Avenue during the riots. Soldiers from the state militia talk with a man during the Chicago race riots of 1919. 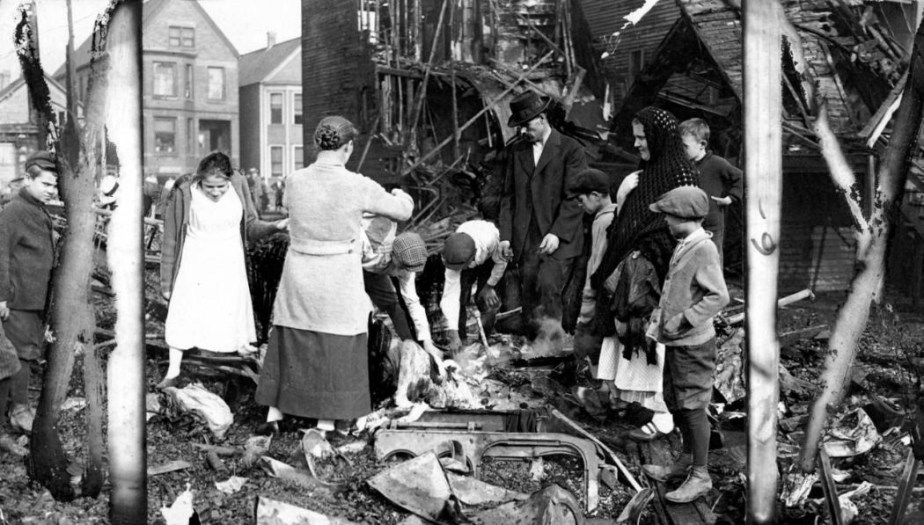 Locals look over the remains of a ruined house in the Stock Yards neighborhood. 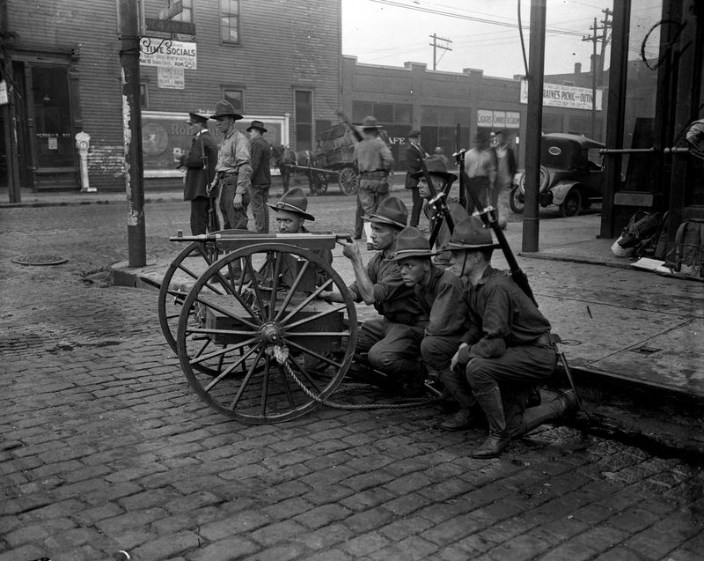 National Guardsmen, also referred to as the state militia, keep the peace at the corner of 47th Street and Wentworth Avenue during the 1919 race riots in Chicago.

Heavily armed motorcycle and foot police officers stood at the ready for instant transportation to quell the rioting on Chicago’s south side on July 30, 1919 Crowds gather at 36th and State Streets, the center of the riot area, during the 1919 Chicago race riots. 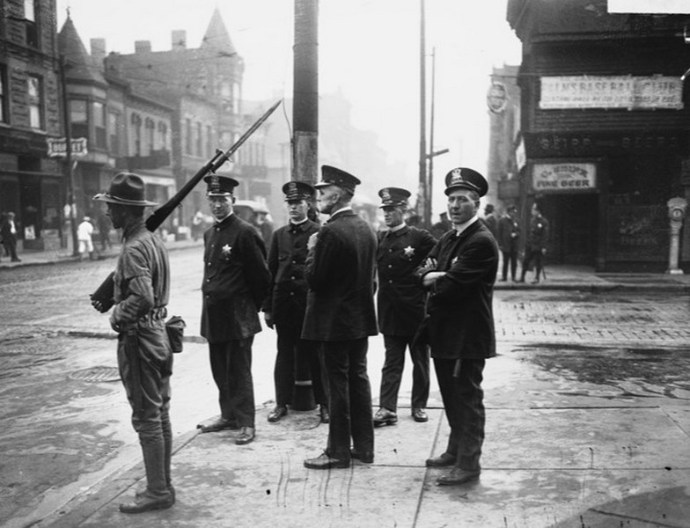 Chicago police officers and a soldier of the Illinois National Guard on a South Side street corner during the 1919 riots. Army trucks loaded with troops are rushed to the Southside of Chicago to quell the race riot. The aftermath of a fire in the Back of the Yards neighborhood. The cold waters of the North Atlantic became a graveyard for many ships. One of them was the Italian liner, Andrea Doria….
Stories

Earle Bunker found himself among Pulitzer Prize winners in 1944 for his photo ‘Homecoming’. Here’s an interesting one: 1944 was a special…
Photo of a day

Frank Noel received a Pulitzer Prize for his ‘Water!’ photo in 1943. It was a second Pulitzer prize awarded in a Photography…
Subscribe
0 Comments
Inline Feedbacks
View all comments
×
Photo of a day