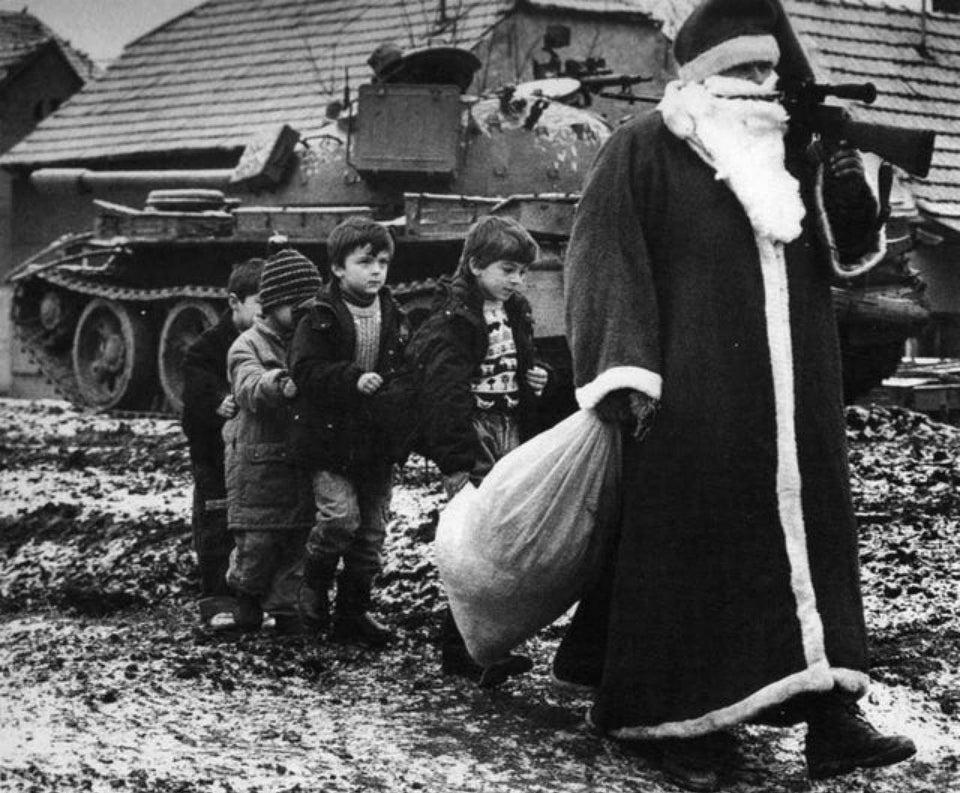 Santa Claus escorting kids to present them Christmas gifts in Vukovar, Croatia, during the Croatian War of Independence – 1992

This photo of Santa Claus in Croatia during its War of Independence may be the most bizarre and saddest Santa’s image ever made. While everyone knows that the wars stopped during the Olympics, the same rule should be applied to Christmas too.

This Santa Claus is an actual combatant who fought for the independence of Croatia. While he holds a real rifle in one hand, the other hand carries a sack with toys. Santa’s simple escorting kids to a safer place to present his gifts. Photographer captured this Christmas scene in 1992 when the first stage of the war in Croatia was over.

Overall, the Croatian War of Independence lasted from 1991 to 1995, with a cease-fire signed in 1992. Croatia blasted two major offensive operations in 1995, reclaimed all ethnically Croatian lands, and forced Serbia to recognize its independence.

While publishing this sad but valuable historical photo on Oldpics.net, we’d like to see Santa in much more positive life circumstances.

By Anna Ramirez
1 Mins read
Stay cool, the Flying baby is safe and sound; now she is about 30 years old. It’s amazing how some photos become…
Stories

By Andrew Piper
2 Mins read
We publish some interesting pictures of Russia from time to time, and this publication covers the 1990s. As usual, Oldpics selected some…
Photo of a day

By Andrew Piper
1 Mins read
Some people say that Great Britain stopped being an island after these drillers in the Eurotunnel met on December 1, 1990. This…
Subscribe
0 Comments
Inline Feedbacks
View all comments
×
Stories