Bathing machine of the Victorian Age in pictures 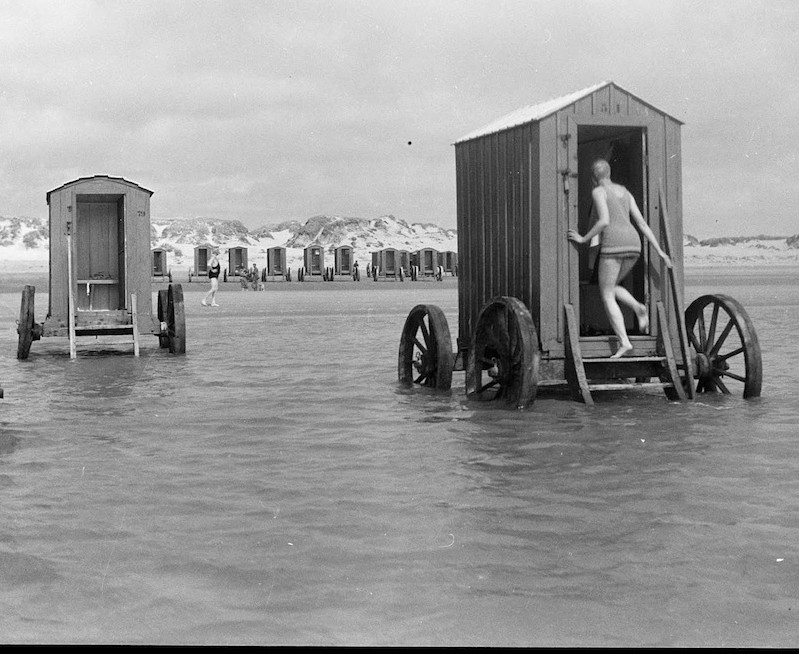 The Bathing machine was one of the craziest inventions that kept privacy during swimming. There was no other socially acceptable way of swimming during the centuries, including the Victorian Era.

The fact is that it was hardly possible to peel off your clothes at the beach in the 19th century (and before it). Here’s how the bathing machine was the only option if you’d like to swim.

An average bathing machine had a pretty primitive design. It was just a wooden booth with a hole in the floor. 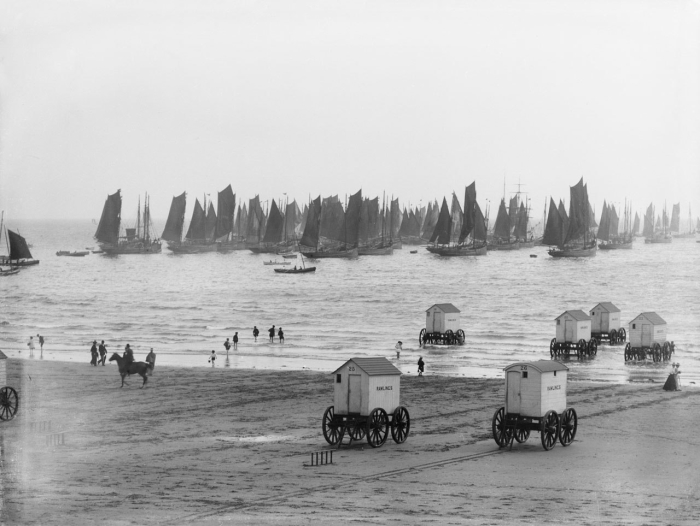 It’s good that in our time, you can simply swim in the sea and sunbathe on the beach without hesitation, but this was not always the case.

Horsepower of the bathing machine

Usually, people used horses to pull the bathing machine into and out of water. Interestingly, sometimes people even didn’t take off the cloths while swimming inside those booths. For example, women were bathing in long dresses, caps, shoes, and pantaloons. And that was the only way how Victorians could splash into a hole in the floor and bath. Otherwise, they had a risk to shock the recreational crowd with the sight of his bare hands. 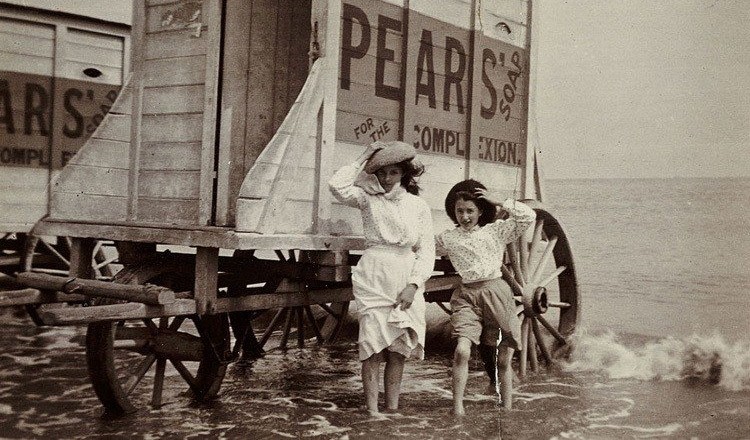 There was no place for feminism.

The social rules of swimming for females were way more strict. Now it sounds amazing, but in the 18th and 19th centuries, women could not easily put on a swimsuit and just sunbathe or swim on a public beach. It was considered as indecency to appear on the beach in a bathing suit. You had to obey these rules; there were no exceptions. So, the bathing machine was created to keep women’s exceptional dignity and modesty. 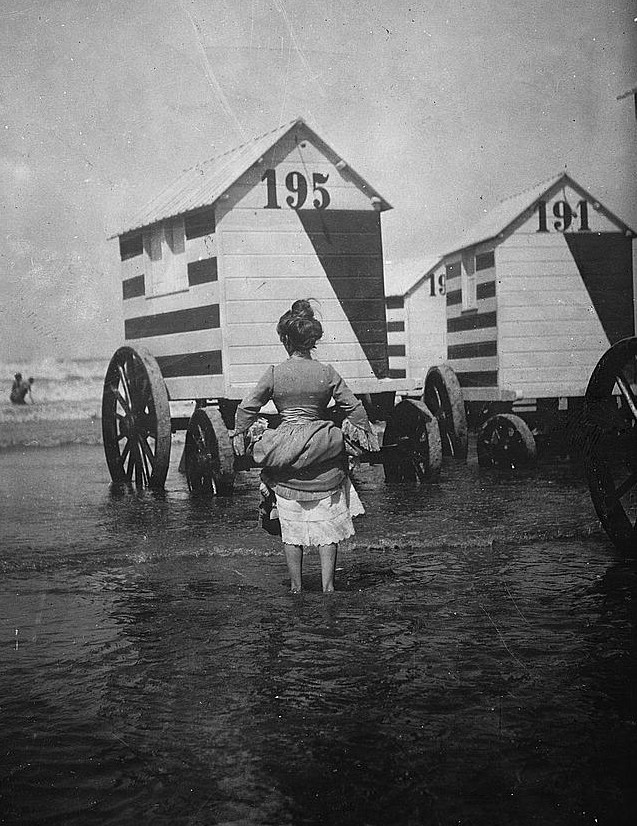 This woman dared to show her legs during the Victorian Era. Unbelievable

As soon as the booth was in the sea, the woman could safely go into it and change into a rather modest swimsuit. The bathing suit looked more like a slightly open stretch pajamas than a real swimsuit. Afterward, a woman could open a special door in the bathing machine and go down into the water away from people’s prying eyes on the beach. The upgraded bathing machines were equipped with special canvas tents that could be lowered directly into the water. This enhancement created an extra area for quiet and secluded bathing.

These women are testing the social limits by showing their legs on the beach.

Interesting fact: The first resorts appeared in Europe in the 18th century, and they brought the demand for the swimming suits. However, they were rather vaguely reminiscent of real swimwear. The first women’s “swimsuit” consisted of a long dress with a bodice, crinoline, and a closed collar, a cap on the head, fabric shoes, stockings, and underwear. Women had to tie metal weights to it, to prevent the hem of the dress from lifting during bathing. 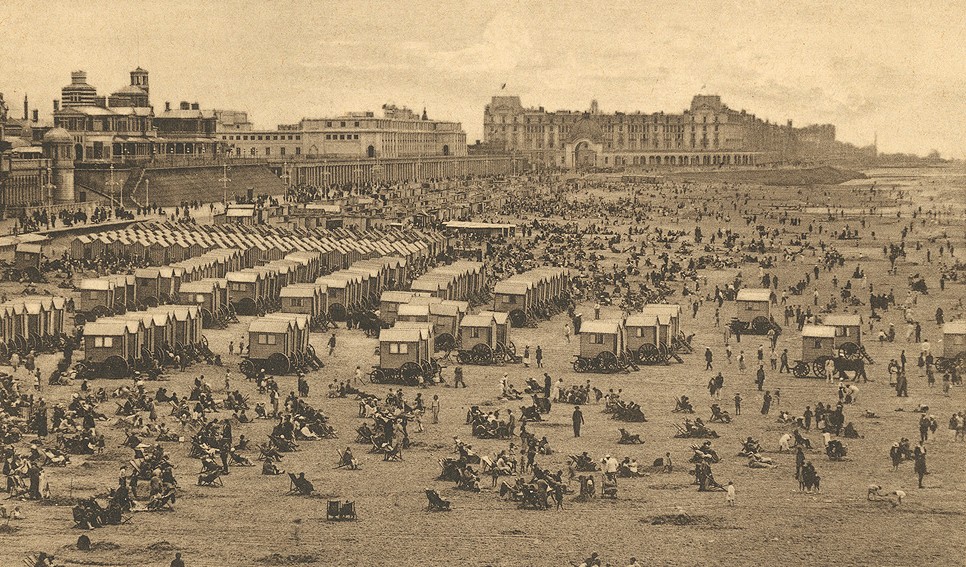 The beach crowded with Bathing machines 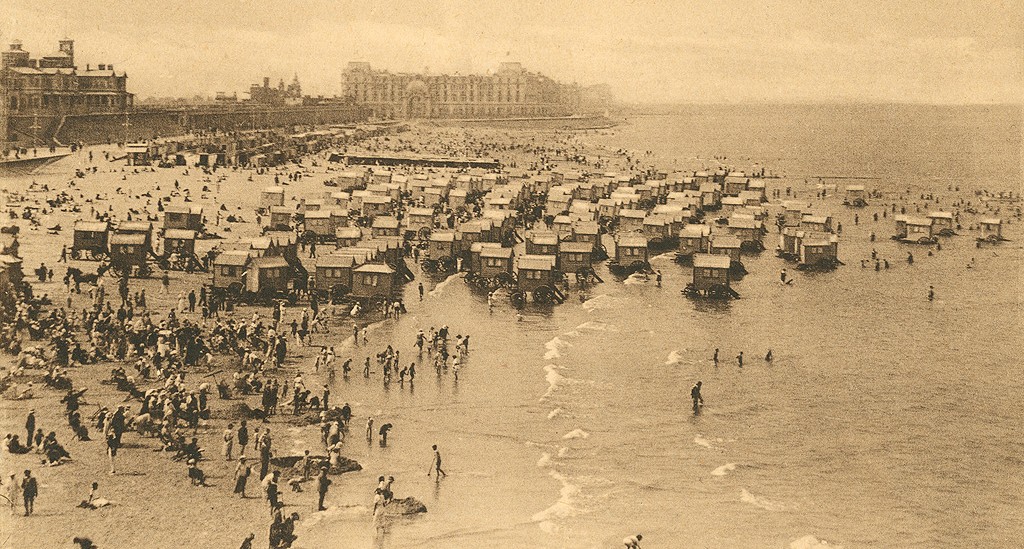 And now they go swimming

Swimming was never so… complicated.

Swimming in such an unusual way was quite problematic. That is why a special female assistant had to accompany the swimmer during the bathing. Her job was to help the noble lady get out of the bathing machine.

We also need to mention that many women did not know how to swim in the 19th century. Here’s why women tied themselves to the bathing machine with a rope.

The first bathing machines appeared in the UK. People started to use them in the 1750s and gradually spread to other countries: France, USA, Germany. 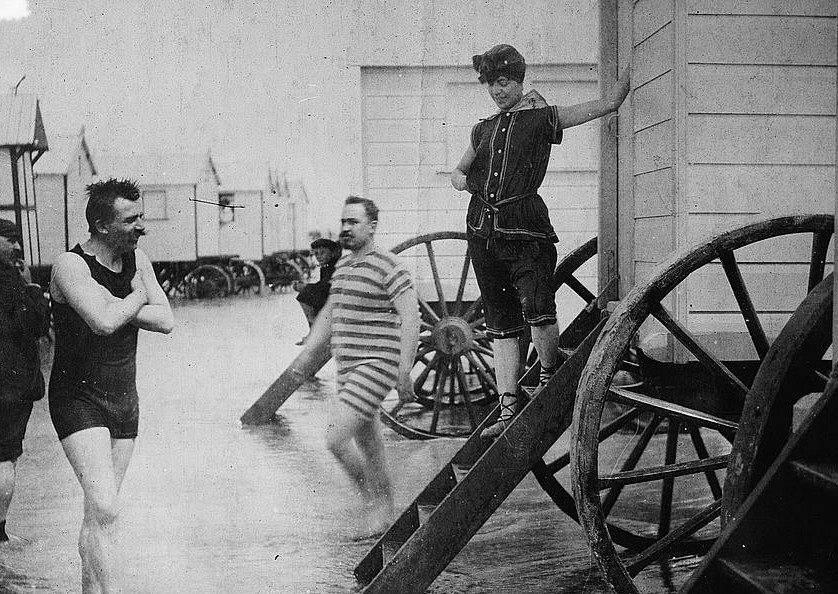 Swimmers between the Bathing machines

The end of the bathing machine

Social rules became milder at the beginning of the 20th century. Men and women even could use the same beach. Here’s why the bathing machine became completely irrelevant by the 1920s. Moreover, freedom reached its climax in Soviet Moscow in the 1920s, where nudism was allowed for a decade. Along with the bathing habits, the fashion for swimwear also changed. Swimsuits became more open and elegant, allowing women to transform them from a simple bathing suit into a special outfit that enhances beauty. 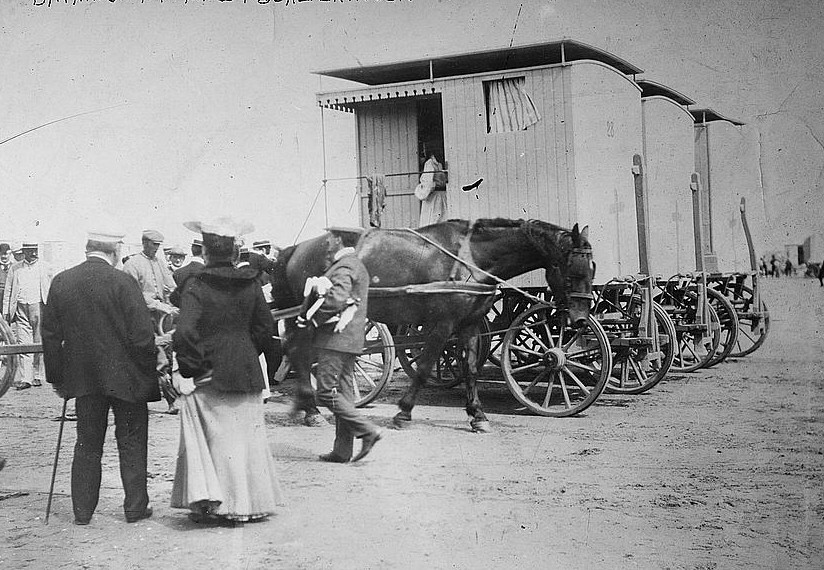 Horses pulled the machines out of water 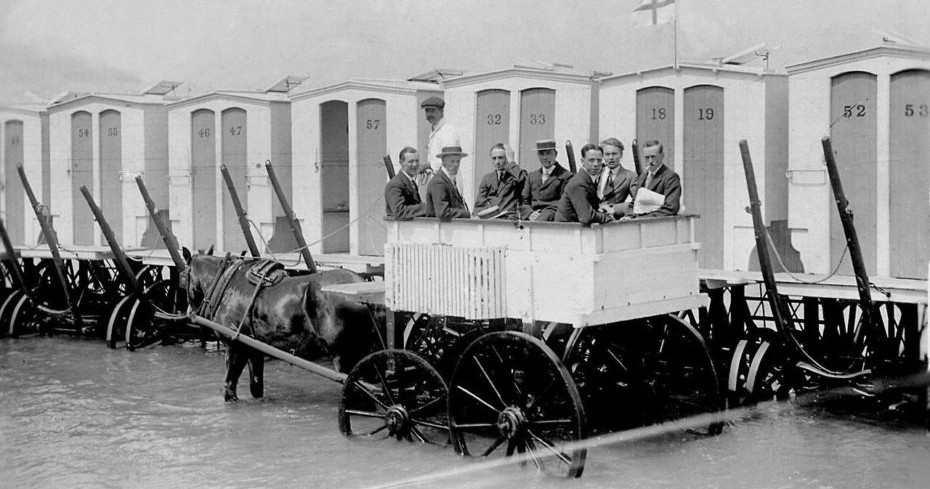 The gentlemen are going to swim 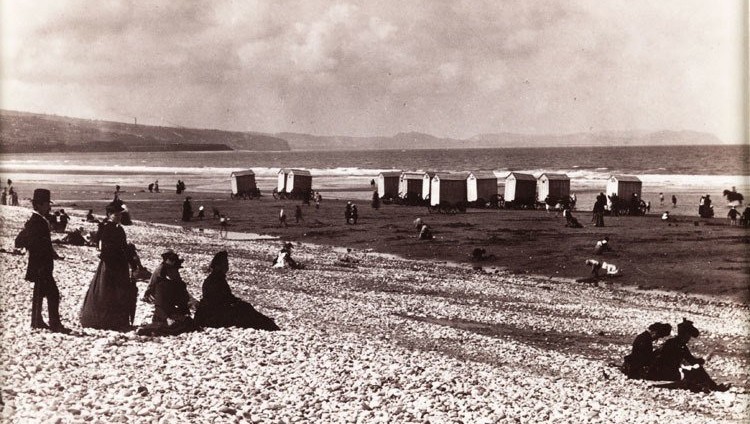 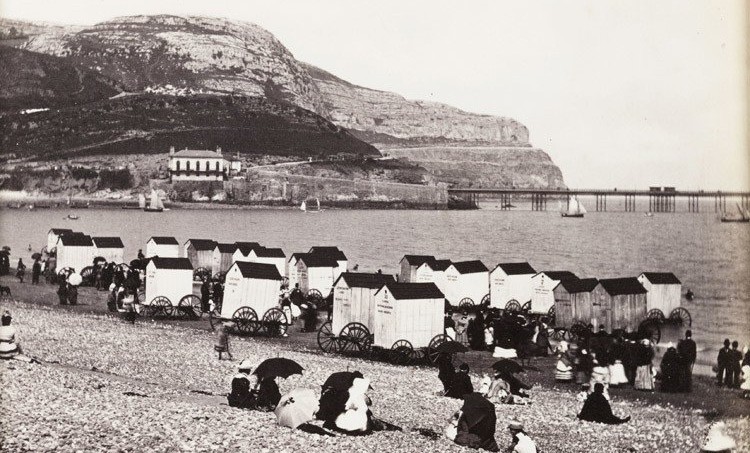 Bathing machines crowd the beach at Llandudno on the north coast of Wales. Photo: Getty Images The bathing machine at the West Beach Bognor A horse pulls a bathing machine into the water at the beach at Margate in Kent. Photo: Getty Images 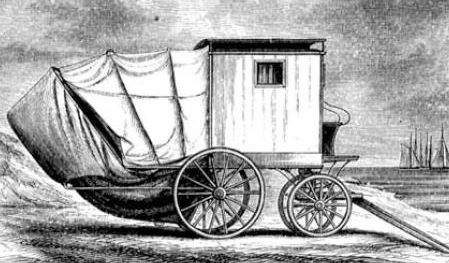 An example of an early bathing machine, equipped with a canvas tent lowered from the seaside door for extra privacy.

By Andrew Piper
3 Mins read
At first glance, Sting does not look like a person about whom you can tell something unusual or show some unseen photos….
CitiesStories

By Anna Ramirez
2 Mins read
While many people think of women samurai as a legend, they did exist. Japanese called female warriors as onna-bugeisha.  Empress Jingu was…
Subscribe
0 Comments
Inline Feedbacks
View all comments